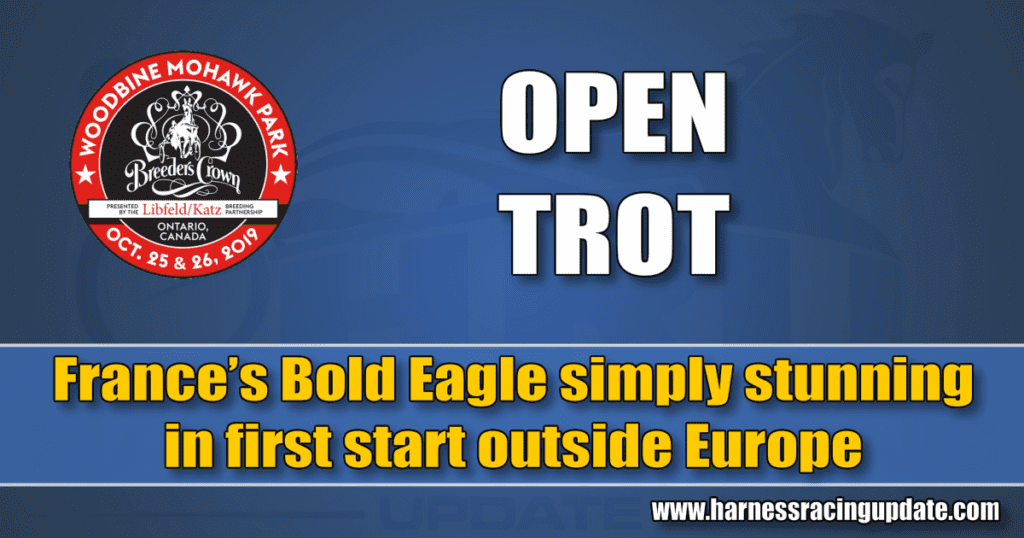 Coming into Saturday’s Breeders Crown Open Trot at Woodbine Mohawk Park, Bold Eagle was one horse drawing a lot of headlines. The French-based son of Ready Cash, out of the Love You mare Reethi Rah Jet, would be making his first start outside of Europe in search of his 46th career win in his 68th career start.

He did not disappoint.

Despite heavy rain, strong winds, the rail draw, and getting slightly worked up on the track during the warm up, Bold Eagle was all business when the race began. He settled in fourth behind the mare Atlanta heading into the first turn, but made a strong move for the lead in the backstretch. He was challenged by Six Pack on the far turn, and Atlanta also made a late run in the stretch, but Bold Eagle would not be denied as he crossed the wire first in 1:52-flat. Six Pack held on for second, while Atlanta was third.

Bold Eagle has won a number of major honors in Europe in his career, including the 2016 Prix d’Amerique, and a French Trotting Triple Crown in 2017, and he can now add a Breeders Crown victory to his long list of achievements.

A trip to the Breeders Crown for trainer Sebastien Guarato, and owners Pierre Pilarski and Thomas Bernereau had been a few years in the making, but even they would not have been able to predict the success they would have when they purchased Bold Eagle from breeder Jean Etienne Dubois following the horse’s 3-year-old campaign in 2014.

“We promised that we were going to come and now we are very satisfied,” Guarato said through a translator.

Bold Eagle was driven by veteran driver Brian Sears, who now has 32 Breeders Crown victories after picking up a pair of wins on Saturday. Sears also drove Winndevie to victory in the 3-year-old Filly Trot final earlier in the night.

Sears said he didn’t have a specific racing tactic in mind for Bold Eagle heading into the race.

“I just know that he’s a good horse and he fits the class and then I just play it by ear,” he said. “The move I was making on the backside, it was pretty bold, but he held on and he showed his class.”

“I warmed him up and he was really rank, but I’ve seen that before over there in France and then once they get behind the gate they are usually fine,” he said.

Bjorn Goop had been Bold Eagle’s driver for the majority of his starts this season, but Sears said he was honored to get the call to drive Bold Eagle in the Breeders Crown when Goop opted to stay in Sweden to compete in stakes races.

“It’s definitely an honor to be chosen to drive a horse like that,” Sears said. “There’s some great horsemen over there, some great drivers. I got to go over there and witness it first hand in a couple of those races and it’s pretty amazing, some of those races with the big fields and the distances they go. It’s pretty impressive, so I’m glad that they thought enough of me to sit behind him.”

Bold Eagle shipped into Woodbine Mohawk Park last weekend under the watchful eye of caretaker Hugues Monthule. He had made nine starts this season in Europe, recording two wins in the Group 1 Prix Rene Balliere at Vincennes on June 23 and in the Grand Prix de Wallonie on Aug. 4. In his most recent start prior to the Breeders Crown, Bold Eagle experienced trouble while finishing second to Tony Gio in the Group 3 Grand Prix de la Federation Regionale du Nord on Sept. 18.