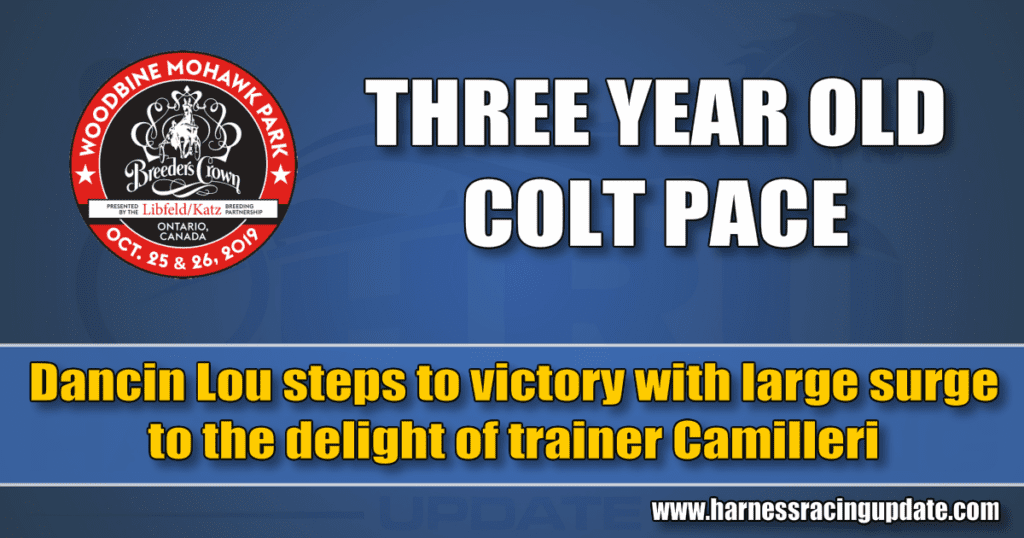 David C. Kryway and 1362313 Ontario Ltd.’s Dancin Lou, expertly piloted by Andrew McCarthy for up-and-coming trainer Tahnee Camilleri, stormed down the grandstand side to upset Bettors Wish and capture a wet and wild edition of the US$600,000 Breeders Crown for sophomore pacing colts and geldings presented by Libfeld Katz at Woodbine Mohawk Park.

Bred in Kentucky by Anvil and Lace Farm, Dancing Lou brought $140,000 at the Lexington Select Sale and he brought racing fans from Down Under to their feet, pacing bravely through a driving rain with a strong wind pushing the field home on a track rated “good.”

The Australian duo of McCarthy and Camilleri embraced in an ecstatic winner’s circle celebration with the driver collecting his fourth Breeders Crown, while the trainer, who gave up a legal career to condition horses, earned her first.

It was not a glamorous night for the Glamour Boys division as the elements conspired to delay the start of the race on multiple occasions with safety pylons blown across the track. But a hearty field, including the 1-2 finishers of the Pepsi North America Cup in $1.5 million earner Captain Crunch and $1.7 million rich Bettors Wish, brought the heat on an otherwise stark night.

Longshot Semi Tough blasted off the gate to assume an early lead with a blinkered Captain Crunch, in rein to Yannick Gingras, settled in second before brushing to the lead through the quarter mile in :26.2.

Bettors Wish left the gate as the 3-5 mutuel favourite in rein to Dexter Dunn, who engineered an aggressive move at the three-eights pole to challenge for the lead into a stiff headwind as the half-mile ticked by in :55.2

Dancin Lou, patiently handled by McCarthy, watched from fourth as the favorites battled themselves and the elements through the turn. Angled outside for the stretch run, Dancin Lou quickly found the wheel of Captain Crunch and continued his momentum to a daring finish in the final stride to nip Bettors Wish in a solid time of 1:50.2.

Earlier this month, Dunn had the opportunity to drive both Bettors Wish and Dancin Lou to victories in separate division of the Tattersalls at the Red Mile. And while Dunn guided both horses to victory in last week’s Breeders Crown eliminations, he could only commit to one option on Saturday night, leaving McCarthy a late-blooming option in the year-end classic.

The margin was so tight at the wire, McCarthy couldn’t be sure he’d stolen the show.

“I thought I did. I had the momentum on the outside. I was hoping I did,” said McCarthy. “I had a little trouble in the last turn getting his momentum going, but then once I got him rolling there, yeah, what a tough horse, he just digs and digs and digs.”

The 32-year-old Camilleri was understandably emotional in the winner’s circle, having witnessed the successful culmination of hard work and a brave decision to restart her training career after practicing law for five years.

“It’s a Cinderella story, I can tell you that,” said Camilleri. “This is unbelievable. There were night when I was laying in bed wondering if I’d made the right decision, but nights like tonight I know that I have.

“You always wonder doing a big career change like that if it was the right decision and 12 months ago, I think on TVG night, I had a horse in one of the undercard races. I was just happy to get a winner on that night. Twelve months later to come here on one of the biggest nights of the year and to be a competitor was such an honor. And then to win the race, I’m the luckiest girl in the world.”

By Sweet Lou, Dancin Lou is out of the modest Cambest dam Dancewiththebest. Following an uneven juvenile campaign in which he won just once, the owners transferred the colt to Camilleri for his sophomore season and were rewarded with outstanding results

“I sold a couple of horses to them last year, when I first came over, and luckily for me they decided to give me a shot,” said the hands-on Camilleri, who also took care of caretaking duties on the evening. “It’s turned out great. I couldn’t believe that it’s turned out as good as it did. I’m very lucky.”

The owners had to wait for their investment to come good and they were patient on Breeders Crown night as the versatile Dancing Lou, who has won with all manner of trips, closed late to pick up the winner’s share of the purse.

“He can come first over, he can peel off for home and he’s got gate speed,” said Camilleri. “There’s no chinks in his armor. He’s a fantastic little colt and I love him.”

Dancin Lou, who is likely headed to the Progress Pace next at Dover Downs, returned $12.80 for a $2 win ticket.