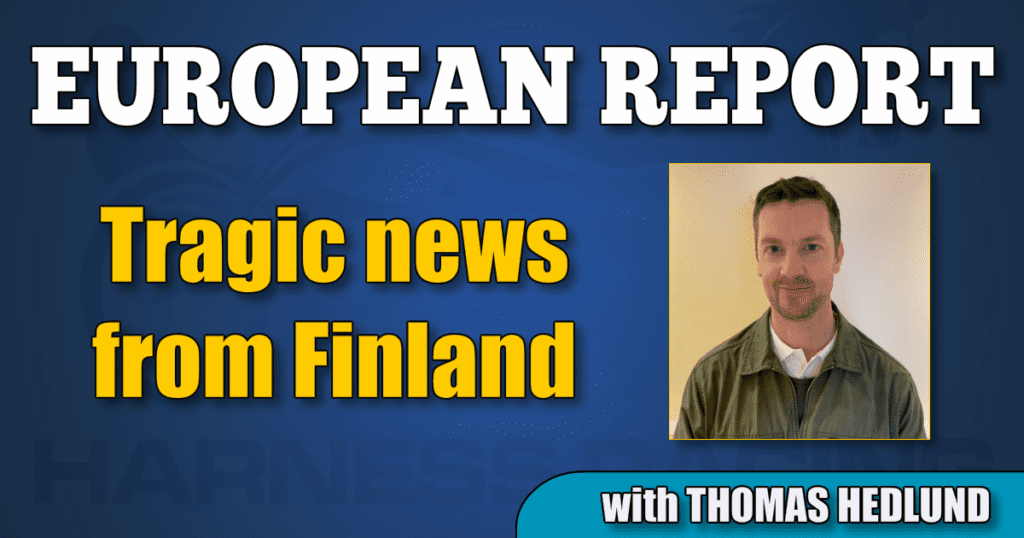 Harness racing in Finland had put its hopes on a 4-year-old budding European star named Graceful Swamp (So Perfect) that seemed to have a bright future in the game. But tragic news spread on Thursday afternoon. Finnish website ravinetti.fi, among others, reported that Graceful Swamp died during a stomach operation this week.

Graceful Swamp was named as one of the toughest challengers to Face Time Bourbon in the $445,000 Grand Prix de l’U.E.T. in Helsinki two weeks ago, but Graceful Swamp raced well below normal standards in the race and trainer Erkki-Pekka Mäkinen suspected that his horse was reduced by some kind of sickness.

“When we arrived to the stable this morning, the horse acted strange with heavy breathing and we went to Tampere, where the veterinarian said that the situation was difficult, so we went to Viiki. But immediately when the operation began, the surgeon said that he couldn’t save the horse”, Mäkinen said to ravinetti.fi.

Graceful Swamp entered the $222,000 Kriteriet in Finland with 14 consecutive wins last year, but made a break in that race. Instead, he showed his capacity in the $280,000 Derby this season. Twenty-nine out of his 36 starts ended with victory and his lifetime earnings reached $453,251.

Jean-Michel Bazire’s Prix d’Amérique winner Belina Josselyn (Love You) made her first start since February when she faced well known opponents in the $89,000 Prix Isara at Vincennes on Tuesday afternoon.

Belina Josselyn showed, emphatically, that she needs more than just one race before the real high-level condition appears. The 8-year-old Love You mare finished last in a moderate mile rate of 2:00.4 over 1.7 miles.

Bazire’s choice in the race wasn’t Belina Josselyn and the champion driver didn’t pick Prix d’Amérique trotter Davidson du Pont to drive, either. Instead, Bazire sat behind Dark Night Love (Royal Lover) who started 25 meters ahead of the more well-known contenders in the race and Dark Night Love held his opponents behind him in a tight finish where Delia du Pommereux (Niky) was a close runner up.

Sayonara best among the 2-year-olds

The $94,500 Svampen for 2-year-olds in Sweden was held at Örebro racetrack on Sunday afternoon and trainer Fredrik Wallin, the man behind the two-times stakes race winner Activated, showed a new talented trotter from his relatively small stable.

Sayonara (Donato Hanover—Moviestar), driven by Carl Johan Jepson, came early to the lead and stayed there all the way to the wire in 2:00.1 over the mile.

Sayonara’s mother, Moviestar, has been promising as a broodmare. Her first foal, born in 2015, is a very well-known trotter in Sweden, Conrads Rödluva (S.J.’s Caviar), who has 12 wins out of 18 lifetime starts, so far, and more than $800,000 registered on her bank account.