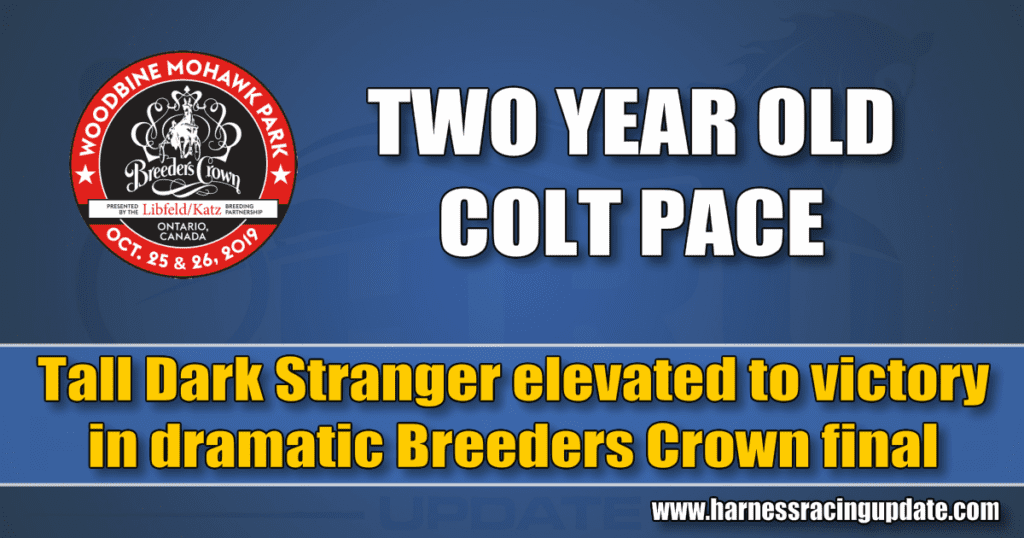 Papi Rob Hanover, in rein to David Miller, battled tooth and nail to the finish with Tall Dark Stranger, under the guidance of Yannick Gingras, with the former bearing in and clashing with his fierce rival before crossing the wire first in the US$600,000 Breeders Crown on Friday for juvenile pacing colts and geldings presented by Fashion Farms at Woodbine Mohawk Park.

Gingras immediately claimed foul and following a lengthy inquiry, Tall Dark Stranger, who had cut out all the fractions but the final one, was elevated to victory as he gained a modicum of revenge on a rival who had denied him a perfect record with a stunning defeat in last week’s elimination.

In addition, Mayhem Hanover, piloted by Doug McNair, was demoted from fourth to fifth for interfering with Captain Midnight, in rein to Andrew McCarthy, late in the lane.

The judges’ decision marked the third occasion in which a Breeders Crown race winner was demoted with a pair of trotters, That Fabulous Face in 1998 and Corleone Kosmos in 2007, disqualified for making breaks.

The pacers blasted off the gate at 11 p.m. Eastern in the dramatic event and it wasn’t until 11:15 p.m. that a decision was rendered, providing a third Breeders Crown score for Nancy Johansson, who trains the Bettors Delight colt for owners Crawford Farms Racing, Marvin Katz, Caviart Farms and Howard Taylor.

“It was tremendously torturous,” said Buck Chaffee, co-owner of Caviart Farms. “We were so let down and then, ‘What’s going on?’ and it took forever and then it sounded like it was a legitimate problem. Talk about high-low, high-low kind of stuff… that’s what it was. It was amazing.”

Johansson wasn’t holding her breath in the aftermath of the rock ‘em sock ‘em finish.

“Well, I’ve been on the end where I thought they should’ve taken horses down and they didn’t either,” said Johansson. “The judges, you have to credit them, but when a driver like Yannick puts in an objection, you know it’s for real. They are not going to put in an objection unless they think that they have good cause.”

As the inquiry ranged on, with year-end honors and the hopes of fans and bettors hanging in the balance, Johansson was busy caring for her star pupil.

“Mainly, we wanted to give him some water, because he came off the track and I was like ‘Bring him into the spit box before you give him anything!’” said Johansson. “They brought him in there and gave him some water and he was probably, like, ‘What the hell are these people doing, why am I not getting a bath?’”

“He was born in Kentucky, but he’s Canadian,” joked Johansson. “And when we walked out here, he was probably thinking, ‘Usually, I go to the winner’s circle right away’ because he’s been here a few times. He’s just a super special colt and it showed tonight and I think it will continue to show.”

The tumultuous Breeders Crown final was the continuation of a rivalry launched in September when Tall Dark Stranger bested Papi Rob Hanover in the Metro Pace elim. Despite being second choice in the $750,000 Metro Pace final, Tall Dark Stranger pulled the pocket and overtook favored Capt Midnight before holding off a furious charge from Papi Rob Hanover to secure a half-length win in a stakes and track-equaling record of 149.1.

In the aftermath of that loss, Johansson reported blood issues with her precocious colt who she quickly nursed back to health, while switching from steel to aluminum front shoes for the fractious final.

“He had rough blood work [after the elim], but some antibiotics helped clear that up,” said Johansson. “I’m just happy that he was better, because that’s my job. What happens on the racetrack is the driver’s job. Making sure he was right at the line, that’s my job.”

Bred in Kentucky by James L. Avritt, Tall Dark Stranger was purchased for $330,000 at the Lexington Selected Yearling Sale. The regally bred bay is out of Precocious Beauty, a career earner of $869,920 who was the 2013 Dan Patch Award winner in the 2-year-old pacing filly division.

The talented Johansson, the daughter of legendary trainer Jimmy Takter, still has a ways to go to match the 34 Breeders Crown wins notched by her famous father. Takter, who accompanied Johansson to the Lexington sale, recalled the moment they first put eyes on Tall Dark Stranger.

“When we saw this colt, I said, ‘Nancy, whatever you do, do not leave this sale without this colt,’” said Takter. “We put the group together and fortunately we have great owners and they stepped up and bought this colt.”

Takter said the colt reminded him of $1.4 million earner Cabrini Hanover, who won the 2004 Shes A Great Lady at Woodbine.

“This horse was just, to me, very unique,” continued Takter. “I had that feeling when I bought Cabrini Hanover. You don’t get that feeling that often, but this colt is just unique.”

Chafee said she is hopeful Tall Dark Stranger will be on the winning end of future battles with his familiar foe.

“Papi Rob is a great colt, too,” said Chafee. “Those two are really good and they are going to duke it out some more, I’m sure.”

But the next bout may have to wait until their 3-year-old campaign as a cautious Johansson cares for her courageous colt.

“We’ll pull more blood work. I just want to make sure that he’s healthy,” said Johansson. “I want to put away a healthy horse and I’m not going to jeopardize him with a couple of more races. He’s the Metro winner and the Breeders Crown winner and, at this point, he doesn’t really have much else to prove.

Tall Dark Stranger, sent to post as the 9-5 second choice, was perfectly prepared for the event by caretaker Katie Remerswaal. He returned $5.80 for a $2 win ticket.