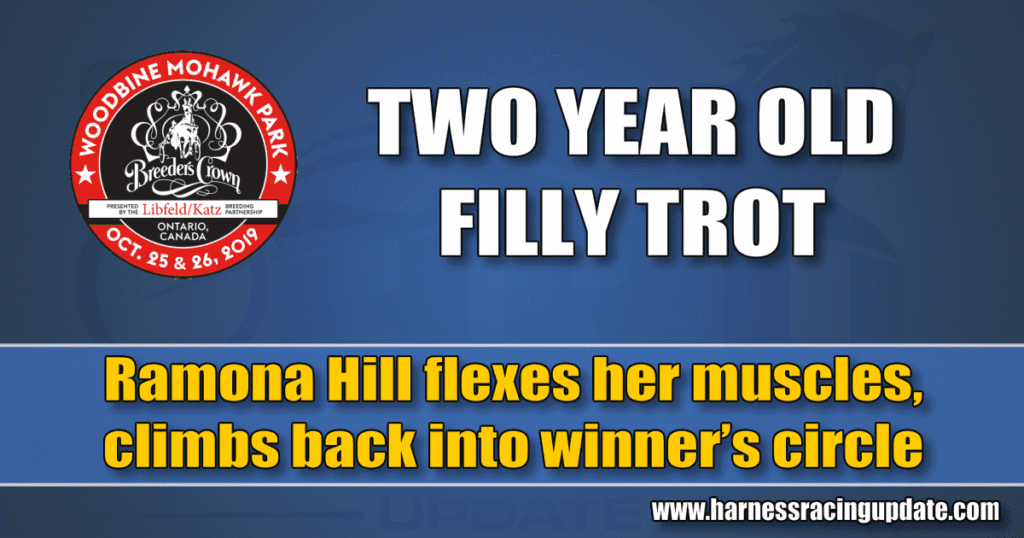 Ramona Hill flexes her muscles, climbs back into winner’s circle

Sometimes first impressions can be deceiving. But trainer Tony Alagna expected Ramona Hill, a daughter of Muscle Hill—Lock Down Lindy, would one day leave a lasting one.

When Alagna zeroed-in on Hip #42 at the Lexington Yearling Sale last fall, he saw a good-looking, but immature filly.

The decorated conditioner was certain the horse that would become known as Ramona Hill could be another special one, something he reminded himself of after she won her division final of the $330,000 Norman Woolworth Memorial Bluegrass Stakes in September.

On a cool autumn night at Woodbine Mohawk Park, she showed just how special she is in the Breeders Crown 2-year-old trotting filly final.

The odds – and post-position – weren’t in her favor, but Ramona Hill managed to get back on the winning track in style.

After her five-race win streak came to an end in last Friday’s Breeders Crown elim, the obvious question was: Could she bounce back?

It wouldn’t be easy.

Saddled with post 10 in the $786,000 final certainly didn’t help her chances. The tote board, which displayed 14-1 beside her number as the gate swung open, suggested she had an outside shot, at best, to take all the spoils.

Andrew McCarthy and Ramona Hill, however, had other plans.

Blasting to the front, Ramona Hill took her rivals through an opening split in a brisk :27.1, as second choice Sister Sledge, and mutuel favorite Hypnotic AM, kept close tabs on the pacesetter.

After a half-mile trotted in :56, Brian Sears and Hypnotic AM charged to the lead, taking the field through three-quarters in 1:23.4.

A confident McCarthy moved Ramona Hill to the outside in mid-stretch, and the duo quickly gobbled up ground on the leader, powering by with ease to notch a four-length score for her biggest payday to date.

Sister Sledge was second and favored Hypnotic AM was third.

Alagna breathed a sigh of relief when Ramona Hill and McCarthy got their wheels in motion early.

“He has a ton of confidence in the filly and we do as well, and he knew having the 10-hole that he was going to have to make something happen when the gate folded and he did and she was phenomenal. I was very happy. Then when the quarter came up in :27 seconds, I said, ‘Okay, back off.’ So he backed off and when the other filly came, who was the favorite, he did the right thing rather than take that filly on and have to use her that hard. He let her go and used her as cover and when she got room, she just blasted off. That’s the kind of filly we thought she was and she showed it tonight.”

It was sweet redemption for Ramona Hill, who was sent off at 2-5 in her elim and finished third in 1:54.1. She had won the first five races of her career.

Brad Grant gave the effort from post 10 a 10-out-of-10 mark – not that he appreciated the outside draw.

“I can’t repeat what I was thinking,” said Grant, who co-owns with breeder Crawford Farms, Robert LeBlanc and In The Gym Partners. “Obviously, listen, we’re just happy to be there. We believe that she can get out of there and she proved that she could. Again, after Wednesday and Tony saying that he was really comfortable with her, we were fine.

“Well, Tony knew after the race last week… Andrew said that she didn’t seem like herself, so they did some work and trained her up this week. I was here for the draw on Wednesday and Tony was pretty confident that she would be herself tonight and when she left the gate I felt real, real good that we had a great chance. Andrew has done a great job driving her all year long, so he got her out of there quick, got her covered and she just blew them away from there, so it’s great. It’s great.”

Added co-owner John Fodera, “I can’t say much more than what Brad said already, I’m just grateful to have partners like that and both Tony and Andrew have done a great, great job with her. So, here, I’m the coat-tail effect, so to speak. I love it.”

Grant even managed to collect a little more than his slice of the top purse prize.

The longtime owner put down a wager, albeit somewhat modest, on his star rookie trotter.

“Actually, I had five-across,” he said with a laugh. “Just a sentimental bet, but that’s it.”

Alagna was somewhat sentimental too.

He recalled the time he first saw Ramona Hill at the sale and what went through his mind.

“You know, you always buy them hoping they turn out and you buy a great pedigree and a great individual and you hope everything works out, but, as we know, more times than not, it doesn’t work out. But the mare was so special and she had ability, so when she came along being a Muscle Hill, I wanted to take a shot with her. She wasn’t expensive. We gave $70,000 for her.”

“She had the same style, same look, same frame, so that’s why it was a no-brainer decision to buy her. The funny thing about it is, that’s the only trotter I bought last year at auction. I bought one trotter and it was her.”

Now, it appears Ramona Hill will get a break ahead of her 3-year-old campaign.

She’ll eventually make her way to the Sunshine State for a well-earned rest.

“I think we’re done with her now and let her grow and bring her back,” said Grant. “She’ll head to Florida and… maybe Carolinas for a little while and get some rest, then down to Florida.”

Ramona Hill, whose caretaker is Fiona Reynolds, paid $31.80 for the win.