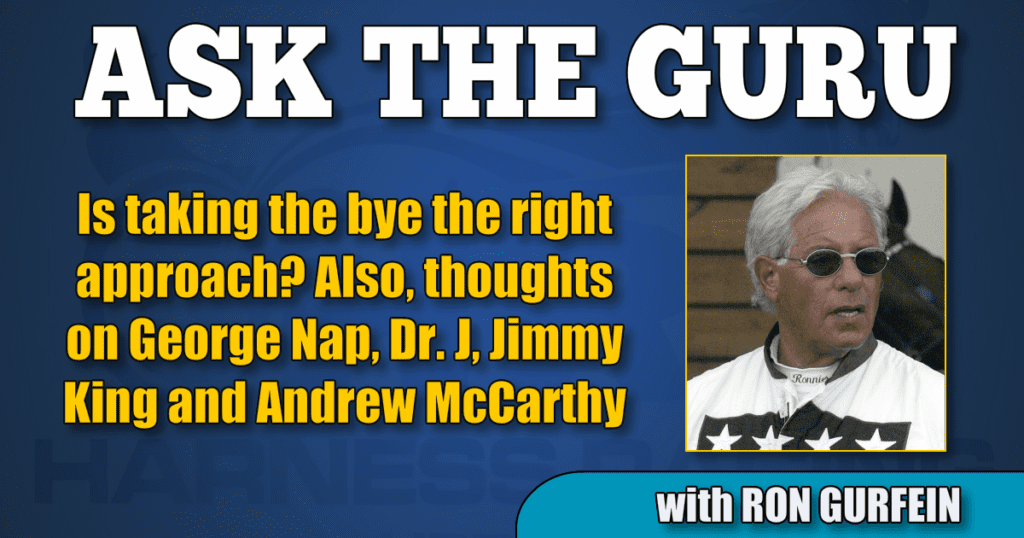 Tidbits: It’s sales time once again and the usual suspects may be seen lurking around some breeding farms on any given day — simple guys like me, Perry Soderberg, Chuck Sylvester and the Alagna and Burke brigades. The one you won’t see may be the best of all — her record for 2019 is utterly amazing.

I speak of the pride of Hanover, Dr. Bridgette Jablonsky. She bought into three yearlings last year all in the $50,0000 vicinity, give or take a thousand. Elver Hanover is the co-fastest 2-year-old of all time (not eligible to the Breeder Crown at two), Marloe Hanover and Wine Rack Hanover are both participants in Crown finals tonight. If that’s not talent, what is?

I am not a gambler, but to my readers that have that interest I will share a thought. There are many betting angles, first time Lasix, first time geldings, first time claimer, first time Yannick, first time Dexter, all we have heard before. How about first time Jim King Jr.? Truly amazing. Shartin N is not just the leader in the polls, but has been a game changer to her trainer who just may garner trainer of the year honors.

According to USTA statistics, King has won $16 million as a trainer since 1997. Amazingly, almost $8 million in the last three years including $3,450,000 in 2019 and that could well increase tomorrow night with two odds on Breeders Crown prospects. He is averaging almost $8,000 per start whereas leading trainer Ron Burke is averaging $4,000. Let’s call it the Shartin years.

Recently, I heard Andrew McCarthy referred to as a second-tier driver. McCarthy’s stats alone dispute that. He is 15th in North America with some $5.3 million in earnings, but the numbers next to a driver’s name are not always the benchmark of his ability. The clients he has to drive for are part of the equation. Not only do I think he is a top driver, I love the fact that he always protects his horse and there is always plenty left for next week.

I truly resent Dan Leary’s comments in Sunday’s HRU Feedback (2019-10-20 HRU Feedback). Because my honesty hit a note with him is no reason for him to attack my integrity.

To begin with, Tom Tobin is indeed a very good friend. At one point when I lived in Lexington I had the pleasure of dining with Tom and his wife Vicky many times as Ms Vicky and my girlfriend Linda were best of friends. Tom actually gave me a book he has written on equine drugs and added a lovey page long inscription. I am a true foodie as many are fully aware and I remember Tom being at a dinner we had at home for some “friends” and Art Zubrod of Brittany Farm and Fletcher Mauk president and CEO of Small Batch Thoroughbreds combined to make the finest Gnocchi I have ever eaten. To suggest that he is not my friend was obviously not called for.

Later in Leary’s letter he quotes Dr Tobin in reference to misinformed speculation. Tom definitely did not direct that at me as Leary insinuated and I am positive that Leary asked him he would have a high regard of my knowledge of the problems facing the industry.

A few weeks ago I wrote an article proposed by a very prominent veterinarian on how to curtail a majority of the cheating in the sport. You would think someone somewhere would react and ask further questions. NOTHING.

Unfortunately the powers that be like the status quo and fear reprisal from change. That is where things stand and until some commissions join in the fight there will not be one and rampant drug abuse will continue.

If only one venue would change the testing profile as I have suggested and were successful in just reducing the criminal element other racing venues would immediately follow suit. The attempt by just one commission is all we need to get the show on the road.

There were 15 races carded and 11 were won by the duo — six by Yannick and five by Dexter. We are in for quite a weekend of finals.

Dean Romano asks: With 10,000 wins, why does a driver as gifted as George Napolitano not get top stakes horses to drive?

This one is easy. Georgie Nap is to eastern Pennsylvania what Dave Palone is to Western Pennsylvania. Both talented, both like to stay at home and prefer not to go on the road and rule the roost at their home racetracks. David, whose personality is more outgoing, traveled more as he got older but basically not very far. George the more introverted of the two, seems very content to me doing “his thing.”

Note: Chris Oakes had George drive Homicide Hunter for him in the Breeders Crown at Pocono last year and it was his George’s first drive in a Crown final — and a winning one. He is an excellent reinsman and a very nice guy.

Clay Horner asks: We see very different approaches to the Breeders Crown eliminations by division leaders — Greenshoe and Real Cool Sam decline and Tall Dark Stranger and Warrawee Ubeaut both go. Which approach do you think is best? In particular with Greenshoe, who doesn’t leave the gate hard, how concerned would you be with risking an outside draw for the final?

It’s a hard question to answer unless you are on top of the situation. Sometimes the morning of the draw a colt is a little off his feed or has a low temperature, We are not privy to the inside scoop on how these decisions were arrived at.

For discussion purposes, let’s assume that all was well. Then it comes down to what the individual needs of the horse was — how much time between races he can go and still be tight. In the case of Greenshoe, Melander made a mistake going too long without a start before the Hambletonian, and the colt was way too fresh and full of himself and it turned out to be his demise on race day. Hopefully that situation will not repeat itself Saturday evening as a similar amount of time has lapsed.

As for the others, for Nancy Johansson, Ronnie Burke and Jimmy Campbell, this is far from their first rodeo and far be it for me to second guess their decisions.

Nancy certainly made the right choice because Papi Rob Hanover defeated Tall Dark Stranger in the elimination and the race will surely help her colt going forward into tonight’s final. In no way am I predicting a Tall Dark Stranger victory, just the possibility of a tighter finish. Don’t miss this one!

As for the draw, two of the entrants that took the bye got the shuffle, Real Cool Sam and Forbidden Trade. As for Greenshoe he came through unscathed drawing post four.

To quote John Campbell, “it’s not important where you start, it’s where you finish.”

Try to make it to the Crown this weekend, it will be a special event. If you are going to Harrisburg please bring some questions with you and introduce yourself to me at the sale. I love to meet my readers. Have a wonderful week.