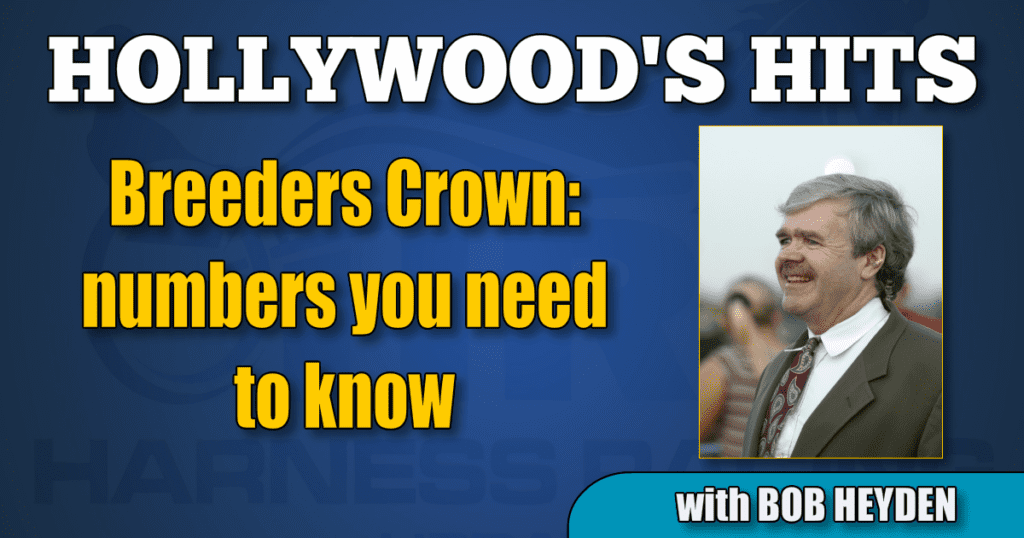 5 the number of wins David Miller had the last time the Breeders Crown was held in Canada.

37 year since No Nukes raced. He is the sire of the dam of Caviart Ally, the chief nemesis to Shartin N in the mare pace.

10 Sweet Lou snapped off 10 in a row against the best pacers in the world in 2014. His daughter Warrawee Ubeaut has 10 wins on the year. She is the one to beat in the 3YOFP. She is the one who lowered his 1:49 flat freshman mark — she did it last year, seven years after dad became history’s fastest freshman. She did him 2/5ths better.

14 years since Brett Pelling last won a Breeders Crown — and he did it in style wrapping up Horse of the Year honors in 2005 at the same time with Rocknroll Hanover. He’s got two good chances with Papi Rob Hanover, the Metro runner-up and Caviart Ally.

12 Gimpanzee began his career with 12 straight wins and that included an impressive Breeders Crown score at Pocono a year ago in the 2YOCT.

2 the number of Little Brown Jug finalists that have made it to the Breeders Crown — Southwind Ozzi and Semi Tough.

7 the number Hambletonian finalists that are in the Breeders Crown.

1 Can Bob McClure do what Trevor Ritchie did first — win his first Breeders Crown and his first Hambletonian in the very same year? Ritchie had a bang-up year in 2000, capturing the Hambletonian first with Yankee Paco, then going three deep in the Breeders Crown with Aviano, Banker Hall and Syrinx Hanover. McClure won this year’s Hambletonian with Forbidden Trade.

0 Breeders Crown starts for Jimmy Takter, who retired last December. Remember, he won six the last time the Crown was held in Canada.

38-79 the win and starts, combined, for the Marcus Melander entries over the two Crown Nights.

Tim Tetrick, the leading money-winning driver from 2007 through 2013, missed the 2011 Breeders Crown at Woodbine due to a snafu getting to Toronto due to the freakish snowstorm in New Jersey.

These are the horses he was scheduled to drive in the 2011Breeders Crown at Woodbine — and how they did:

That’s right around $1.1 million in purses.