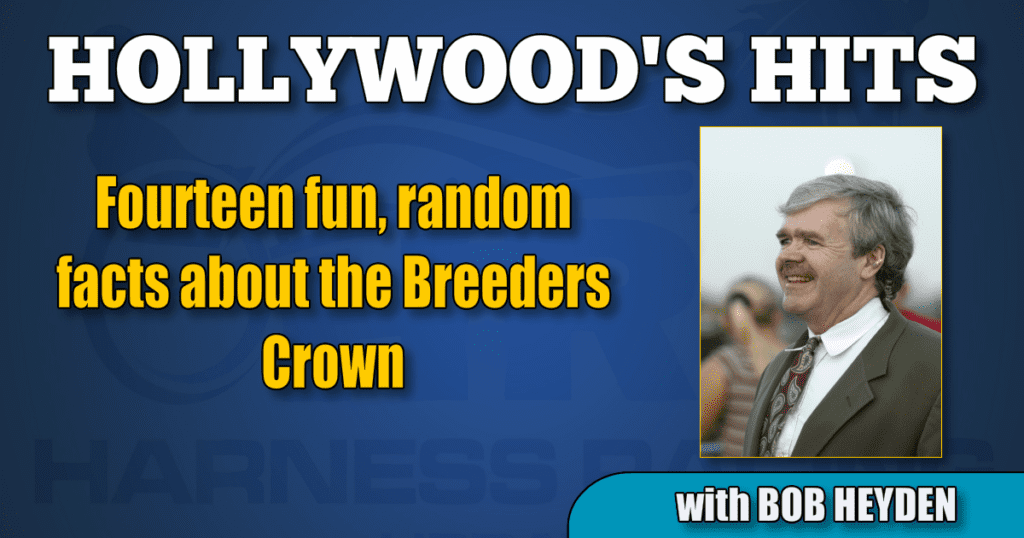 1. In 1988, Steve Elliott just missed becoming the first trainer to win three Breeders Crowns in one year. He missed by a head with division champ Totally Ruthless and won the Crown with Valley Victory and Sweet Reflection. (Bob McIntosh in 1993 was the first to post a three-bagger).

3. John Campbell’s Breeders Crown finale was a solid second with L A Delight for trainer Bob McIntosh in 2016. The race was won by Call Me Queen Be.

5. Another Miracle was the 3-2 favorite (finishing fifth) in the very first Breeders Crown race held on Oct. 5, 1984 at the Red Mile. Workaholic was the winner.

6.That Arch Madness competed in SEVEN Breeders Crowns and got checks SIX TIMES? The only time he missed one was his last try-2014-6th-at age 11.

7. Me Maggie had a way of rising to the Crown challenge. Her first win in the 3yoft Breeders Crown in 1990 came with her having just one win on the year going in. In 1991, she was a repeat Crown winner and it was her first win of the season.

8. In year one of the Breeders Crown (1984), there were eight races, eight venues, and five of the eight winning drivers were Hall Of Fame bound. The fastest mile was posted by a 2-year-old — Dragons Lair in 1:54.1.

12. Rocknroll Hanover is gone six years already and is still the only sire to have a double-millionaire from his first crop — male and female: Rock N Roll Heaven and Put On A Show.