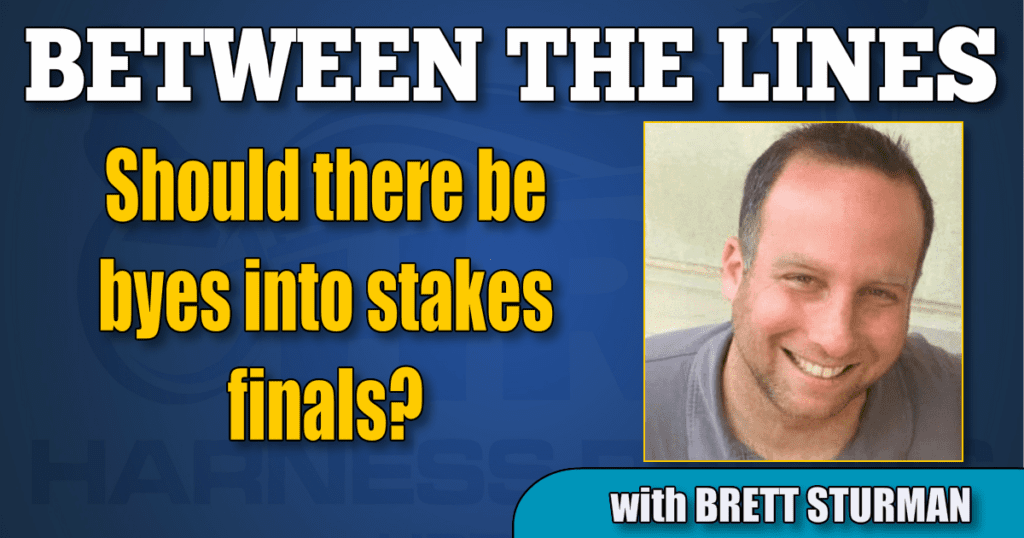 Should there be byes into stakes finals?

In Breeders Crown eliminations this weekend at Woodbine Mohawk Park, some of the biggest names are absent from the program. It’s not because they haven’t entered, but because they’ve been issued byes to go directly into their respective Breeders Crown finals next weekend. In the process, it raises the question – should horses be given passes into the Crown finals without having to first compete for it in an elimination?

For starters, I get the idea for it. Horses who have earned the most money in their divisions should have their lives made easier by going straight to the finals, like the way an NFL team gets a bye in the first round of the playoffs. But, do these types of horses need to be put in more advantageous positions than they already are? Between byes and other races that allow horses to pick their posts, it seems things are being made even easier for horses that don’t necessarily need the help. It’s not that successful horses need to be handicapped, but giving them the same treatment as any other horse seems to be most fair thing.

At the heart of the argument is that everyone should have to compete. In all likelihood would it really end up mattering if Greenshoe was forced to race in elimination and pick off one or two horses in order to qualify for the final? Probably not. But you never know what can happen in a race.

As a case in point, one only has to look back to the 2018 Hambletonian. The leading money earning in the 3-year-old trot division heading into that day was Six Pack. He ended up having a nightmarish elimination where everything that went wrong did, and he failed to even make the final as the heavy favorite. Let’s say he had been able to accept a bye in to the Hambletonian final as the richest money earner – it would have changed the entire complexion of the event as he arguably may have been the best horse that day.

Going back further in time, the all-time-great Niatross won the Meadowlands Pace final but only after, ironically, his defeat in a Meadowlands Pace elimination would go down as one of his greatest races. Breaking stride in the race, he made a miraculous recovery to somehow get the final qualifying spot before going onto romp in the Pace final the next week. Both the Niatross and Six Pack cases are the ones that first come to mind, though I know there’s countless others. It goes to show the unpredictability that elimination races can have no matter how heavy the favorite.

In a way, I suppose that byes for top horses exist to protect against those very situations. But all horses are required to pay the same stakes fees and should be required to race their way into the final through an elimination. In addition to automatically having a spot assured, another obvious advantage is that horses can stay fresh by not having to compete the week before. This can make a world of a difference for one of the top contenders in need of a week off, while a similar contender may have to exert itself in an elimination. In nearly every instance of a bye this year, a horse wouldn’t have trouble finishing in the top eight out of 10 or five out of seven, but it’s another instance of providing top horses luxuries that don’t necessarily need it.

To that point, and to their credit, there are horses that had qualified for byes but whose connections turned them down and will race in the eliminations instead. That includes the 1-2 finishers in the Metro stakes, Tall Dark Stranger and Papi Rob Hanover in the 2-year-old pacing colts’ division. Also declining a bye was Ron Burke on behalf of his star filly Warrawee Ubeaut in the 3-year-old pacing fillies’ race.

This may seem contradictory, but I’m not opposed to scenarios where winners in elimination races cannot land an outside post in a final. In these cases there is some reward for performing well in an elimination, but it’s more of a safeguard against being assigned a disastrous post in the final that truly could inhibit a horse’s chances to win.

That’s different though than skipping an elimination altogether. Being tasked to overcome post 8 on a half-mile track is not the same as having to show up and race in an elimination where you only have to beat a few horses to make the final.

The only place where it does make sense is when looking at it from the standpoint of a track or the industry wanting to have its brightest stars present on one of the night’s biggest stages. It wouldn’t seem right if the division’s best horse wasn’t in the final due to an unfortunate circumstance in an elimination, but in those limited instances, eliminations should still be held and let the chips fall as they may.

There does exist other stakes races throughout the calendar where the highest money earners are the ones that get into the stakes with the highest purses. In these races, horses are rightfully rewarded for their on-track success and monies earned. But the purpose of elimination races should exist strictly to determine which horses go onto the finals and which ones get eliminated. It should apply to everyone.