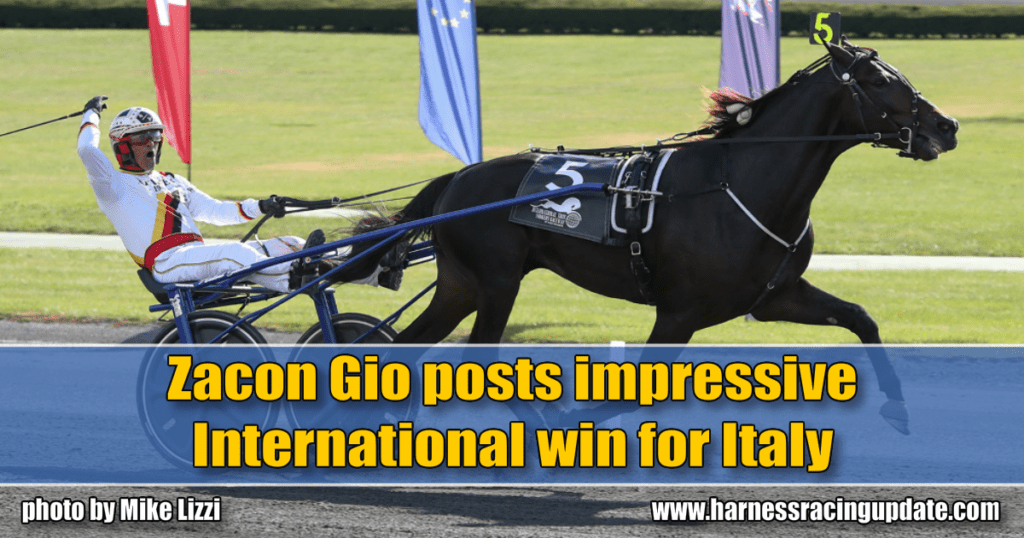 The victory was the 4-year-old’s 12th consecutive win and the first outside his home nation.

Holger Ehlert has been buying and training trotters for most of his 55 years, long enough to know that pedigree is only one element to consider when evaluating a prospect.

For that reason, he did not hesitate to pay $3,000 for a yearling by unproven stallion Ruty Grif out of the Yankee Glide dam May Glade Font SM. He thought he would take a shot with a youngster that came to be known as Zacon Gio.

Zacon Gio proved to be the horse of a lifetime, as well as the toast of Italy, when he dominated the $1 million International Trot on Saturday (Oct. 12) at Yonkers Raceway for his 12th consecutive victory.

It was only the third triumph for Italy in the 41-year history of the International. The other Italian representatives to prevail were Delfo in 1977 and Twister Bi only two years ago. The United States has used home advantage to win more often than any other nation with 14 victories, closely followed by France with 12.

The tradition-rich race began at old Roosevelt Raceway in 1959 and eventually went on a 20-year hiatus. It was revived by Tim Rooney five years ago, but faces an uncertain future following Rooney’s sale of Yonkers Raceway to MGM Resorts at the end of January. Ed Domingo, senior vice president and chief financial officer for MGM, said the race must be evaluated from a business standpoint as well as its place in the history of the sport (full story here).

Giuseppe Franco purchased Zacon Gio for far more than Ehlert paid once the trotter started to show promise. “I’ve had many horses for many years,” he noted, also assisted by an interpreter. “This particular horse, I knew there was something special about him.”

Franco said the victory came at a good time because the industry has been struggling in Italy. Investment is needed from new owners.

“People won’t feel discouraged,” Franco said. “They will feel there is hope for them, too.”

Still, he had never competed outside of Italy and not all trotters adapt well to the half-mile oval at Yonkers. It is not uncommon for top contenders to lose all hope early by breaking stride due to the suddenness and frequency of the turns.

It was therefore somewhat surprising to many onlookers when Zacon Gio was sent off as the even-money favorite against a superb mare such as Atlanta. The connections of the winner were not surprised, though.

Zacon Gio left early from post five in a classy field of 10 and quickly assumed a good striking position in fourth. Atlanta, a stellar mare driven by Yannick Gingras, was allowed to have things her way for much of the way. The opening quarter of a mile went in a slugglish :28.1, with the half in a very comfortable :59.

According to Vecchione, a winner of more than 5,000 races in his career, his biggest job was to keep his horse on hold.

Vechhione kept biding his time. “I was not worried,” he said. “In the end, I know this horse is going to be there.”

Indeed, Zacon Gio more than got there. He roared past Atlanta, bidding to become the ninth mare to win the International and the first since the race was revived five years ago only to come up empty. The final time was 2:24:1.The winner paid $4.30.

Zacon Gio won for the 21st time in 30 starts with two runner-up finishes and two third-place showings. He boosted his earnings to $996,834.

“He’s always playing. He’s like a young horse,” Vecchione said. “But when there is a race, he knows what to do.”

Denmark’s Slide So Easy placed second. Marion Marauder of Canada did well to be third despite soft fractions with the United States’ Guardian Angel AS taking fourth. Sweden’s Cruzado Dela Noche, the defending champion, could do no better than fifth.

Brad Grant, part of Atlanta’s ownership group, admitted he was surprised by the way their mare packed it in.

“I thought she could have finished better, but something obviously wasn’t right,” Grant said. “We’ll regroup and go from there.”

Franco was asked if he would like to bring Zacon Gio back to Yonkers to defend his title if the race is continued. His emphatic “Yes!” did not require an interpreter.