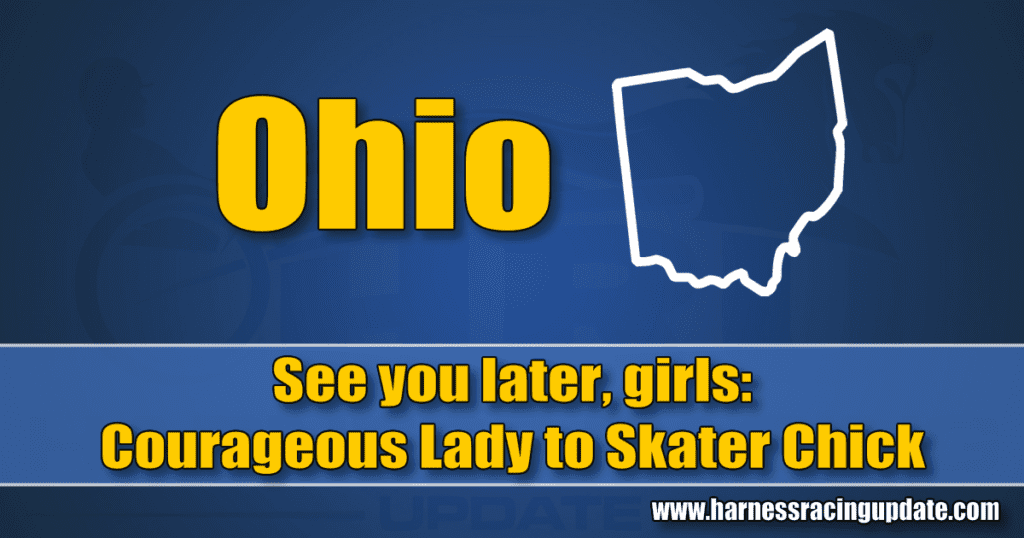 With exactly one race for horses and geldings on the 14-race card, Saturday night was definitely ladies’ night at Northfield Park. The $120,500 Courageous Lady headlined the evening, attracting seven 3-year-old distaff pacers to Ohio’s half-mile “Home of the Flying Turns.”

Early second choice #3 So Awesome (p, 2, 1:53.3h; $446,113 before October 12) also came into the Courageous Lady with four 2019 victories. The Scott DiDomenico trainee was teamed up with Dave Palone for the first time in the Grand Circuit filly stake.

So Awesome went to the early lead and reached the opening quarter in L27.4, followed by a single-file #1 Shes Allright (Ronnie Wrenn Jr.), Skater Chick, and Jk American Beauty. As the field rounded the second turn, Palone’s filly sustained her lead to the 57 flat half, but soon saw pressure coming overland in the form of the first-over Skater Chick, who was followed second-over by Jk American Beauty. By the 1:25.1 three-quarters, announcer Ayers Ratliff declared So Awesome and the oncoming Skater Chick “on even terms”, with an eager Jk American Beauty seemingly poised to tip three-wide behind the sparring leaders. As So Awesome gave way and backed down, Skater Chick accelerated to the wire in a final time of 1:53.1, with Jk American Beauty just over two lengths back in second. The sole Ohio-bred in the field, #7 Rose Run Uptowngal (Chris Page), closed to complete the triactor.

Skater Chick (Sweet Lou—Ram Rocker, by Rocknroll Hanover) had finished third for Callahan and trainer Mark Harder in her prior start, a $30,000 division of the John Simpson Memorial Oct. 2 at Harrah’s Philadelphia. Bred by Diamond Creek Farm and purchased for $25,000 at the 2017 Lexington yearling sale, the 2019 Courageous Lady champ is owned by Donald Lindsey of Fergus, ON; Paul W. Kleinpaste of Orangeville, ON; and Garth S. Bechtel of Caledon East, ON.

Skater Chick provided her reinsman with a major win on his first night driving at Northfield. Callahan told interviewer Dave Bianconi, “You know, with scheduling conflicts, I just didn’t have the right horse to come for it” previously, but he was familiar with Skater Chick and liked her chances. “Mark (Harder) had her last year as a 2-year-old,” said Callahan, who knew the filly’s style well enough to pilot her to the victory. “If you look at her last few lines, at The Meadows, Tony Hall drove her and she was first up both times” in a pair of place finishes. Skater Chick recently returned to Harder’s barn after an Ontario sojourn with conditioner Donald Lindsey earlier this year.

“She does get a little rough in the turns some,” said Callahan, who nonetheless enjoyed a smooth ride behind the 2-1 winner. He told Bianconi he hoped to return with another filly in 2020: “We’ve got to defend the title next year, right?”

The Courageous Lady Pace, formerly known as the “Lady Catskill”, moved from Monticello Raceway to Northfield Park in 1990. It was renamed in honor of the Ohio-sired champion Courageous Lady (p,3,T1:54.4; $418,256), whose owner Ruth Cohen outlived her terminal cancer prognosis by several years as she followed her filly’s racing career.

On the undercard, Mary Birkhold gave #5 Bestinthebusiness his second victory of the year in the first of two Pace for the Cure events. The 11-year-old gelding successfully chased down tiring leader #3 Fusion Five (Rachel Kaneoka) in the stretch. “(Trainer) Brett (Boyd) told me the horse could leave and I said, ‘Well, let’s see how it goes,’” Birkhold told Dave Bianconi. “It makes it an extra-special win, because it’s a breast cancer race.”

In race 8, the second Pace for the Cure race, #5 Clouseau Hanover (Madison Cullipher) fended off a first-over #2 Blue Spanx (Jayme Weller) for the 1:56.1 victory. However, an inquiry against the unofficial winner resulted in a placing: Blue Spanx was moved up to first, and Clouseau Hanover set back to third for obstructing the passing lane. Despite a scratch in each of the two races, 17 female drivers took part in the 2019 Northfield Pace for the Cure, a fundraising promotional night in support of the American Cancer Society.