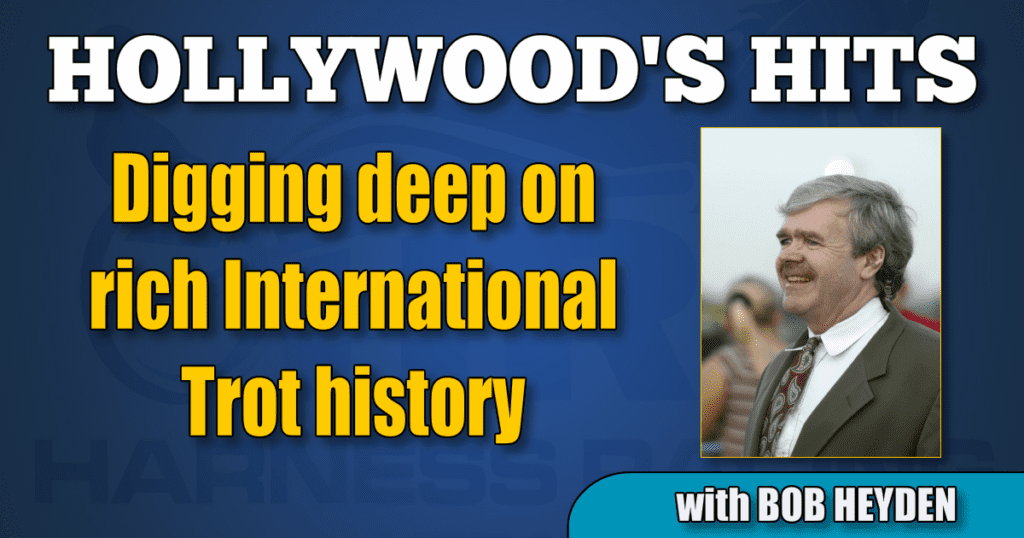 The International Trot was contested at Roosevelt Raceway from 1959 to 1987.

Jamin won the first edition, and many remember the ‘Artichoke’ story associated with him generated by publicist Joey Goldstein. But many forget that two years later, Jamin, during the week of the third edition of the International, was lonely and was brought his own goat by Tina Louise, three years before she starred as Ginger on Gilligan’s Island.

This year marked the 60th anniversary year of first era of the race and the 50th anniversary of Une De Mai defeating a pair of Horses of the Year in 1969 — Nevele Pride (1967-1968-1969 HOY) was second and Fresh Yankee (1970 HOY) was third. Une De Mai repeated as International champion in 1971 and when she was officially at Roosevelt in 1974 she was the richest of all standardbreds.

Of the 29 Internationals held at Roosevelt, the USA and France were tied with 11 victories each.

Su Mac Lad and Stanley Dancer became the first repeaters in the International, taking it in 1961 and 1963. Oddly, Su Mac Lad was the HOY in between International victories in 1962.

Peter Haughton won the last two Internationals he drove in — at age 23 and 24 in 1978 and 1979 with Cold Comfort and Doublemint, respectively.

Cold Comfort was to attempt a repeat in 1979, but a stall injury on the eve of the race necessitated his scratch.

The International used to be part of a three race package: The American Trotting Championship, Roosevelt International and Challenge Cup.

The 1972 International winner, Speedy Crown, interrupted a streak of what could have been nine straight female winners. Speedy Crown, the sires of the richest female trotter, Moni Maker, is still the #1 trotting sire by progeny earnings of all time with over $103 million made (Balanced Image at $102 million is second).

Norway and Sweden won the last two Internationals at Roosevelt (1986 and 1987), respectively and then it moved to Yonkers in 1988 when Mack Lobell proved the best.

Fresh Yankee was a six-time Canadian representative in the Roosevelt International.

Five times at Roosevelt a driver won the International back to back.