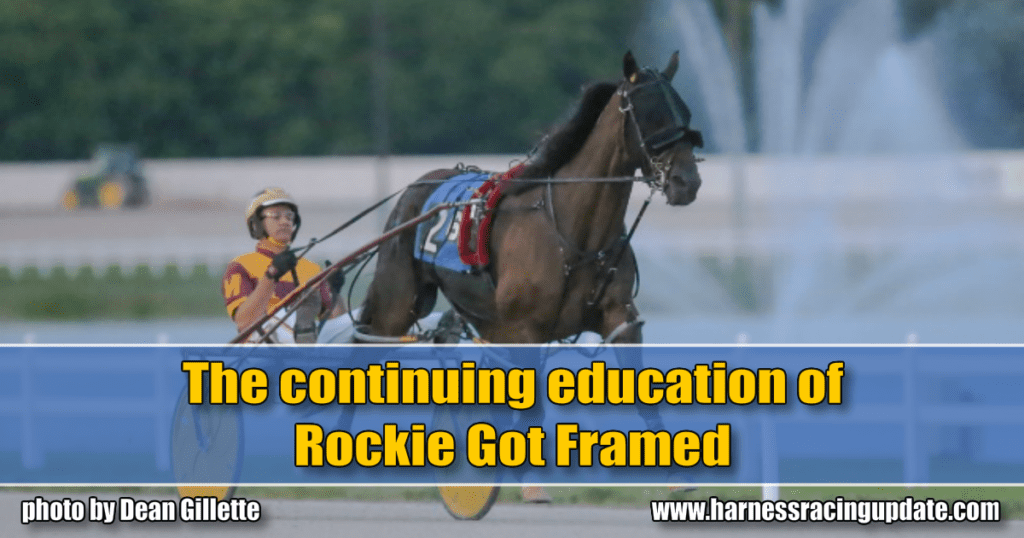 The continuing education of Rockie Got Framed

The sophomore gelded pacer will be one of the favorites to win his $270,000 Indiana Sires Stakes Super Final tonight at Harrah’s Hoosier Park, part of 12 championship races featuring total purses exceeding $2.4 million.

One year ago, Rockie Got Framed failed to accumulate the points necessary to guarantee a spot behind the gate in the $220,000 Indiana Sires Stakes Super Final for freshman pacing colts. Tonight, the Jamie Macomber-trained sophomore enters the $270,000 finale as one of a few favored to win it all. The journey from a winless 2018 campaign to the highly successful 2019 schedule required a lot of patience and education, and it could all pay off in a big way this evening and the weeks that follow.

“For some reason, last year as a 2-year-old he decided that he didn’t want to follow horses. There was a switch that went off, because he trained down perfectly,” Macomber recalled of her pupil. “He became unmanageable in a hole; he was really hard to race. We felt that if we showed him any daylight at all we were going to ruin him.”

A $50,000 Harrisburg purchase, the Rockin Image—Carousel Frame gelding made 10 starts as a freshman for owners Rocco Ruffolo and Eleven Star Stables. Although ‘Rockie’ found his speed early, he struggled to convert it into wins. Instead, he would quickly get hot in a hole and try to run over the horse in front of him. During the course of the season, the pacer managed a runner-up performance and two third-place finishes, but the rest of the time, he finished off the board. Macomber could have become discouraged over the plight of her young pacer. Instead, however, she went to work over the winter to address the issue.

“It just took all winter getting him to calm down around other horses and keeping him patient. He knows that he is fast, and he knew last year that he was fast, but he thinks he can carry it for a long, long time. We just had to tell him, ‘Hey, you only have a good quarter of a mile. Let’s save it,’” said Macomber. “I spent all winter down in Pompano following horses the right way. Every time I trained him, I locked him in and made him comfortable going really slow miles in uncomfortable situations. I let him sit for miles and miles outside of horses and let him just relax sitting out there. I was just teaching him a lot of patience.”

The conditioner noted that the hardest part of executing the plan was finding horses with which to work. Training twice a week at Pompano, she needed the right conditions for her gelding, situations that did not include sending Rockie Got Framed to the lead and cutting the mile.

“They expect you to cut it every once in a while, and I never wanted to be on the front with this colt, not until late in the winter before qualifying,” she said. “For months I just said, ‘I need to follow,’ or ‘Could I please train with you today and sit outside of you the whole mile?’ People look at you like you are nuts and they want to have a nice horse, too. Luckily, we had some horses in our barn that we could use, and a few times we would get four or five horses together.”

After a winter of educating Rockie Got Framed, the Macomber Stable shipped north to Hoosier Park with the hope that the now sophomore would make the grade when returning to competition. He showed promise in winning two qualifiers, but finished fourth in his debut. Driven by Macomber’s husband, Ricky, the 3-year-old paced in 1:53.4 with a :26.3 last quarter. The gelding recorded his first seasonal win in his third start, pacing to victory in 1:52.4.

“Last year, he always showed signs of speed. The problem was that all winter I could have taught and taught and it still never worked. He could have gotten into a race behind the gate and done the same thing he did last year,” Jamie said. “It was disappointing that he didn’t just run off and win the non-winners of one in his first start. You’re like, ‘Maybe he’s not the colt that I thought.’ But, it did take some time.”

Time has shown that Rockie has rounded into one of the better horses in the division. After earning that first win, the pacer would hit the board in six of his next seven starts, recording two more wins. The Hanover Shoe Farms product raced fourth in the opening leg of Indiana Sires Stakes competition before improving to third in the next round. Rockie Got Framed then reeled off five wins in the next six attempts, four of which came in sires stakes action. The last two triumphs in the streak produced dual 1:49.3 miles to establish and equal lifetime best performances. Macomber entered her charge in the $170,000 Jenna’s Beach Boy on Sept. 20, and the pacer turned in a 1:49.2 effort, finishing third.

Versatility could prove key tonight when battling a field that includes Tellmeaboutit, a 1:48.4 winner two starts back, and the Melissa Essig-trained duo of Little Rocket Man and Shamwow. Rockie Got Framed enters the final with eight wins in 19 starts, finishing on the board 16 times. He has earned $189,580. Macomber also sends out Ollie’s Z Tam in the sophomore pacing colt final.

“It’s crazy, because there are really four top colts in our division that could win (tonight). Alvin Miller’s colt could show up with his (1):48 mile again. Jody and Missy’s colts have been tough all summer,” said Macomber. “We’ve got the eight hole. You don’t want to use that as an excuse, but wouldn’t you love to draw inside a little bit? Yeah. We’re just going to hope that somebody wants some cover and will let us in hopefully.”

Joining Rockie Got Framed and Ollie’s Z Tam, the Macomber Stable will send out three other starters in tonight’s lucrative finals. Win or lose, should Rockie come out of Friday’s race healthy, there is a good chance he will ship to Woodbine and take his shot in the Breeders Crown. Macomber sent out then-sophomore Beckhams Z Tam to a Breeders Crown victory at Hoosier Park in 2017. That year, a Super Final victory eluded their grasp when the colt finished second. Perhaps tonight a victory will propel them north of the border and onto one of the sport’s biggest stages.

“I love the way that he has worked himself into being a good horse,” she said. “He had just as much patience for me as I did for him.”

Harrah’s Hoosier Park’s championship card will feature 14 races with purses exceeding $2.4 million. Post time is 6:30 p.m., with the first of 12 championship races kicking off in the night’s second contest.