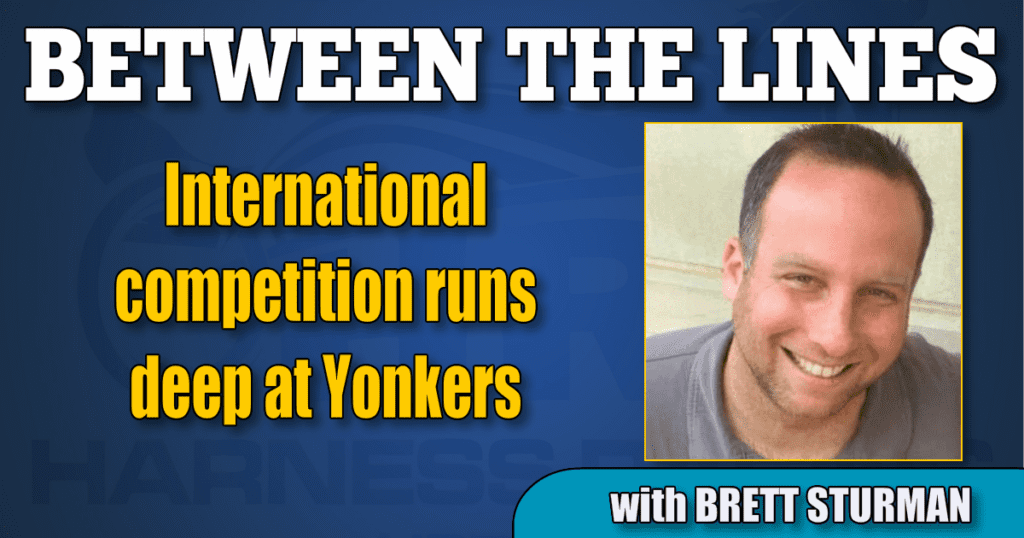 Since its return four years ago, the Yonkers International Trot has become one of my favorite races of the year. It’s one of the few harness races where the excitement of the race continuously lives up to the buildup for it. With 10 of the world’s best trotters going a mile and a quarter distance, it presents a unique race dynamic and it’s hard to split the contenders in this year’s highly-competitive field.

Because of her talent, but also in part due to a greater sense of familiarity, Atlanta is going to wind up as the race favorite. One wild card though with last year’s Hambletonian winner is that the International will be the first time she’s ever raced on a half-mile track. But even with that unknown, co-owner Howard Taylor says that she takes the turns better than any trotter he’s ever owned, and he’s cautiously optimistic as the 4-year-old makes her first start in over a month. “The time off was really just to keep her fresh. That was the plan, to point to and try to win this race,” said Taylor.

Asked about the condition of Atlanta following an uncharacteristically poor performance in the Joie De Vie at Tioga in August, Taylor revealed noteworthy information. “She almost died, she was in bad shape,” he said. “At Tioga, she had severe dehydration and had to go to the hospital. She was in real bad shape and then was off for a couple weeks. But then she recovered, and that’s when she was a very good second at Woodbine in her Maple Leaf Trot elimination considering she hadn’t done much leading up to that.” Since then, Atlanta has seemed back to her old self with a driver in Gingras who’s knowledgeable to many of these other horses, he’s likely to have Atlanta forwardly placed and well positioned. If she wins, Atlanta would be the first mare since the great Peace Corps to win this race.

After surprising in the International last year at 30-1 odds, defending champ Cruzado Dela Noche might offer odds around that high again. In retrospect, last year’s win shouldn’t have come as that much of a surprise considering that the horse had raced in stakes competition here in the U.S. early in his career, though I don’t think many people realized this time last year how formidable of a trainer Marcus Melander was going to be. This year, Cruzado Dela Noche hasn’t often threatened against this group and would be a surprise once again, even with another perfect second over trip.

A horse that I find intriguing is Bahia Quesnot. He’s somehow 1 for 16 on the year and just 2 for 28 over the past two years, but he was gaining on Propulsion last out in a Group 2 race in France. He should be well positioned form post 2 and would think that he’ll drift up from a 5-1 morning line that seems low.

The unknown in here is Zacon Gio who hasn’t lost in nearly a full year, with his last loss coming Oct. 25 of a year ago. Since then, he’s won 11 in a row. The knock is that he’s never raced outside of Italy, so it’s tough to gauge if he’s up for the challenge of now going against the world’s best trotters. Twister Bi did win this race representing Italy two years ago, but he was far more proven than this one is.

Last year’s runner-up, Lionel, is back again after missing by the narrowest of margins in 2018. He looked home free into the stretch that race after overcoming a tough trip, but may have an even tougher go of it this time around from the outside post 8 in a 10 horse field with two trailers.

Guardian Angel As is obviously capable, but the Maple Leaf Trot winner was off his game in his last pair, losing twice as the beaten favorite. In this race, his post 9 will trail the horse from post 1, so he’ll be somewhat at the mercy of others and it didn’t work out the last two times he couldn’t establish a forward position near the middle point of the race. The horse starting from post 1 is Slide So Easy. He was a longshot in this race last year and raced like it, but looks to enter in better form this time around. Having only missed being first or second in a single start this year, he was second last out to Pastore Bob – the favorite in this race last year but one who was the victim of a break into the first turn.

In the $250,000 Harry Harvey Invitational – also 10 horses at a mile and a quarter – Mission Accepted has been having a consistently good 4-year-old season for Ron Burke and owns a 1:50.2 mark from earlier this year at the Meadowlands. He recently was third to Six Pack in a 1:49.2 mile and prior to that was caught in Manchego’s monster mile at Dayton and she came back to win next out. Rich And Miserable has to deal with an outside post, but he overcame it last time and beat a couple good ones two back at Pocono. He was actually favored against Mission Accepted a few back but made a break that race. Will Take Charge is always around and will be well positioned once again from his post 4 starting slot. Custom Cantab seems like an underlay as the morning line favorite; likely would play against at that short a price.

The Dan Rooney going for another $250,000 is the big race on the day for pacers. Resembling a more traditional race of just eight horses going a normal mile, McWicked is coming off a 1:47.2 score a week ago at the Red Mile. He hasn’t been as consistent as we’ve seen him in years past, but when he’s on he can still be exceptional. Jimmy Freight exits a solid win off cover to pull the 10-1 upset and it would be tough to not see him getting a share starting from the rail. This Is The Plan will try to take an early shot from post 7 and American History would likely need to sweep them all from the outside, it could happen.

Picks: McWicked, This Is The Plan, Jimmy Freight