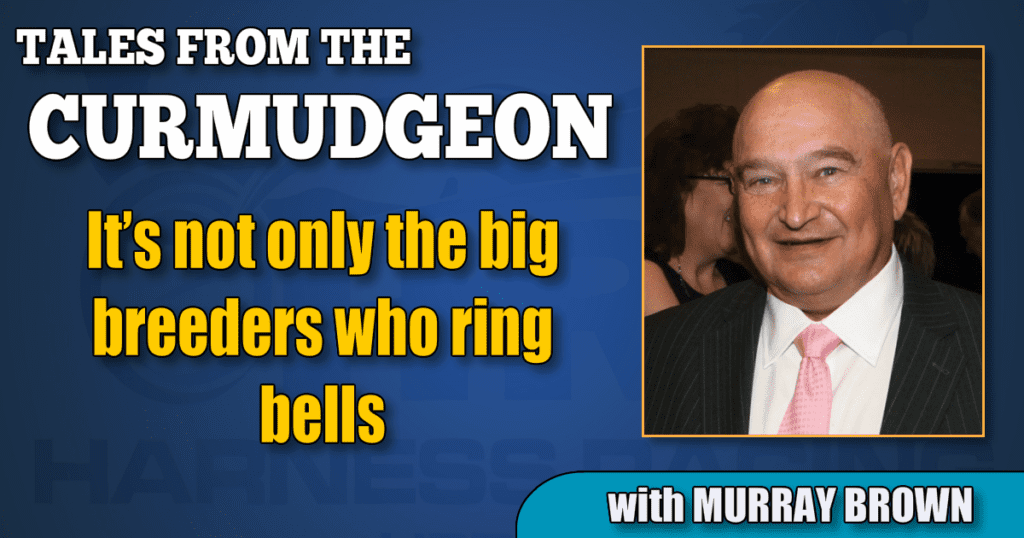 It’s not only the big breeders who ring bells

Proof that you do not have to be a big breeder to sell high priced yearlings was very much in evidence in Lexington.

The name of the game is quality, not quantity. That is and will always be the case.

The three highest-priced yearlings sold in Kentucky were sold by breeders whose emphasis is on the former and not the latter.

Hip No 44 — Maverick became the first million-dollar yearling and the highest priced yearling ever sold bringing $1.1 million for a group of Tony Alagna’s owners led by all around good guy Brad Grant.

The colt was sold by the Katz-Libfield partnership who aren’t big on numbers but very high on quality. The same connections also sold Hip No.65 Really Fast to clients of Nancy Johansson for $700,000.

Hip No. 114 — Some Terror, became the highest priced pacing yearling ever sold, bringing $800,000, with Nancy Johansson signing the ticket. The colt was owned by Ed Gold, Howard Taylor and Chuck Pompey.

I would be remiss in not mentioning Harry Rutherford selling the highest priced yearling in Thursday’s session, Hip No 432 Up and Ready to the Libfeld-Katz partnership. Harry and Joey (Diane Ingham) are two of the nicest people in the game.

Best wishes to all the successful buyers and to all of the bidders and consignors who made this sale the most successful in the history of our sport.

People who buy horses are certainly entitled to their own opinions. After all, they are spending their own money and they should buy what pleases them.

However I’ve found that there is, in my opinion, far too much prejudice against a yearling who may be on the small side.

Providing they check all, or most, of the important boxes, I believe that there can tremendous value to be found in buying medium to smallish sized horses that buyers with big bankrolls do not pay much attention to.

There are some buyers who won’t even look at a yearling that is not large.

If so, they would have missed the boat on horses such as Western Hanover, Albatross, Bettors Delight, Ayres, He’s Watching, Gimpanzee, Bettors Wish and numerous others.

Incidentally, I wouldn’t describe the dams of both Lyons Sentinel (Tutu Hanover) and Papi Rob Hanover (Panera Hanover) as being runts, but they are both somewhat south of medium sized.

I am very excited by the prospect of the WEG million-dollar race for 2-year-old trotters that organizers are hoping to hold at Mohawk next year (full story here).

People have been speculating as to whether it will fill.

Based on the amount of money being spent on trotters just in Lexington, I find it hard to imagine that it will not.

Just off the top of my head I can come up with half a dozen just from Lexington’s opening day who will almost certainly buy a spot, maybe two.

There is still the rest of the sale and of course a strong Harrisburg catalog coming up.

My guess is that they will likely be oversubscribed for the nine slots, with the remaining position to be won free by the winner of the Wellwood Memorial.

The beauty of this innovative move by WEG management is not only the opportunity to race for a million dollars, but perhaps more importantly, the added opportunity for 2-year-old trotters to race for significant stakes money in Ontario over a several week period before the race without having to ship anywhere else to do so.

As are most innovative moves in this business, this initiative has been met with some opposition from the knockers’ bench.

If ever there was a win-win situation, this is, or is very close to it. Not one penny will come out of the horsemen’s purse account. We will have one of the sport’s greatest events at its most innovative venue. I have no doubt that the race will be promoted vigorously.

What is there to lose?

The only ones with a chance to lose some money will be the ones who buy the slots.

But, they are all big boys and girls and certainly know the monetary risks associated with racing horses.

If they don’t, then perhaps they shouldn’t be in the business.

It was great to see trainer Noel Daley back in the US of A.

He told me that his Australian venture was excellent, but was too slow moving for someone who was used to excitement of racing here in North America.

He is in the midst of reestablishing a public stable here.

I remarked that he was following in the footsteps of his former boss Brett Pelling who after taking a hiatus from North American racing decided to return to the States and do what he does best.

Noel said that it took Brett 10 years to make that decision. His was much quicker.

Speaking of Brett Pelling. I had occasion to speak with him and congratulate him on the success of Papi Rob Hanover who was one of my favorite yearlings at Hanover last year.

I have never heard him speak so well of a horse — any horse.

He said that of all the great horses he has trained, there is only one other that he thought so much of.

I didn’t ask him who that other horse was and Brett didn’t volunteer. If I were guessing, I would say that it was likely either Rocknroll Hanover or The Panderosa.

He went on to say that his game plan from the very beginning was to bring Papi Rob along slowly, aiming primarily for the classics races next year at three.

He is already a very good 2-year-old, but he believes he has a very good chance of developing into a truly great 3-year-old.