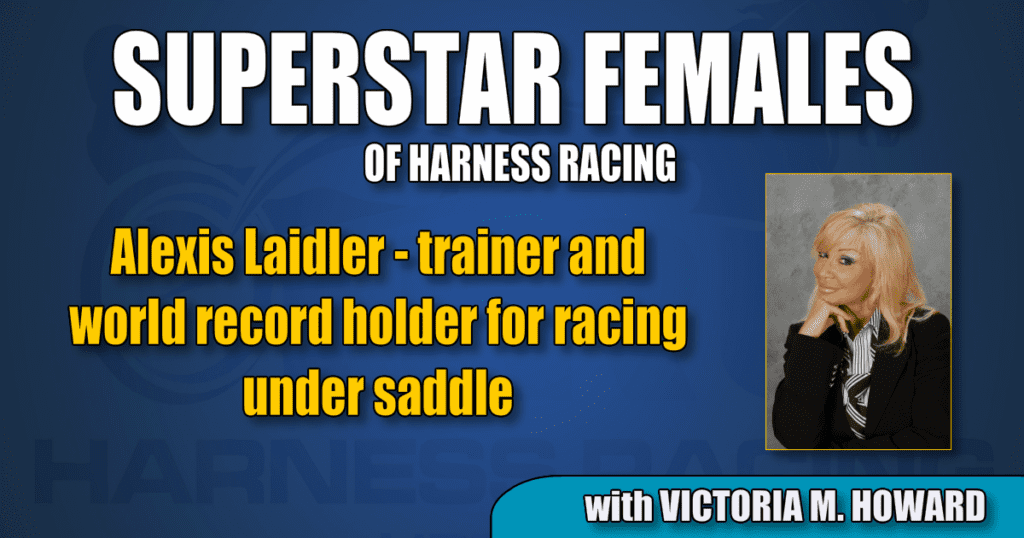 Laidler is not only talented, but beautiful, as well. A photo she sent me reminded me of the famous ’60s English model and icon Jean Shrimpton. Long hair accentuated her tall, slender figure. In the photo, Laidler is wearing a short mini dress and white go-go boots. She definitely looked like a supermodel of the ’60s or ’70s era.

How did Alexis get started in harness racing? In earlier days, harness racing was known as a man’s sport and the majority of horse trainers were men. Today, thankfully it is not that way.

Born in County Durham, England, Alexis and her husband, Rocker, (Yes, that’s his real name) who just happens to be the leading driver 11 out of the past 12 years, together train a stable of 25 to 35 horses on their farm track.

“Rocker started out training with his father, but when we got together we began working as a team and have been doing so for 15 years,” said Alexis.

And what a power team they are. For the past dozen years Alexis and Rocker have swept all awards for BHRC trainer and driver.

“I began training standardbreds about 25 years ago. Although I have driven in races, I usually leave it up to Rocker to drive. He is a very good driver and has won all major stakes and handicapped finals in our country.”

Although Alexis has never driven or trained in the USA, the Laidlers have visited U.S. tracks to watch the races. I asked if she thought racing in the U.S. was different than in the UK, and if so, how?

“It’s very different. Tracks are a lot smaller in the UK and we race on turf here. Also, our races are longer distance. We jog our horses every day between six and seven miles and train them over long distances to prepare them for turf racing,” Alexis said.

“Unfortunately, harness racing is not that popular in the UK and is only followed by those who are involved in the sport. Thoroughbred racing on the other hand is very popular. In October, we exported one of our horses, Evanwoodsonofagun, to Canada to race. I am planning to go there and train him for two months and then he will be under the care of our friends, Colin and Debbie Johnson when Rocker returns to England. We recently exported a horse named Matticulous to the States to be trained by top trainer Ron Burke.

“Evenswoodsonofagun is my all-time favorite horse. He has won all the major races in our country.”

No matter what language you speak and whether you live in the UK, the United States, Finland, or Sweden, a horse lover is a very special human being.