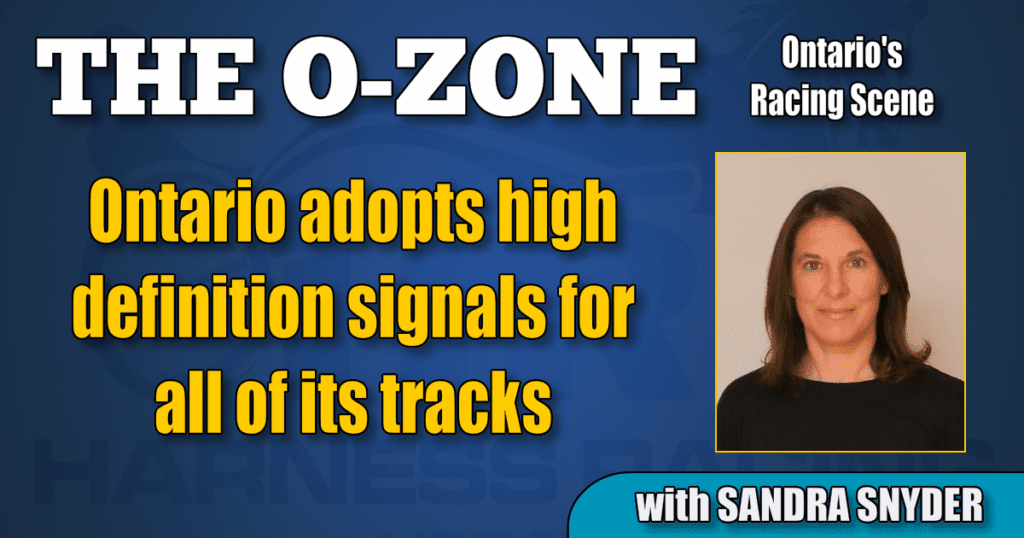 Ontario adopts high definition signals for all of its tracks

All but three of the province’s tracks are now broadcasting in high definition, with Hiawatha, Kawartha and Leamington expected to be sending out an HD signal sometime next year.

If you are a fan of Ontario racing you have noticed that live broadcasts and replays from most of the province’s racetracks have improved by leaps and bounds this season thanks the adoption of high definition (HD) signals.

The broadcasting improvements were sparked by both a 2016 directive from the Ontario Racing Commission, the industry regulator at that point in time, regarding race patrol and photo finish requirements and a push by Ontario Racing to give customers a consistent, quality broadcast product.

“The AGCO (Alcohol and Gaming Commission of Ontario) wanted to improve their patrol in HD (High Definition) so they mandated to the tracks, ‘We need HD coverage,’” said John Siscos, Ontario Racing’s director of communications, stakeholder engagement and marketing. “It was discussed with the OLG (Ontario Lottery and Gaming) that capital expenditures that would relate to HD could go in the Long-Term Funding Agreement, so we decided everybody has to be HD compliant and put it through on the capital expenditure ask.”

Once the Long-Term Funding Agreement was in place in 2018, each racetrack that signed onto the agreement was encouraged to put a business plan together to meet the HD requirements set out in the original 2016 directive. (full directive here). Each racetrack defined their own unique needs beyond the directive’s requirements and contracted with a provider to install and enable the equipment this spring. All of the original signatories to the Long-Term Funding Agreement are now broadcasting in HD and the tracks that signed on in 2019 — Hiawatha, Kawartha and Leamington — should have it in place for next year.

“I think everybody else used ONTrack, except for our four tracks (Grand River Raceway, Flamboro Downs, Georgian Downs, The Raceway at the Western Fair District), we went with Woodbine,” said Grand River Raceway’s director of operations Jamie Martin.

“We completely replaced our control rooms at all four tracks and Woodbine identified the equipment that we needed, and of course Ontario Racing provided support for all racetracks to upgrade to HD. In our case, we share the equipment with Western Fair and so it was installed here back in May and went well and very soon it will leave for Western Fair.”

Martin noted that the equipment was a much-needed upgrade, in most cases replacing two decade old analog systems, but one that would not likely have been on racetracks’ 2019 ‘To Do’ lists without the leadership from Ontario Racing and the funds from the capital improvement program.

“This is something that was well overdue,” said Siscos. “We had to get this kind of coverage — better chronicling of the races — for the fan, for the racing customer, for the handicapper, for the betting customer. You’ve seen, and the fans have seen, that something in SD (standard definition) just doesn’t cut it any more. So we’ve embarked on trying to do something with the HD and I suspect that concept of promoting and offering Ontario racing signals in HD will just expand and we’ll do lots with it.”

At present, customers at the racetracks are enjoying the full HD broadcast, while those watching remotely are seeing an SD signal vastly improved by the new equipment. The dissemination of HD broadcasts from most racetracks is currently limited by the capacity of Roberts Communication Network to transmit HD signals on the racing video network. Martin said the cost of transmitting the signal in HD is approximately three times that of SD.

“Every racetrack in North America deals with Roberts, out of Las Vegas,” said Martin. “There’s some that don’t and Clinton and Hanover would be two, because they don’t uplink their signal. They’re streaming their signal through a different provider; they’re not part of the encrypted racing video network. And if you watched say Clinton, they’re streaming in HD so it actually looks fantastic, their video stream.”

Clinton Raceway’s Ian Fleming said the combination of the HD signal and additional distribution across Canada and the United States made it possible for the half-mile oval to attract new customers to its Sunday afternoon programs and provided a significant boost to wagering.

“We went from having a pretty blurry picture to a very clear one and we noticed our on-track was up, but where we really noticed gains this year was on our off-track signal. Lots of days we bet $12,000 or $13,000 in the U.S. on the races in Clinton, which would have been unheard of in other years,” said Fleming. “And Sunday afternoon if you like Ontario harness there would be just us and Dresden, or us and Leamington, and a couple of the Sundays we were on our own.

“We got a lot of great feedback on the quality of the picture. The team from ONTrack did a great job, we got some graphics on there and it was a good picture, and people kind of got in the habit of turning it on and betting a few dollars on it. And what that does, the reason our on-track was up is because the on-track customers see that the pools are better and I think that encourages them to bet a little more. It’s kind of a snowball that we hope we can kind of continue on with next year.”

Martin also attributes a strong summer of wagering, at least in part, to the improved broadcast and expects the day will come when customers of racetracks across North America are able to access a full HD broadcast no matter where they choose to watch.

“I think having a better quality video stream is ultimately where we want to be, because more and more people are consuming us through their phones or their computers,” said Martin. “I know the Jockey Club in the U.S. are offering an incentive program for U.S. thoroughbred tracks to upgrade to HD and they’re providing funding to help them do that. So this was a great first step for us to get all the tracks in the province producing an HD quality signal, so the next step is to get it out there. So we have to work on that, and we will.”

While Martin cautions that the shift to full HD broadcasts will be several years in the future, he is confident that Ontario racetracks will continue to work on providing on and off-track customers with new and improved visuals.

In that vein, The Raceway at the Western Fair District team spent some time this summer focussed on their HD upgrade and will unveil a new studio and race day show to customers when their fall meet kicks off on Friday, Oct. 4.

“I would say definitely the HD sparked the interest in us upgrading our studio and making it more appealing to customers,” said raceway manager Greg Gangle. “We’ve spent a lot of time this season focusing on the HD upgrade. Our graphics package and graphic boards are eye catching and we’re focusing a lot of attention on the content we provide. We will be implementing a few new ideas that should be well received.”

While the ideal of full HD broadcasts across all platforms is in the future, Siscos said he is confident that fans will see another step forward in terms of content and distribution next year now that racetracks have had a full season to work with the new equipment.

“I think a really big year for this program is going to be 2020,” said Siscos. “The fact is we want to get this product, the Ontario Racing product — which we’re proud of, which the province is proud of, which the industry is proud of — out to as big a distribution as possible. The key is capitalizing on it and making sure it’s customer facing, and I think we’ve done that and I think it’s just the beginning.”