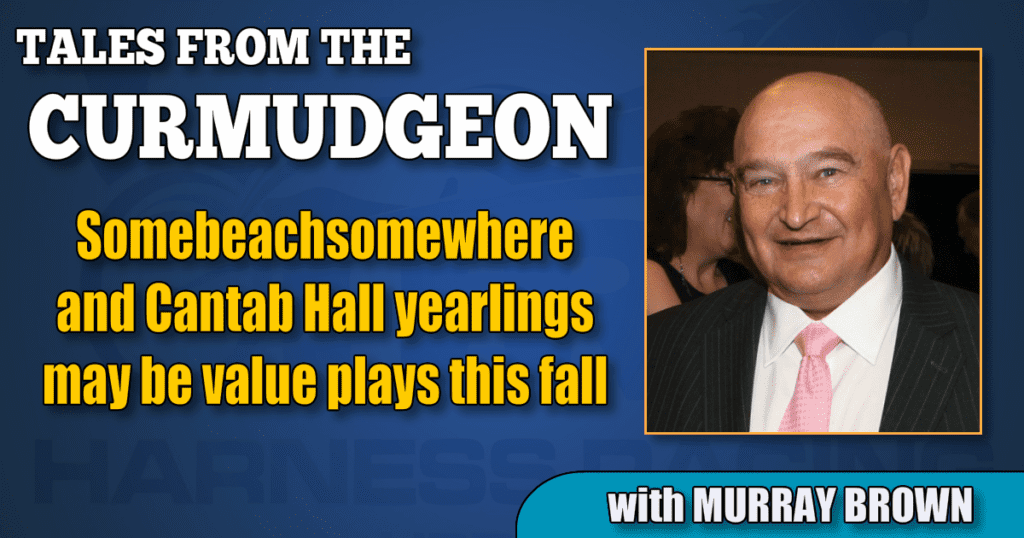 Somebeachsomewhere and Cantab Hall yearlings may be value plays this fall

Here’s why you may be able to get great value from these great stallions at the yearling sales.

I’m about to say something that might be viewed as crazy. I think it’s likely that the greatest values at the upcoming yearling sales will be found in the pacing yearlings by Somebeachsomewhere and the trotting yearlings by Cantab Hall.

Both horses have proven themselves to be great sires.

Each has sired numerous champions, both colts and fillies.

Both at this point, both appear to have been challenged, and perhaps, eclipsed, by their greatest sons Captaintreacherous (Beach) and Father Patrick (Cantab Hall).

This crop of yearlings represents his last full one. As usual, they are mostly out of quality mares.

He is every bit the great sire that he has always been.

There is no reason why this crop cannot include another Captaintreacherous, although that is highly unlikely. That type of horse comes along very seldom, both on the racetrack and especially in the breeding shed. But as the man from the lottery says, “Ya never know.”

Captaintreacherous’ offspring are dominating on the racetrack in such a fashion I would say has not been seen since Adios’ era.

That will likely be the main reason why, in relative terms, the Somebeachsomewheres will — in my less than humble opinion — represent great value in the sales rings.

Unless the odd Captaintreacherous offspring is missing a leg, the vast majority of them will sell through the roof. But there are other reasons, several of them.

Bettors Delight is enjoying likely the best year of his fabulous stud career.

In addition, we have two exceptionally gifted young stallions, Always B Miki and Betting Line, who will be represented by their first crop of yearlings.

Both horses were fantastic on the racetrack.

They were each bred to a large number of quality mares.

Given the appetite for something new, especially those sired by quality first year horses, I think they will be very much in demand.

The size of the pie at the top of the market contains only so many pieces.

There are a limited number of dollars in play.

What goes to the offspring of one sire will likely be deducted from one of its competitors.

The same thing to a lesser degree applies to Cantab Hall.

He is perceived by many to be having an off year with his 2-year-olds.

But there is a reason for this, a very good reason.

His 2-year-olds of 2019 were conceived when he was virtually out of commission in the breeding shed.

He had a few foals conceived early in the season before his ataxia became too dangerous.

There were also some which were conceived through the use of frozen semen.

But his overall numbers were down, way down. The quality of the mares who had foals by him were generally the same.

Again, he is a stallion who has proven time and time again that he is capable of producing great trotters.

He is also a victim of the flavor of the month syndrome that is so prevalent in our industry.

There is no doubt that his competition consisting of Muscle Hill, Chapter Seven and his son Father Patrick will be very stiff in the sales ring. Add to this, two excellent sons by Muscle Hill, Southwind Frank and Bar Hopping and the competition for the limited dollars promises to be very strong.

In Pennsylvania, where Cantab Hall stands, his competition has been significantly reduced by the return of Muscle Hill to New Jersey.

That leaves Father Patrick as his major proven competition in Pennsylvania.

That is a daunting challenge, but not an insurmountable one for a stallion who has shown time and time again that he is competitive with the world and is able to take on all and sundry.

The argument could be made that you aren’t buying a top yearling to compete in regional events.

But in this case, you are not — at least not only in sires stakes events. That is a pretty good insurance policy, though.

When betting on horses or buying them, the wise man looks for value. Value can be the name of the game in both areas.
Like my dear friend Bill Wellwood was fond of saying “When everybody else is zigging, I like to zag.”

In last week’s column (full column here) I mentioned that I had never before, nor since, seen a horseman drape himself over the rear end of a horse as Soren Nordin did. I had no idea what his purpose was in doing so.

I received the following post from a Orjan Torstensson which explains it: “Soren leaned over the rear of horses to palpate their stifles. That is the only way you can compare the stifles to each other at the same time.”

PET PEEVE OF THE WEEK

The yearling should, in my opinion, be judged on its attributes, not because the dam has had more than three previous foals.

I’ve found that more and more buyers simply refuse to even look at one because it falls in that category.

In the case of ET foals, the fact that it is an ET might actually be a benefit. If the foal was raised by a young vibrant mare rather than a possibly older, less ambitious one, it can be a bonus.

On the subject of ET foals, it surprises me that so few yearling buyers ask about the age and physical well-being of the mare that conceived and raised the foal.