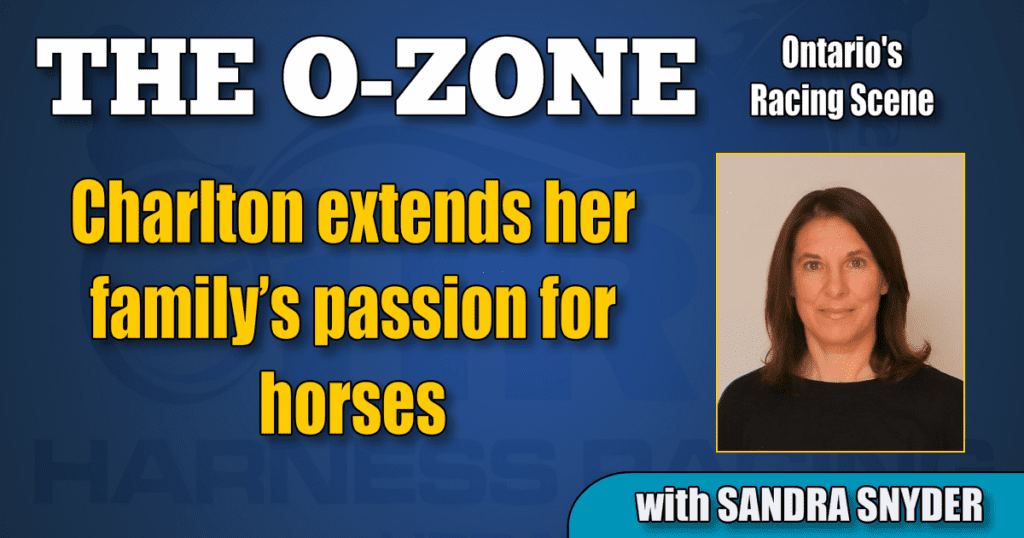 Sally Charlton’s father owned horses with Jack and then Bob McIntosh. Now her retirement project has led her to become one of the leading owners at Hiawatha Horse Park.

A passion for harness racing runs deep in Sally Charlton’s genes. Her father, John Baeker, owned horses with first Jack and then Bob McIntosh from the 1950s through the 1980s and she has fond memories of visiting the barn as a child.

As an adult, Charlton followed her father’s footsteps into a career as a pharmacist and four years ago she followed his lead into standardbred ownership, purchasing pacing mare Got Some Spark from her father’s former partner.

“When I was a kid my dad always owned a horse. He was a pharmacist and sometimes he would take me to the barn on Saturday and that was always kind of fun. The years go by and I was out watching an RCMP musical ride one time and… crying behind my sunglasses,” said Charlton. “So then the next thing I did was I learned to ride a horse, probably about seven years ago. And then they started racing in Leamington again in the summers, and I would go watch. And then I decided — sitting there in the stands going — that this is not enough. I needed to know what my dad experienced owning a horse, so that’s when I connected with Lindsey Kerr and bought my first horse.

“I bought it from Bob McIntosh and when Bob was young, starting out, my dad was one of his business partners,” she said. “So my first horse was Got Some Spark and she’s my favourite of course, because she’s my first one.”

Although McIntosh did not know Charlton while he was training horses for her father, he was pleased to learn that she was interested in getting into the business.

“I was happy to see that, because her dad always enjoyed the horses. When I was just getting started in the late 1970s claiming horses, him and my cousin Al were my first owners. They started off right at the beginning, when nobody knew who I was,” said the Hall of Fame horseman. “We started off with just $5,000 claimers split up three ways, but we did very well in the claiming game back in the day and turned a lot of profits on a lot of claiming horses. I always remember him as a great guy. He was a very kind man and a real gentleman and just loved the business.

“There’s a lot of history going way back that’s for sure. They had a good horse together, Johnny and my dad, called The Monarch C. That was back in the 1950s, and he was like a B1 pacer back in those days and racing in Montreal. My dad trained him in the wintertime and then he sent him to Del McTavish Sr. in the summertime. So back then when a 2:05 pacer was something else, he was a 2:05 pacer. Back in the late 1950s that was quite a thing. They had a lot of fun together my dad and Johnny.”

To date, Charlton has also emulated her father by owning claiming and conditioned horses, but she does not rule out getting involved with yearlings or possibly breeding her own young stock in the future. She currently owns 7-year-old mare Got Some Spark (Camluck–Energy Efficient), 5-year-old mare White Dancer (Big Jim–Dancing Inthe Park), 3-year-old pacing colt Sports Jacket (Sportswriter–Greenwich Girl) and 6-year-old gelding Mr Mach Jimmy (Mach Three–Rosebud Stena). She also shares ownership of 10-year-old gelding Bet On Art (Royal Art–U Betican B B) with Ashley and Lindsey Kerr and 7-year-old gelding Arazi (Rocknroll Hanover–Bikini Line) with Lindsey Kerr.

“Mr Mach Jimmy has had a few wins this summer and Sports Jacket, the 3-year-old, he’s been doing well. We’ve just had him for a short time,” said Charlton. “Bet On Art, he always comes through with a check.”

Charlton ranks second in the Hiawatha Horse Park owner standings thanks to the efforts of White Dancer, Sports Jacket and Mr Mach Jimmy and she and the Kerr sisters sit seventh in the rankings thanks to Bet On Art, who has posted six wins in 14 starts over the Sarnia, ON oval.

Now retired, the Tecumseh, ON resident gets out to the barn several times a week and likes to help out in the paddock on race nights, an arrangement she much prefers over the situation she found herself in for Got Some Sparks’ first start on Sept. 15, 2015.

“Sadly, I was stuck at work, watching it on my tablet. I think that’s when thoughts of retirement started entering my head,” she said with a laugh. “Being around horses lifts one’s spirits and you feel happier. I feel really fortunate that I made the leap of faith into the horse business.”

This Saturday, Sept. 14 Got Some Spark returns to the Hiawatha conditioned ranks after a five month lay-off and Arazi makes his debut for Charlton and Kerr in a $7,000 claimer. Tonight (Sept. 13), Sports Jacket will compete in a conditioned event at Grand River Raceway.

Charlton notes that the stable concentrates on Hiawatha in the summer because the five-eighths mile oval is an easy commute from Kerr’s Essex County base. After Hiawatha’s meet wraps up on Sept. 21, the horses will spend a few weeks rolling down the highway until The Raceway at the Western Fair District kicks off its winter meet on Oct. 4.

“I think this week we’re going to be going to Grand River and Flamboro as well, but it’s a quite a drive,” said Charlton. “It’s a commitment.”

Whether she makes the trip with her horses on race night or opts to watch them from home, Charlton has no plans to reduce her involvement in the foreseeable future. She is thoroughly enjoying the experience of ownership, extending her father’s legacy into its second generation.