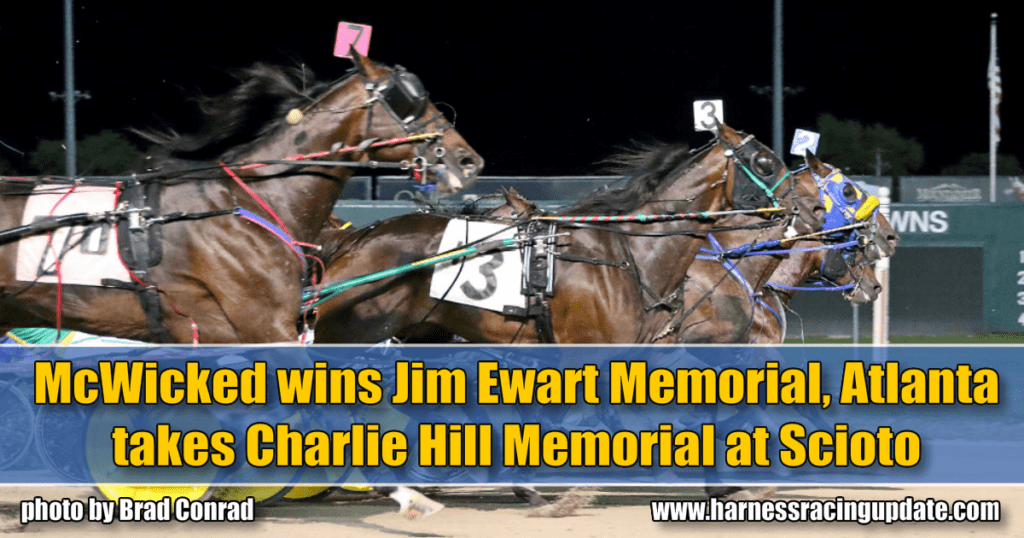 With 2018 Charlie Hill Memorial champion Homicide Hunter absent from this year’s edition, the title was up for grabs.

The front-end speedsters did not have things their way, although #5 Mission Accepted (Chris Page) did make the attempt. He led to the :27.1 opening quarter, with Plunge Blue Chip (Ake Svanstedt) following in second. Atlanta (Yannick Gingras), who was fifth away at the start, kept advancing on the outside, installing herself as new leader at the :56 half. That relaxed :29.4 split allowed Atlanta to fend off a first-over Guardian Angel AS (Tim Tetrick) at the 1:24 flat three-quarters. She maintained a two-and-a-half length advantage over Mission Accepted as Guardian Angel AS could not clear. Turning for home, Gingras’ mare rebuffed passing lane bids by Plunge Blue Chip (second in win photo) and Mission Accepted (third).

Atlanta (Chapter Seven—Hemi Blue Chip, by Cantab Hall) is owned by Crawford Farms Racing of Syracuse, NY; Brad Grant of Milton, ON; and Howard Taylor of Philadelphia, PA. The Ron Burke trainee and 2018 Dan Patch Trotter of the Year was supplemented to the Hill Memorial for $10,000. The win was the 19th of her career.

In the winner’s circle, Yannick Gingras said, “the sky’s the limit” for the still-improving trotter. The particular trip was nonetheless a nail-biter: “Honestly, I was kind of measuring a little bit, late Ake was coming pretty fast. (Atlanta is) a way better mare, I think, following horses.”

Gingras indicated that trainer Burke called him after the Maple Leaf Trot, wanting to find “a couple of starts before the Yonkers [International] Trot” for Atlanta. Entering the mare in Scioto Downs’ closing-night feature trot made perfect sense.

Charles Hill founded Scioto Downs in 1959, and served as its president and chairman of the board. The benevolent owner/breeder also founded Hill Farm (1953). He was inducted to the Goshen Hall of Fame in 1980.

The field for the $440,000 Jim Ewart Memorial Pace was reduced to nine horses after world champion Lather Up was scratched sick. With the 9-5 morning line favorite gone from the lineup (and 2018 Ewart winner Split the House sitting out the 2019 edition), race 14 presented a seemingly less-lopsided group, led by #2 McWicked. The 2017 Ewart Memorial champion and 2018 Dan Patch Horse of the Year captured Tioga Downs’ Roll With Joe on Aug. 18. Also generating interest were #7 Courtly Choice, longshot winner of the Aug. 31 Canadian Pacing Derby, and #1 Jimmy Freight, who defeated Courtly Choice in the Aug. 24 Woodbine Mohawk Park Preferred.

Longshot #6 Filibuster Hanover (Chris Page) took charge early, clearing and putting a length and a half between himself and #5 This Is The Plan (Yannick Gingras) at the punishing :25.3 first quarter. Unwilling to remain pocketed up, This Is The Plan retook the lead at the half, followed by a second-over #4 Western Fame (Dan Noble) and clocked in :52.4. Ahead by a mere head of Western Fame at the 1:20 three-quarters, Gingras’ horse was paying the price; Jimmy Freight was a well-positioned third on the outside and Flibuster Hanover still fourth in a tight pack.

Then came McWicked (Brian Sears), moving from fifth as part of a surging wall of closers. He prevailed by a nose for the 1:49 win, becoming the first horse to win two editions of the Ewart Memorial. #3 Donttellmeagain (Tim Tetrick), powered home from sixth to dead heat with a tenacious Western Fame for place in the furious finish.

The Casie Coleman-trained McWicked is an 8-year-old stallion by McArdle, out of Western Sahara (by Western Ideal). Bred by Andray Farms of Pennsylvania, the reigning Horse of the Year is owned by Ed James’S S G Stables of North Boston, New York. The performance was the star pacer’s fourth victory of 2019 and the 38th of his career.

Brian Sears said it was tougher for the older horse to regain his form with age, yet McWicked could still be counted on to dig deep. “You know, I was still asking him for pace (on the last turn), just keeping up with them,” he told the USTA’s Wendy Ross after the race. “I want to thank Ed James for bringing him back this year, and giving me the chance to drive him again. He’s a great horse.”

On the undercard, #5 Up Front Flor Ida circled four-wide on the final turn to win the $75,000 Ohio Sires Stakes Aged Mare Pace in 1:51.3f. “To be honest, her last three starts, she probably should have won all three of them,” said driver Brett Miller of his hard-luck 7-1 winner. 1-9 favorite #3 Feelin Red Hot stalled second over at the 1:22.2 three-quarters and faded to last.

Up Front Flor Ida (p, 4, 1:51.0f), a 4-year-old Woodstock—Up Front Dr J (by Dragon Again) mare, added to her previous $232,390 in career earnings. The Tim McKoy trainee was bred by Ed Mullinax of Ohio, and is owned by Kevin F. McKinney and Virginia A. McKoy, both of Springboro, Ohio.

The OHSS Aged Horse and Gelding Pace went to #4 Sectionline Bigry and driver Tyler Smith, in a new lifetime best of 1:49.2f. The 1-5 betting favorite did not disappoint, opening up by three lengths at the top of the stretch. “When I called on him, he paced right through to the wire” despite setting brisk fractions from the 54.2 half onward, said Smith. He added that the pacer is bound for the Bobby Quillen Memorial at Harrington Raceway next week.

Sectionline Bigry is co-owned by his breeder, Harold Lee Bauder of Delaware, OH, with MG Dixon and HL Bauder, OH. Prior to his Saturday night OHSS victory, the 4-year-old gelded son of Pet Rock—Aquatic Yankee (Cambest) had earned $327,527 lifetime. The win was his 11th in 18 seasonal starts.