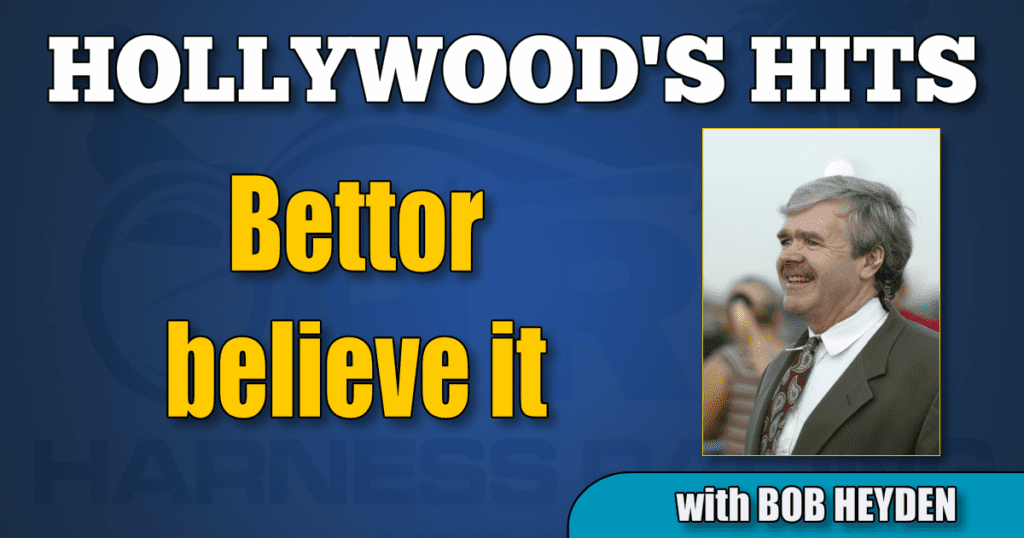 The leading money-winning horse in North America is Bettors Wish with a 12 8-4-0 $984,544 slate for 2019. It is unusual that the four SECONDS are clearly the most interesting lines on his bio:
North America Cup — second Meadowlands Pace — second Cane Pace — second Messenger — second

Seven of the nine others were done by stallions, with the lone two geldings both at 1:46.4 — Holborn Hanover and Dr J Hanover.

Nine of 10 have been done on a mile track. Dr J Hanover’s 1:46.4 was on the seven-eighths mile track at Woodbine Mohawk Park.

Five North American breds have made over $4 million on these shores only. (Leaving out a few such as Moni Maker and Mack Lobell-who enjoyed considerable success outside the U.S.)

Of the five, Brian Sears has been the regular driver on three: Mister Big, Bee A Magician and McWicked.
Gallo Blue Chip and all-time leader Foiled Again are the other two.

Jim King, Jr., the trainer of Shartin N, was the driver who finished second the last time the sport had a pacing event valued at better than $1.5 million? It came in the 1986 Woodrow Wilson when he was second with Ali Khan (from the fist crop of Genghis Khan) to Cullin Hanover in the sixth richest race ever held, ($1,561,500).

Speaking on Shartin N. Her bankroll was $826,427 entering September, meaning that she is on her way to posting yet another $1 million season, her second straight. They are (or will be) the only two million-dollar seasons by pacing mares in harness racing history.

In 2016, Downbytheseaside held on by a nose to win the Messenger and pay $2.10. This year, Bettors Wish also was sent off at 5 cents on the dollar and was second best. As far as we can tell, the last time a Triple Crown event had a loser who was sent off the minimum 5 cents and got beat was in 1998, when Muscles Yankee did the same in the Kentucky Futurity going for the Triple Crown (He made the final after finishing fifth in his heat. He was third in the final at 4-5).

Early September saw Hanover Shoe Farms at $746,435,027 in all-time breeding earnings. In the wins department, #2 Winbak Farms was closing in on a big milestone. Currently, they are less than 40 wins away from 10,000.

Ever heard of this before?

A horse makes over $2.6 million lifetime, but never wins more than four races in any one season?
That’s the story of Resolve, who made $2,621,086 lifetime.
His career record is as such:

It’s not as good as Somebeachsomewhere and Muscle Hill having the exact same career mark 20-for-21, losing once each by a neck, with both losses occurring at the Meadowlands, but it isn’t bad:

Check out the career records for Captaintreacherous and Father Patrick: