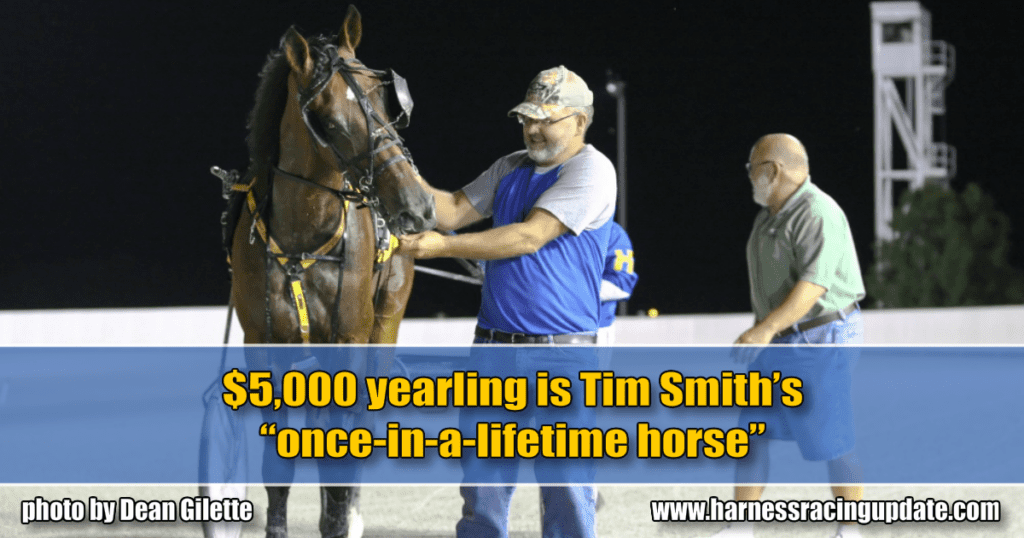 Clever Character has won four of six freshman starts and nearly $100,000 and leads his Indiana Sires Stakes division by a wide margin.

Last fall, Tim Smith invested in his retirement when he purchased pacing colt Clever Character at the Michiana Classic sale for $5,000. In less than a year, the son of Tellitlikeitis—Ruby Delight has performed better than any blue chip stock for the Spencerville, IN resident, taking him on an incredible, and improbable, ride. The gelding has won four of six freshman starts, the latest a 1:52 triumph Aug. 30 in Indiana Sires Stakes action.

“Sitting out there in January and February, you dream your colt is going to be like he turned out. It never happens, it just doesn’t happen,” said Smith, who owns and trains the near six-figure earner. “He is a once-in-a-lifetime horse. That’s all there is to it.”

Smith has grown up surrounded by harness racing. His father, Bill, earned a living racing horses, and his brother, Joel, followed suit. The 60-year-old took a slightly different path, however, pursuing the sport as a hobby. For the last 34 years, he served as an electrician, working in the maintenance department of a factory while training and racing on the side. Knowing he was set to retire in May, Smith attended the sale last November looking for a baby to develop and race. Traditionally a “trotting guy,” he bought the colt playing the odds that he had a better chance of getting the pacer to the races.

“I’ve had trotters for years; that’s all I’ve trained. I thought if the right pacer came along I would try one again,” said the trainer. “I just happened to be sitting there and he came through and I thought it was a reasonable price. It turned out to be a real reasonable price.”

Clever Character has blossomed into one of the better freshman pacing colts racing in Indiana. In six starts, he sports a 4-2-0 record with $95,375 in seasonal earnings. Previously, Smith has conditioned an Indiana Fair Circuit champion and trained a pair of trotters that each finished third in end-of-season Indiana Sires Stakes finals. Clever Character has taken the owner to previously unreached heights.

“I’ve never won a leg in sires stakes before. I’ve gotten checks in them. I never won one, now I’ve won three of them,” he said. “It’s still a dream.”

Training on the farm track his father built over five decades ago, Smith said that Clever Character had issues early, locked on the right line when circling the half-mile oval. After taking the gelding to the vet and finding nothing wrong, he eventually added a Murphy blind to the left side, and the 2-year-old responded. He remembers a particular trip with Clever Character where he realized his charge was something special.

“The farm track is nothing spectacular. It’s not flat. It’s got some ups and downs. It’s kind of rough, but we’ve trained a lot of good horses on it. Dad always said if they could get over this track, they can get over anything,” Smith said. “I put a race bike on him for the first time about three weeks before I qualified him. I went a heck of a half with him and I knew I had something then.”

Enlisting the services of Dale Hiteman, Smith dropped Clever Character into a qualifier June 12 at Harrah’s Hoosier Park. The freshman finished second that day by a neck, pacing in 1:56.3 with a last quarter in :27.1. One week later, he claimed victory in his debut, wiring the field and stopping the clock in 1:54.4. The owner knew that day he had a horse that could compete in Indiana Sires Stakes. Clever Character quickly delivered, winning his $36,000 division in the opening leg of ISS action, pacing home in :26.2 and tripping the timer in 1:52.4. The gelding notched a runner-up finish in the second leg before adding victories in the third and fourth legs. The most recent win, by a length and a half margin, is his fastest mile to date.

With Clever Character’s exploits, Smith has fielded offers on the gelding. A trainer since 1993, the veteran knows that horses of this caliber do not come around every day. He has turned down every offer, focusing less on the money and more on the thrill of campaigning this special equine.

“I’m a low-budget operation. You just don’t stumble across these kind with a low-budget operation most of the time,” he said. “It’s not that I’m rich, but I enjoy the fun more than the money. I would hate to get rid of him. If I got the money, I’d just go out and try to find something like him, which is hard to do. I know what the odds are. You’ve got to enjoy this when it comes along.”

With two rounds of Indiana Sires Stakes action remaining before the October Super Final, Clever Character leads the division. He has accumulated 179 points in four legs, 50 more than his nearest competition. Smith, with his low-budget operation and reasonably priced gelding, has taken the division by storm. Win or lose, he is enjoying this once-in-a-lifetime experience.

“I had a good job, but it’s a lot more interesting not going to the factory and having a horse like this. Man, retirement’s great! I don’t know how long it will last, but he’s been something else,” Smith said. “For some reason, God laid him in my hands. I’ve never had anything like him. He’s a gift from God.”