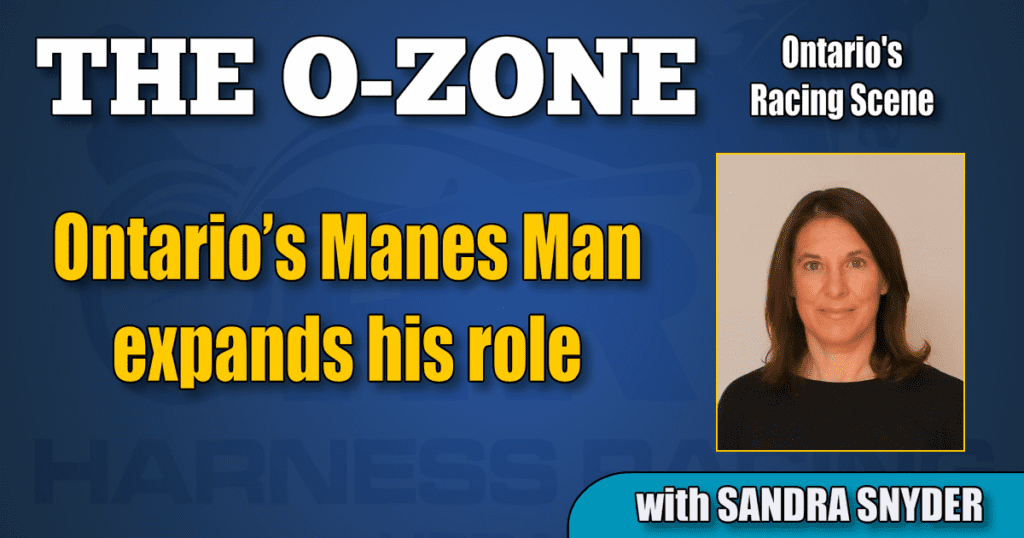 Owner, breeder and training center operator Bill Manes is now lending his expertise to the board of the Central Ontario Standardbred Association.

Broodmare, racehorse, stallion and training center owner Bill Manes had a lot on his plate before he was nominated to serve on the board of the Central Ontario Standardbred Association (COSA) this spring. In spite of his other responsibilities the Rockwood, ON resident decided to accept the nomination and since being elected in April has embraced his new role within the Ontario harness racing community.

“I’ve learned a hell of a lot, just the other side of it, right? Where the money comes and goes from. I’m the only one on the board who is not a driver or a trainer,” said Manes, who owned and operated a hardware store before his retirement. “It’s been good, though. We’ve got so much invested I kind of want to know what’s the next thing coming down the pipeline, if there’s something you can prevent or something you can get ahead of.”

At present, Manes’ investment includes the Manestreet Training Centre in Rockwood — a 120-stall operation with a half-mile racetrack they purchased in 2008 — and some 35 head of horses, including stallion Il Sogno Dream, six broodmares and their offspring, and about 16 racehorses. Trainer Chris Beaver has six racehorses in Ohio, including Il Sogno Dream, and the Ontario-based horses are split between Victor Puddy and Gerald Lilley.

Manes was introduced to harness racing as a child by his maternal grandfather Grant McMillan, who owned horses in the 1960s, and he made his own foray into ownership in the mid-1980s.

“It was through Jerry and Joanne Duford, we were friends of theirs, and Joanne said to me one night, ‘Why don’t you take this broodmare and we’ll split the foal?’ I said okay and the foal ended up being Play To Win. He made $220,000 back in the mid-1980s,” said Manes. “And then it just kind of evolved from that, instead of paying the government, go and buy another horse.”

Manes recalls Play To Win fondly, but Il Sogno Dream is unquestionably the horse he has most enjoyed in 35 years as an owner. The son of Cantab Hall and Le Reve was a Pennsylvania Sires Stakes winner at 2 and 3 and gave his owners the thrill of racing in all the major sophomore stakes, finishing fourth in the 2014 Hambletonian and third in the Kentucky Futurity. Through his aged career, Il Sogno Dream has been a regular in the open class trotting events, posting his personal best of 1:50.2 in the 2015 Allerage at Red Mile as a 4-year-old and banking $1,214,299 lifetime.

The horse stood his first season at stud in 2017 and has bred mares for the last three seasons then returned to the races once his breeding duties wrapped up.

“Il Sogno Dream, he’s my favorite, but he’s getting to the end of his racing career,” said Manes, who shares ownership of the stallion with Dan Manes of Erin, ON, Leonard Christopher of Acton, ON and Randy Christopher of Rockwood. “He’s (been) breeding in Ontario and I think next year, he’s back racing now in the States, and there’s a farm interested in standing him down there.”

While Il Sogno Dream’s career may be nearing its conclusion, Manes is looking forward to watching 2-year-old pacing colt Day Delight’s future unfold. The son of Bettors Delight and Kims Royal Day has a pair of wins under his belt, one of them a 1:52.1 score in Ontario Sires Stakes (OSS) Grassroots action, and makes his 10th lifetime start in Saturday’s $90,938 Champlain Stake at Woodbine Mohawk Park.

“We’ve got a couple of nice young ones, Day Delight, he’s going to be a real nice colt,” said Manes. “He’s just learning to race still. Just a big colt, a nice colt.”

Manes shares ownership of Day Delight — whose white nose has earned him the nickname Oreo — with Lloyd Stone of Portland, 10462217 Canada Inc. of Gloucester, ON and Wayne MacRae of Fall River, NS. To date, the colt has earned $27,348, almost half of his $55,000 purchase price at last fall’s Lexington Selected Yearling Sale.

Manes will be heading back down to Lexington this fall, as well as making trips to Harrisburg and the London Selected Yearling Sale. In addition to looking for future racehorses and inspecting the eight Il Sogno Dream yearlings on offer in London, the owner/breeder is also scouting for potential broodmares.

“We’re going to buy some more babies this fall. I’ve got three homebreds that are coming in this year. I’d like to upgrade our broodmares,” he said. “I’ve got three real good pacing mares, but I need to get a little bit better quality trotting mares.”

Among the pacing mares is Designated Leader, a homebred who earned $258,762 in her racing career and has produced mare Bad As Leader ($229,521) and gelding Big Bad Bill ($180,154) from Badlands Hanover, along with Sportswriter filly Crisp Mane ($134,334) from four foals. Her 2-year-old Big Jim filly Golden Leader has just one start under her belt.

“This year we had so much sickness. Monday (Sept. 2) we started jogging two of them back because they’ve been off all summer sick. I’m going to have a lot of fresh horses,” he said with a chuckle. “We’ve had some good years, but this has been a little bit of a leaner year, but that happens.”

That clear-eyed pragmatism has served Manes well in his business and harness racing career, and should also stand him in good stead as he works on behalf of COSA members in the coming years.