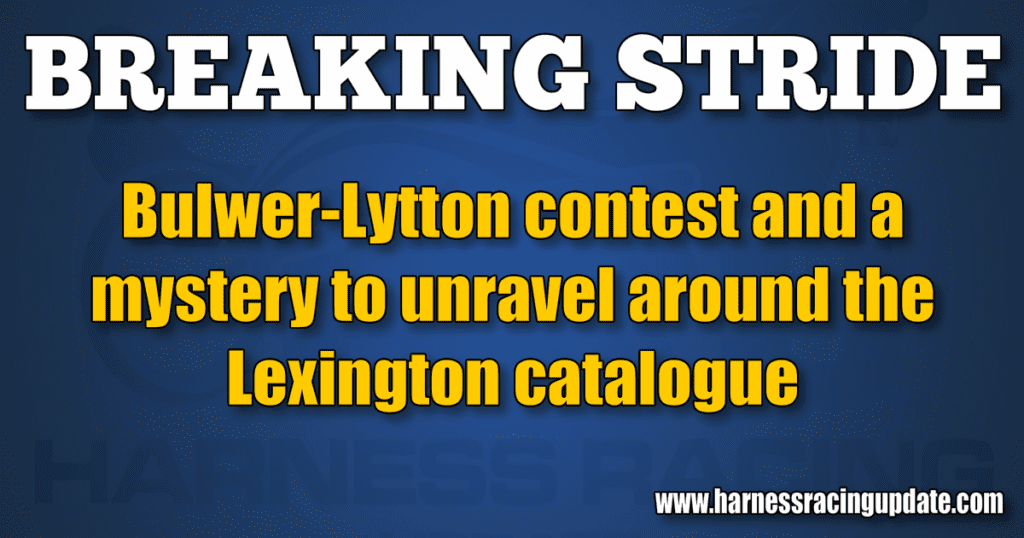 Are you a player?

Do you make wagers on the golf course, spend an hour each Sunday on the New York Times crossword puzzle or embarrass yourself at Trivia Night at the Dip-N-Dive Tavern? Do you blurt out wrong answers to the Sunday Puzzler on National Public Radio? Do you enter contests?

Gambling on harness races is probably your game of choice. Each wager is an attempt to solve the riddle of a race using the clues. We make our choices and back them with our money. In a very short time, we learn the answer and then face another challenge in the next race.

Purchasing a yearling out of a big fat catalog is also a challenge. In about 10 months we learn just how smart we were when we raised our hand and opened our checkbook.

Want to win big by solving a harness racing challenge?

Soon, another contest will appear in this little corner of the universe. You may want to play. You will not need to compose a sentence or write a poem. Your task will be to solve a riddle that will lead you to a single page in the LexingtonYearling Sales Catalogue.

The challenge will be difficult. Some potential winners will find mere satisfaction in a quest that leads to a successful conclusion. For the more mercenary among you, money will be on the line, serious money for a frivolous contest involving harness racing yearling that will soon be on the auction block.

Entering contests can have therapeutic benefits.
For example, imagine that your problem solving in harness racing did not go well and the riddles of the races were not solved. Perhaps the puzzle of paying your latest training bill with insufficient revenues looms.

You are in need of a chuckle. At this point I suggest you turn to another contest, a writing contest that I am yet to win, but each visit makes me laugh.

In the writing game, first sentences are important. If the reader does not finish the first sentence, often, they will not read the second sentence. To put this in racing terms, a poor first sentence is like breaking behind the starting gate. It is very difficult to recover from. Some first sentences in literature are remarkable and they remain etched into our mind –

“All happy families are alike; each unhappy family is unhappy in its own way.” (Anna Karenina by Leo Tolstoy).

“We were somewhere around Barstow on the edge of the desert when the drugs began to take hold.” (Fear and Loathing in Las Vegas by Hunter S. Thompson).

“You don’t know about me without you have read a book by the name of The Adventures of Tom Sawyer, but that ain’t no matter.” (Adventures of Huckleberry Finn by Mark Twain).

On the other hand, some first sentences are not remarkable. They are wretched. Literary tastes vary, but among the poster children for a bad opening sentence, you will find a novel, Paul Clifford, published in 1830 by Edward Bulwer-Lytton.

“It was a dark and stormy night; the rain fell in torrents – except at occasional intervals, when it was checked by a violent gust of wind which swept up the streets (for it is in London that our scene lies) rattling along the housetops, and fiercely agitating the scanty flame of the lamps that struggled against the darkness.”

This disjointed and rambling first sentence evolved into the Bulwer-Lytton Fiction Contest (BLFC). The annual contest began in 1982 sponsored by the English Department of San Jose State University. It challenges entrants to compose a truly terrible opening sentence and send it in for judging. Winners in a variety of literary genres receive fine awards. Three recent BLFC winners:

“On their first date he’d asked how much she thought Edgar Allan Poe’s toe nails would sell for on eBay and on their second he paid for subway fair with nickels he fished out of a fountain, but he was otherwise charming and she thought that they could have a perfectly tolerable life together.” Jessica Sasishara

“As the sun dropped below the horizon, the safari guide confirmed the approaching cape buffaloes were herbivores, which calmed everyone in the group, except for Herb, of course.” Ron D. Smith

“As the dark and mysterious stranger approached, Angela bit her lip anxiously, hoping with every nerve, cell, and fiber of her being that this would be the one man who would understand – who would take her away from all this – and who would not just squeeze her boob and make a loud honking noise, as all the others had.” Ali Kawashima

But I digress, back to the harness racing business at hand.

Next week in this slot you will find a PRACTICE round, a run-through for The Dam Family Game (TDFG). Tune in next week. Bring a pencil. Earn money. Be a player. Have fun just like this final Jeopardy player.