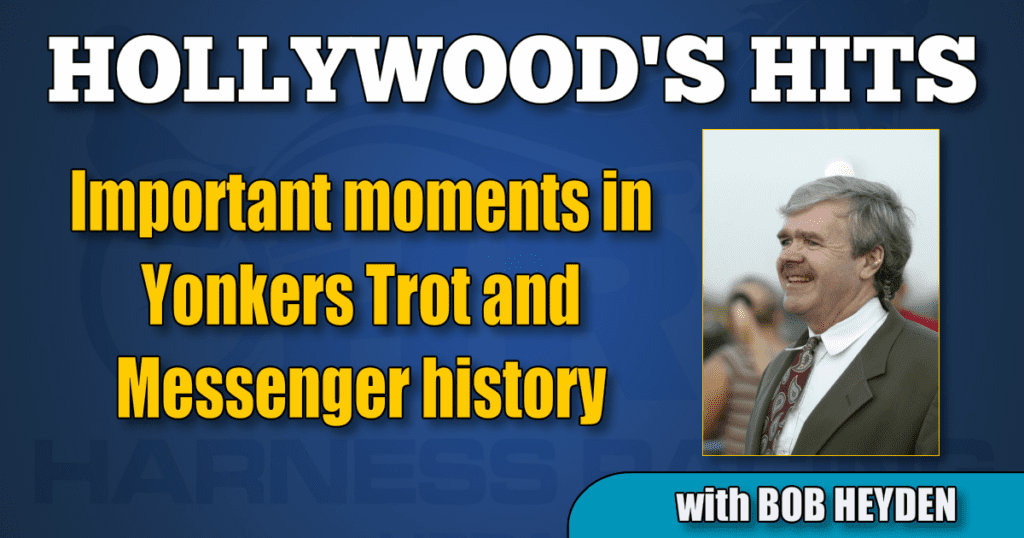 1956 — In the Messenger, filly Belle Acton kicked off the final leg of the Triple Crown for pacers with a win for Billy Haughton. Fifty-seven years later, son Tommy also won it with Ronny Bugatti.

1986 — Amity Chef won the Messenger as second choice over 3-5 favorite Barberry Spur. John Campbell and Blair Burgess — a full 20 years before their Triple Crown triumph with Glidemaster — teamed up. H H Shadow, the spectacular filly for Jody Stafford, paid $4.60 taking her elim and was second in the final.

1989 — An unusual year for the Triple Crown for pacers. Why? Because Dr. Ken Seeber won both the Cane and the Messenger with two different colts and neither was in the Jug (Sandman Hanover and Dancing Master). That was the year that Goalie Jeff dominated in the Jug after being second in his Messenger elim and final.

1991 — was the year of Die Laughing winning the Messenger for 26-year-old Richie Silverman. Artsplace, in his only appearance in a Triple Crown event, was ninth. The time was 1:51.1 — wire to wire for the winner in this 11-horse field.

Trond Smedshammer won the Yonkers Trot twice, the two years it was not at Yonkers. He won it in 2004 at Hawthorne with Windsongs Legacy and in 2005 at Freehold with Strong Yankee.

Glidemaster holds the record for the most amount of money to race for in the combined three Triple Crown races: $2,754,930. He won half of that — $1,377,465. John Campbell drove him for the first two-the Hambletonian and the Kentucky Futurity and George Brennan was in the bike for the Yonkers Trot.