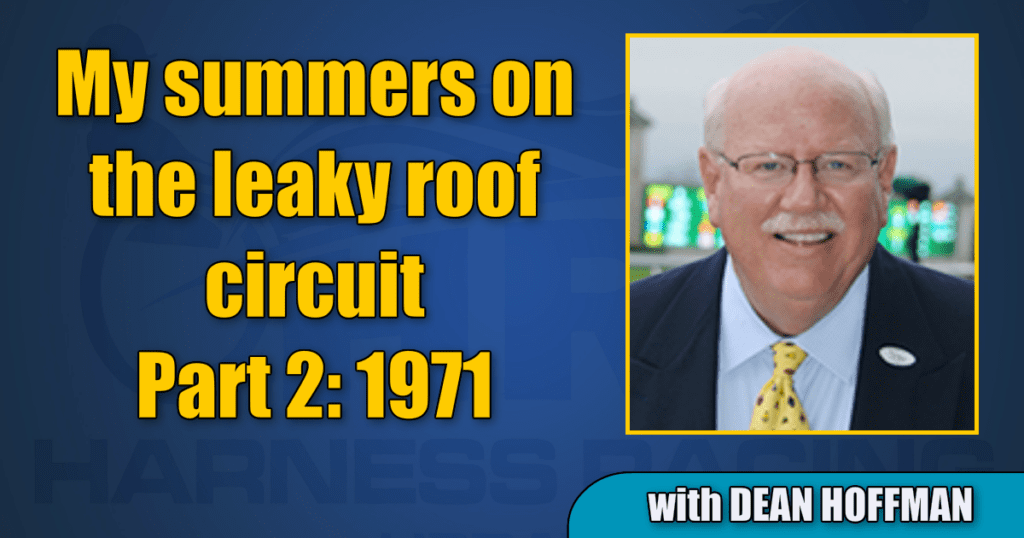 Trading barn clothes for a suit and tie and a job on the midwestern fair circuit.

In July, 1971, I sat in the Loft Restaurant in Mount Vernon, OH and listened in rapt attention to Roger Huston, the guest speaker at the luncheon meeting of a local club.

Huston was the track announcer for the upcoming harness racing program at the Knox County Fair. He’d been given the names of several businessmen in the audience at the restaurant, and Roger proceeded to call a fictitious harness race using the names of these community leaders. Roger made it his race call dramatic and funny — and the audience members loved it.

I thought then — and think now — that it was a great way to get outsiders interested in harness racing. I’d bet a fair number of luncheon guests that day later went to the Mount Vernon fair to hear Roger call the races.

I fully realize that most racing fans have a favorite announcer. To me Roger Huston is still the gold standard. I have enjoyed the calls of many other announcers, but I went to so many county fairs in Ohio in 1970-71 when Roger was calling races that his style was drummed into my head.

My second summer on the road working at the county fairs for the USTA was more productive than the first. I think my schedule was better and I understood my responsibilities much better. I was primary to assist in getting news coverage, but always willing to help in any way possible.

I recall going to a fair in Michigan and I was told that Mr. So-And-So was in charge of publicity. I sought him out and found and elderly gent. (I was 21, so everyone over 40 seemed elderly). I told him that I was from the USTA and I was there to help with publicity.

“It’s 9 o’clock in the morning and I’ve already been on two radio shows, did a TV interview, and helped the newspaper photographer line up some photos,” he told me. “So how are you going to help me?”

I gulped and admitted that he probably didn’t need help.

But many fairs did need publicity assistance and they were glad the USTA sent someone.

My father supervised the racing program at the Carthage Fair in Hamilton County (Cincinnati), Ohio for many years. He was the speed superintendent, stall man, track announcer, and wore a few more hats. I encountered a lot of one-man-bands at county fairs. Publicity was often overlooked.

I was pressed into service in other ways. I recall being at Sidney, OH where the track narrowed like a funnel from the start to the first turn. A man warned me that horses often got tangled up there leaving the gate.

Sure enough, a horse went down in one of the early races. He hit the track about two or three horses out from the rail. I was standing in the infield just beyond the finish line and I darted to the fallen horse. He thrashed around as we tried to control him.

Fear struck me when I looked up the track and saw the pacers sailing down the stretch to complete the first half-mile. They were taking dead aim at us. Would a horse spook at people on the track and flatten us?

Fortunately, they passed inside of us and we got the horse up before they finished the mile.

Accidents were not unusual at fairs. I was at Medina for the Honey Bee Stakes and I recall seeing Ohio businessman and breeder Bob O’Donnell, who operated Hobby Horse Farm, driving a Dancer Hanover filly named Richelle Hanover. In the last turn, she spooked at something and went over the hub rail, unceremoniously dumping Bob.

In later years, I got to know O’Donnell quite well and I always reminded him of that incident.

“I tore the ass out of my pants,” Bob said with a laugh. (Richelle Hanover made amends when her first foal Misty Raquel won the 1976 Jugette).

Winning the trotting division of the Honey Bee at Medina that summer was Killbuck Mary, an iron-tough mama trained and raced by Dick Buxton. It seems like everywhere I went that summer I saw Killbuck Mary and stablemate Rosalie (driven by Buxton’s assistant Tom Sells) dominating the freshman trotting stakes.

I also recall seeing Killbuck Mary race at Wooster, OH, her hometown because she was raised at Bob Critchfield’s Gay Acres Farm just outside Wooster.

I got my first ride ever in a starting gate at Wooster when legendary Riley Couch let me ride along. The view from the gate gives you an entirely new perspective on racing — especially the start, of course — and I recommend that everyone try it.

The pot of gold the end of the county fair rainbow in Ohio then was the Ohio State Fair in Columbus. Huge crowds would witness the fair racing there over four days — not necessarily because they loved racing but because popular stage entertainers followed the racing program. Seating was on a first-come basis, so if you wanted a good seat for acts like Johnny Cash you had to stake out your spot early and watch the harness racing.

There were problems at the Ohio State Fair for racing, but I think it was a sad day when these signature events on a big stake were moved to Scioto Downs. Harness racing in Ohio lost a large and captive audience when it left the state fair.

Roger Huston called races at countless fairs in Ohio, but the man at the microphone at the Ohio State Fair was Phil Mauger of Mt. Vernon. He’d been the mayor of that quaint county seat community and had a politician’s gift of gab. But Phil periodically got confused during a race.

In 1971, Gene Riegle had an entry in a division of the Buckeye State Pace for freshmen. The boss man drove Kit Hanover, a big, bay blockbuster by Tar Heel, while son Alan Riegle drove a smallish chestnut named Marvin Hanover.

As the field rushed away from the gate, Kit Hanover shot to the front and Marvin Hanover dallied in the rear guard. But Phil Mauger confused the two colts from the Riegle Stable.

“And it’s Marvin Hanover showing the way as they head down the backstretch,” said Phil. He called Marvin on top all the way when it was really Kit Hanover, who never got a call. Phil realized his mistake as the winner swept across the finish line.

“And pacing home first is Mar…….Kit Hanover!” said Mauger. (Every announcer has a few bloopers, just as every typewriter jockey like yours truly makes errors).

Kit Hanover actually wasn’t the best freshman pacer in the Riegle Stable. That honor belonged to Jay Time, a smallish colt who was as handy as a Swiss Army knife and he loved looping the half-milers at the Ohio fairs.

The Riegle Stable was based in Gene’s hometown of Greenville, a community which avidly supports the Darke County Fair. I knew that motel rooms were at a premium during the fair, so I actually reserved rooms for Tuesday through Thursday in Greenville. I’d slept in a stall at Greenville when I was rubbing horses in 1968-69, but didn’t want to do that again.

When I got to the motel, the clerk said he had my reservation for “Tuesday and Thursday nights.”

I reminded him it was Tuesday thru Thursday night.

“Yeah, yeah, we’ll take care of that,” he reassured me.

But when I got back from the races on Wednesday afternoon, I found another person in my motel room. I marched to the office and complained, and quickly learned that the clerk had not taken care of the mix-up.

“But you still have a room for Thursday night,” the new clerk reminded me.

Thursday night was 24 hours away and I didn’t have a place to sleep on Wednesday. Someone suggested that I try a small hotel in the center of Greenville.

When I arrived, the man told me, “You know, it’s fair week and everything is booked. I do have one room. It’s only got a bed and a chair. If you want to use the bathroom or brush your teeth, you’ll have to walk to the gas station uptown.”

“I’ll take it,” I said quickly. The rate of five bucks a night seemed a bit high, but I was in no position to argue because post time was about an hour away.

After the races on Thursday night, I had to be in Wellington, OH for races the next afternoon. That was long haul with no expressways, so I began driving north and found a room in Troy, OH about 1:30 in the morning. The only room available was a meeting room with a Murphy bed concealed somewhere in the wall. I have not-so-fond memories of walking around that large room tapping on the wall trying to locate that bad. I was dead tired.

I vividly recall a pint-sized daughter of Henry T. Adios named Thimble, who bowled over everything in her way for trainer/driver Fred Hess. She was an evil wench, however, and I can still recall her trying to kick during the trophy presentations.

I saw racing on the track at Smithfield in Ohio that required horses to go three laps to make a mile. I seem to recall that officials rang a bell after two laps to reminds drivers that they weren’t finished.

Also, the track at Lisbon was slightly downhill in the first turn and thus slightly uphill in the last turn. That resulted in some wild scrambles soon after the start and some tired county fair horses after they had gone three-quarters of a mile.

I was reunited at The Red Mile with Roger Huston that fall when I served as publicity director for the epic ‘71 fall meet. That’s when Steady Star and Albatross, respectively, paced the fastest mile ever and the fastest race mile ever.

Roger was the announcer and had a TV program. I was a guest and I recall discussing the upcoming meeting of Delmonica Hanover and Killbuck Mary. He asked me to pick a winner and I went with sentiment and picked Killbuck Mary because I’d seen her win so often and so effortlessly at the Ohio fairs. But Delmonica won that battle.

My two summers on the Leaky Roof Circuit taught me a lot of lessons in life and taught me a bit about publicizing harness racing. It wasn’t always easy or fun, but I look back on those summers with great fondness.