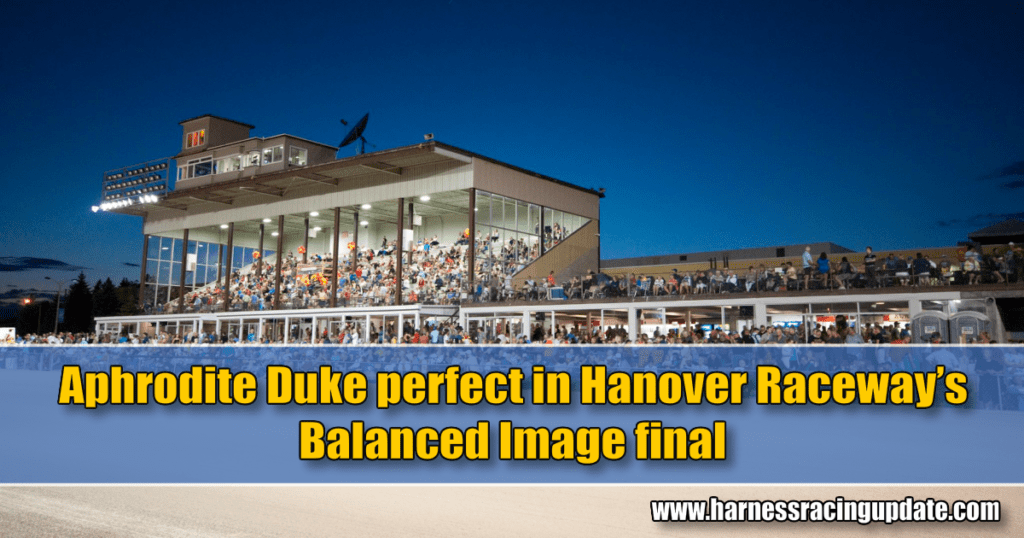 Fast conditions accompanied the race promoted as the second-biggest of the Hanover Raceway calendar, in terms of both purse and prestige.

The Ontario half-mile track played host to a field of eight freshman trotters in the highlight event of its Saturday (Aug. 24) card, the $56,600 Balanced Image final.

#6 Aphrodite Duke was one of three trotters to leave fastest; #3 Haven Seelster (Keith Jones) timed the gate and grabbed the lead, with 7-5 favorite #7 Awesomedabra widest of the trio. There was early confusion when #2 Golden Gavel (Matthew Bax) and #9 Chocolate Pie both broke on the first turn, interfering with #4 Tuckers Out (Stephen Byron) and #5 Lifeisgood Hanover. Haven Seelster and Aphrodite Duke were one-two going to the :29.2 opening quarter; the 5-1 filly circled the leader and opened up by three lengths at the 1:00.1 midway point. Awesomedabra broke while advancing from sixth as the field passed in front of the grandstand.

It all worked in favour of the eventual winner, Aphrodite Duke.

“At the half, I saw everybody spread out. I don’t know what happened, but I kind of had a game plan in mind. She’s pretty sure-footed so I wanted to get her into place up close,” said winning driver Ryan Holliday. “The rest is history.”

His filly was never headed as challengers took their shots. Haven Seelster faded from the scene by the 1:31 flat three-quarters, but #1 Marbellos (Bruce Richardson) was on the move first over, with #4 Tuckers Out opting to go three-wide. Aphrodite Duke was pursued down the stretch by Tuckers Out, who finished second, and show finisher Lifeisgood Hanover. Awesomedabra recovered for fourth. Placings due to the breakers did not affect the top four finishers.

The 2019 Balanced Image final was the second win in six seasonal tries for El Titan daughter Aphrodite Duke, who finished second in all her other starts. Out of the Andover Hall mare Single Pans Reflex (3, 1:56.2s; $31,404), she is a homebred owned by Glenview Livestock Ltd. of Wallenstein, ON. The mare’s best offspring to date is Baby Kay (5, 1:55.2f; $99,740); Aphrodite Duke is her last registered foal.

The race was a breakthrough for winning driver Ryan Holliday, who catch drove Aphrodite Duke for trainer Andrew McCabe, the filly’s usual pilot. “I’m telling you, it’s a relief!” said Holliday post-race. “A monkey off the back. I don’t know how many years I’ve been driving here, but it’s good to get this one out of the way.” He then thanked Glenview Livestock for the catch driving opportunity.

Aphrodite Duke didn’t broach Princess Lilly’s 1:59.4h divisional track record. But her performance was, as announcer Greg Gangle called it, “flawless in 2:01.”
The Balanced Image is named in honor of the Canadian Horse Racing Hall of Fame trotting sire who put Ontario on the breeding map in the 1990s. He sired nine millionaires, including the first Canadian-sired Elitloppet winner, Billyjojimbob, and the first Canadian-sired Hambletonian champion, Yankee Paco. Balanced Image is found close up in the pedigree of Royalty For Life, the best-represented sire (three finalists, one scratched) in the 2019 Balanced Image.

Also on the Ontario Sires Stakes Grassroots-laden card, Sizzlen Hot Herbie (Nat Day) outduelled a fast-closing Twofourroadie (Paul Walker) in the 45th edition of the $9,000 Walker Invitational Trot. All Out Henry (Jean Bernard Renaud) hung on for show money in the 1:59.3h mile. Five-year-old Sizzlen Hot Herbie (3, 1:55.4s; $70,868) is owned by David Wilkinson of Goderich, ON.