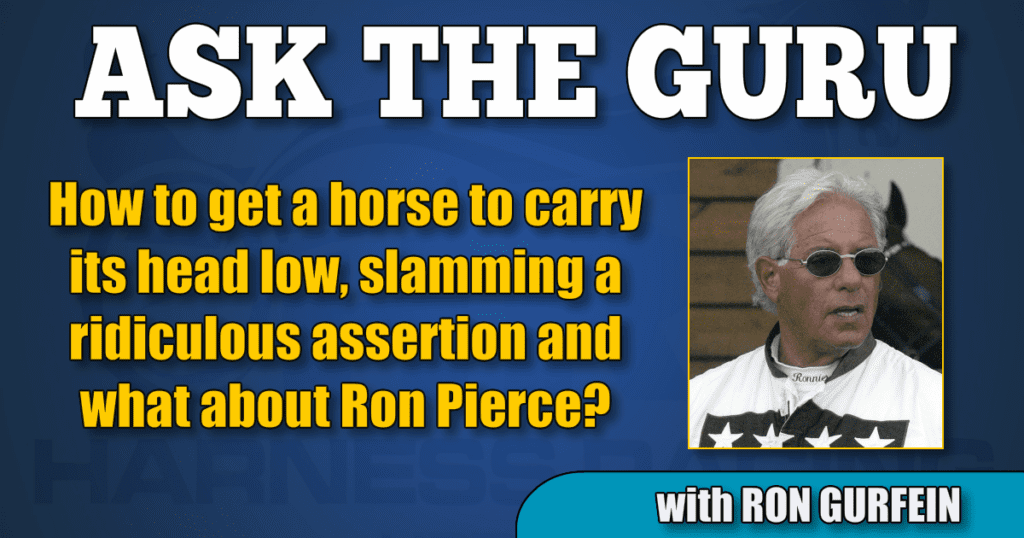 How to get a horse to carry its head low, slamming a ridiculous assertion and what about Ron Pierce?

Tidbits: In 1839, Edward Bulwer-Lytton and English author coined the phrase “the pen is mightier than the sword. “Your emails have proven this to be true. Although you haven’t given me hard facts to deal with much of what you (my readers) have written, you have created some sort of pathway to the truth in the issue of beards and integrity in our sport. Although I must protect my sources, I truly believe that with your consistent help and the aid of several of the local commissions, together we may be able to put something of a dent in the use of illegal drugs in our sport and horse racing in general. Don’t give up, keep fighting we can win. Stay tuned…

I realize there is such a thing as National Pride but my friends along our northern border carry it soooooo far when it comes to horses. The Greenshoe / Forbidden Trade comparison ends here… After making the fatal error of bringing the fractious colt Greenshoe to the Hambletonian with three weeks rest and entirely on edge, the talented young Marcus Melander got right back on track with a crushing six-length victory in the Zweig Saturday night at Vernon Downs. Not only was he comfortable sitting in a hole, but he actually left the gate a bit, something he hasn’t done at all in his sophomore campaign. I didn’t see one bad step. Hopefully we are in for a great ride.

Unfortunately, training horses has a fear factor that will tend to affect decisions during a colt’s career. Greenshoe is the kind of colt that will cause fear to influence your actions. Every time he goes to post Marcus must hold his breath, as I do. After the Stanley Dancer I am sure he thought that waiting for The Hambletonian as his next race would be easier on both of them. I am certain he just didn’t have the experience to know that the possibility loomed that the colt would be too fresh. I personally have faced this dilemma with normal horses and made similar errors. That said, many great stallions were not privileged to enter the winner’s circle on Hambletonian Day, Greenshoe may well be another.

Thanks to Nancy Johansson for taking time out from her busy schedule to email me about the strange queries about her reception of Scott Zeron in the winner’s circle following his victory with Captain Crunch on Hambletonian Day. Nancy pointed out the stress of the day and of the relief of winning over the joy involved. She raced seven horses that day and was more looking forward to the stress being over than winning or losing. I personally felt the same after two Hambletonians. The third I really enjoyed because my hopes were at a lower level. According to Nancy, all is well in the Zeron/Johansson relationship. As well, she praised Scotty for his handling of the colt for his freshman and sophomore campaigns.

According to the Courier-Journal, The partnership of Keeneland and Churchill Downs have broken ground and will continue construction of Oak Grove Harness Racetrack in Western Kentucky. The initial meet is scheduled for 12 days shortly after the meet ends at the Red Mile. Oak Grove is 223 miles south west of Lexington and 59 miles north west of Nashville with a population slightly less than 8,000.

Quote of the week: Murray Brown was making a comparison in the middle of a Facebook tete-a-tete between a great horseman and Alexander the Great. I pointed out, facetiously, that it was an unfair discourse as Alexander was educated by Aristotle and no horseman had that type of upbringing. Chris Christoforu said, “I did, just ask my father.” Truly a classic…

I rarely get the opportunity to go to see shows on Broadway since moving to Philadelphia. Last year, I spoke of seeing a revival of My Fair Lady in the round which was a fabulous show. Saturday, I was invited again and topped the experience with The Temptations, a marvelous adventure into the story and the music of the ultra-talented singers and dancers that created that group. Anyone with the opportunity should not miss it, especially if you grew up in that era. It was truly non-stop fun.

Stephen Moss ( an old friend from California) asks: About a week ago you made the point we lost for great drivers in our driving colony. Why didn’t you include Ron Pierce? On the replacement side would you include Scott Zeron and Andrew McCarthy?

To begin with I didn’t name Ron Pierce for the same reason I didn’t include Hugh Bell or Buddy Gilmour. I said “recently,” therefore I had to draw a line somewhere close to recent time. Ronnie called it quits before Mike Lachance and John Campbell, etc.

As for Scotty and Andy they both would certainly fit the category of young guns that I didn’t mention because there are so many up-and-coming great young drivers I didn’t want to omit a name and be sorry I did. Both of them have proven themselves already. Scott has already won two Hambletonians and Andrew has become the main stick for the Alagna Barn, one of the top outfits in harness racing.

Bobs Swiftrun Mail asks: I have never seen a Norwegian tie down, just a regular martingale. Do you have a picture? How does it work? I love a horse that carries his head low. Is there some sort of secret to get a horse to carry his head low?

Unfortunately, I don’t have a photo of the Norwegian martingale or tie down. But a picture wouldn’t really be of any more help than an explanation. There are two basic differences between a standing martingale and a Norwegian tie down. The American or English version is made of leather and the Norwegian is made of a stretchy cord like you would use to tie a Christmas tree to the top of your car or secure something in your boat.

The other difference is the former is attached to the race halter under the chin while the latter goes over the head, behind the ears and serves as a deterrent to the horses ability to raise his head.

I love horses to carry their heads low also. In fact, my dear friend Sam McKee (R.I.P.) always told me it was easy to recognize my colts on the track as they always had their heads down. The reason for employing this theory is simple physics. When a horse’s head is low the air goes straight from his nostrils to his lungs, when it is high the air has to make a turn down to get to the lungs, a slower process in getting vitally necessary oxygen.

It’s easier to get a colt to carry his head low than high because it is their natural way. Rarely do you see a great horse in a paddock trot with his head high and arched, they trot across the field with their head way down.

To achieve this in harness, throw your check bits in the garbage and instead use a leather chin strap. I promise 95 per cent of the time that’s all you need to do. Almost every horse I ever raced on a championship level wore a chin strap.

If that doesn’t work for your colt, try a ring martingale with no head check at all. It forces the bit down on the horses jaw and he will lower his head to make the bit more comfortable in his mouth. You can add the head check very loose to make your driver happy when it’s time to race.

Fred Wolf asks: If an entry comes in first and third does the horse that finishes fourth get the 12 per cent for third or eight per cent for forth?

Entries have nothing whatsoever to do with purse distribution. Where a horse finishes determines the purse. Be aware that in 2019 there are many changes in stakes purse distribution as some venues have taken the liberty to pay all starters. For example, the Hambletonian final didn’t pay 50, 25, 12, 8 and 5. The final paid 50 per cent to the winner and 1% to finishers 6-10 there for slightly diminishing the return for the horses that finished 2-5.

Randal Lawton asks: I am just going to infer something. I have all the respect for Lather Up trainer and team, but I also feel they fit the bill, in the beards racing fallacy. So tell me how the George Teague Stable team does not fit the BEARD scenario?

Randal your question was so ridiculous I was forced to publish it. A beard is a person that exists in name only and provides a cover for a trainer that is either suspended or barred. What that has to do with the Teagues, one of the most intelligent teams in our sport, I do not know. I can’t say this is fact, but my guess is that George, out of respect for long-time assistant Clyde Francis, lists him as trainer, because the Teague name is evident in the program with his son Montrell as the very competent reinsman and George would like to give Clyde the limelight.

Thanks again to you all for your kind words. Please keep your questions coming in.

Don’t miss major Grand Circuit action Friday and Saturday at Mohawk, Saturday at Yonkers and continued Sires Stake action at the Red Mile. Have a wonderful week.
Have a question for The Guru?  Email him at GurfTrot@aol.com.