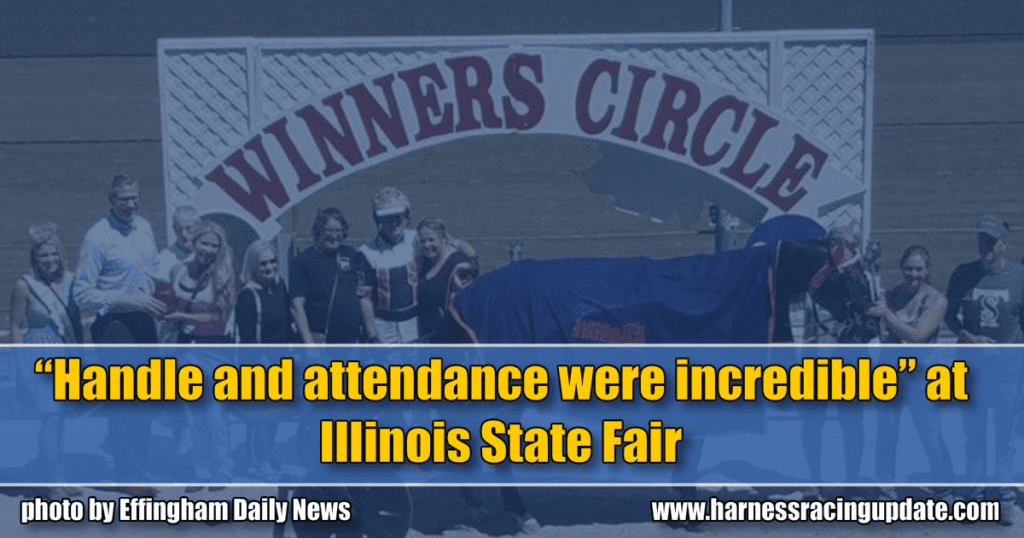 “Handle and attendance were incredible” at Illinois State Fair

The gaming expansion bill in Illinois is already having a positive impact on the state fair circuit based on strong results in Springfield.

“Handle and attendance were incredible,” said Jim Miller, general manager of racing for the State Fairs, in providing a rundown of the racing programs on Aug. 9, 10, 14 and 15. “We saw a renewed interest in the fan base. There was excitement again, a renewed enthusiasm. A lot of it has been spurred by the passage of the gaming bill.”

Miller’s full-time job is working as director of publicity and horsemen’s relations at Hawthorne Race Course, which has been putting on the State Fair programs at Springfield and DuQuoin since 2016.

“This was our fourth year and it was easily the most successful (at Springfield),” he said.

“Every top driver from Hawthorne was there — Casey Leonard, Kyle Wilfong, Kyle Husted, Ridge Warren — and Brandon Bates came in from Indiana,” Miller said. “Steve Searle and Mike Brink (who are Hawthorne regulars) were the trainers with the most wins. The guys racing at the county fairs — Freddie Patton, Ronnie Gillespie and Roshun Trigg —came and they raced competitively.

“The weather was great and the track was in perfect condition. Horses were just gliding over it. On the final day, all 12 winners set lifetime marks. The crowd started cheering when horses were a quarter mile from the finish. You’remyhearthrob, who stopped (2018 Illinois Horse of the Year) Fox Valley Gemini’s winning streak at 16 last year, was the horse who caught everybody’s attention. Kyle Wilfong drove him and he won in 1:49.4.

“Gov. Pritzger was on site and spoke on the final day. He was very upbeat, very positive in talking about how he wants to turn the industry around and create more jobs.”

Miller went into this weekend’s other State Fair meeting at DuQuoin on Friday night and Saturday afternoon with high hopes that the wave of enthusiasm he saw in Springfield would carry over.

Hawthorne will be dark both nights and DuQuoin will simulcast its programs across North America on the Hawthorne network.

“Instead of horsemen having to split stables on Friday and Saturday the focus is going to be on DuQuoin,” Miller said. “We’ll be racing under the lights on opening night of the fair and the crowd coupled with the simulcast should be a huge boost for handle. On Saturday we’ll simulcast nationally as well but we’ll start at noon to enable horsemen to get back to Hawthorne for the Sunday night card without having to drive through the night.”

Tim Norman, the Department of Agriculture’s bureau chief for County Fairs and Horse Racing, and three of the state’s foremost breeders, Dr. Ken Walker, Carl Becker and Ed Teefey, share Miller’s optimism that Illinois racing is emerging from the major recession caused by its inability to compete with out-of-state tracks — most notably Hoosier Park— that have on-site casino wagering subsidizing their purses.

“In the last 15 years I don’t remember seeing as many spectators at Springfield as we saw this year and county fairs are up 25 per cent to 30 per cent in attendance,” Norman said.

“For the first time since 2009 I was able to use money in our budget that was (earmarked) for Grand Circuit racing and just sat there. This year I got it changed and we were able to use that $178,000 for (Illinois-bred) racing at the State Fairs. Last year we raced for $5,500 (average purses per race); this year it was $8,075.

“When casino gambling starts (at the pari-mutuel tracks) we’ll get 12.75 per cent (of the adjusted gross revenue) which will enable us to increase purses even more.”

Springfield, Du Quoin and Indianapolis were part of the Grand Circuit that lured many of North America’s leading harness horses before the Illinois fairs dropped out in 2010 because of state budget cuts that slashed the necessary funding.

A casualty was the World Trotting Derby. In 1981, it replaced the Hambletonian — which had been contested at DuQuoin from 1957-80 — and the WTC was a fixture at the fair through 2009. That year, DuQuoin had five days of racing worth $1.47 million in purses and the World Trotting Derby was a $540,000 race won by Muscle Hill, who went on to become North America’s Horse of the Year.

The decline in Illinois was accelerated in 2016 when the bankrupt sister tracks, Balmoral and Maywood, were forced out of business, producing not only an absence of major races but also a substantial curtailment of the racing schedule in the Chicago metropolitan area. Hawthorne became the only harness game in town but the standardbreds had to time-share because of the track’s spring and fall thoroughbred meetings.

This reduction in racing dates had a ripple effect on breeding. With fewer Illinois opportunities for owners to recoup their investment many breeders went out of business and most of those who remained got involved in breeding programs in other states.

“We’ve only got 140 yearlings this year and Indiana has around 2,500,” said Teefey, an Illinois Harness Horsemen’s Association director who is past president of the Illinois Standardbred Owners and Breeders’ Association. “It’s the lowest number in Illinois since pre-1950.”

Teefey is an overseer of the racing program at the Brown County Fair in Mount Sterling and he conducts the Illinois Classic Sale of yearlings, scheduled to be held at the Springfield Fairgrounds on Labor Day.

“We had two days of racing at the Brown County Fair and for the first time in 16 years we opted not to have pari-mutuel betting simply because it’s so hard to get full fields because of the dwindling horse population,” Teefey said.

“We had a couple of races go for as much as $12,000. When you have five horses in a race that’s a pretty good opportunity in these rather depressing times. Without the people from Mississippi (a contingent of black trainers and drivers who migrate to Illinois every year to race from June into September) we wouldn’t have been able to fill the races at a lot of fairs. They provided the majority of horses at a lot of fairs and they did a great job.

“At the sale we’ll be selling 70 Illinois-bred yearlings, which is half of the whole crop,” he said. “About 35 of the ones we’re selling will be Indiana-breds.

“The next couple years it’ll be challenging to fill the Illinois-bred races. The last few years, like many others, I didn’t breed in Illinois but, with the anticipation we might get the gaming bill, some of us hedged our bets. I’ve got a dozen mares and I bred about half of them in Illinois this year.”

Walker Standardbreds was a perennial producer of outstanding Illinois-breds prior to the recession but Dr. Walker didn’t breed any in 2018. At the Illini Classic Sale he will be selling 16 Indiana-bred yearlings and 2 that are Canadian-bred.

However, he is going back to putting all of his eggs in the Illinois-bred basket.

“We bred everything in Illinois this year,” he said. “We gambled a little bit before the bill was passed, thinking and hoping and praying it would be passed.

“We bought two stallions, Somestarssomewhere and Time to Roll. We bought a few more broodmares and we’re up to about 65. We used to have more than 100 broodmares but we don’t want to get back to that number. We’re focusing on quality rather than quantity. I’m hoping more farms start up. We’re down to only a few. We need more farms.”

Despite the recession, Becker persisted in making Illinois-breds the focal point of his breeding endeavors at his Fair Meadow Farm in rural Altamont.

He has remained a fixture in the announcer’s booth at many of the 27 county fairs conducting racing this year as he has been since the late 1960s. Often, he is joined by his son, Kurt, who has become a prominent announcer because of his work at thoroughbred and automobile tracks and at thoroughbred auctions in the U.S. and Canada.

“We had a strenuous summer as far as getting enough horses to race but for the most part (state-wide) the crowds were up,” Carl Becker said.

“Here in Altamont (at the Effingham County Fair) we had six days of racing and the crowds were amazing. We hold about 2,000 people in the grandstand and some days it was two-thirds full. We give away a lot of door prizes and have a pick-the-winner contest and that helps. We raced a couple of 3-horse fields but they were competitive and we even had a track record.

“Greg Sapp (the station manager) has given us tremendous support on his (Premier Broadcasting Inc.) stations, XFM 97.9 and KJ 102.3. They carried the live call of the races each day and between the races there was commentary. For example, Kurt and I came on and explained the gaming bill.”

The massive expansion bill that also increases the number of conventional casinos and permits sports betting will allow Hawthorne to have 1,200 gaming positions and permit 50 video gaming terminals at Springfield and 30 at DuQuoin with 15 per cent of the take going to purses at these two fairs and the county fairs.

It also permits the establishment of a new harness racing/gaming venue to be located in one of seven suburbs south of Chicago.

When applications for 2020 racing dates were filed on July 31 a would-be-builder, real-estate developer Rick Heidner, applied for a Dec. 6-29, meeting consisting of 12 programs at a track he wants to build in Tinley Park.

If Hawthorne and a new track are operating in 2021 they will be guaranteed a combined minimum of 160 harness dates and in 2022 the number will go up to 200.

“We’re looking at the numbers of mares being bred to steadily increase,” Becker said. “It’ll take a few years but the fairs will regain their glory, back when they used to have 10-race cards and full fields every race. I also think that the county fairs that stopped racing like the ones in Anna, Albion, Marion will come back.”