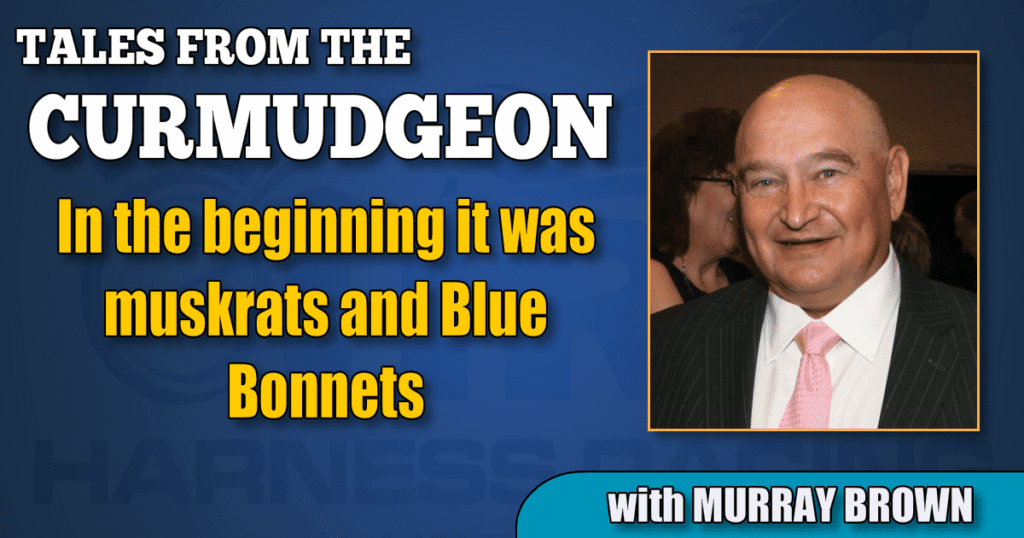 In the beginning it was muskrats and Blue Bonnets

Stretching muskrat pelts, working as a pullman car porter, hauling 50-pound sacks of flour and bartending were just some of the jobs Murray Brown took on before harness racing saved his soul.

Thanks to all of you for the supportive posts, emails and the questions I’ve received in the last week.

Frankly, I’m nervous. I hate working under deadlines. It’s somewhat similar to having to get The Black Book to the printer on time. I never missed the deadline, but it always brought on stress.

The thought of writing a regular column brings about an onslaught of hives and hyper ventilating.

How about at the very beginning?

I grew up in Montreal and when I was 16 I was on my way to becoming an unwashed layabout — or in simplistic terms, a bum.

I was living with my brother Sam and his family. My mother had passed when I was 15 and my father had died when I was two.

Living across the road from us was my dear friend Larry Sazant. Larry’s father was an avid race goer. Occasionally Larry and I would accompany him to the races at Blue Bonnets.

My most vivid recollection was of walking through the Canadian Pacific railroad yards, the shortest route to Blue Bonnets Raceway from where I lived. It was trespassing and strictly forbidden to do so, but when you are 17 and already a little bent, who’s afraid of the railway police? Little did I know, but I got away with it that time.

The railway tracks bordered on the stable area at Blue Bonnets. The first stable I came to was that of Del MacTavish. I encountered a young friendly guy who said he was Duncan, Del’s son. We got to talking and it turned out that he drove horses in addition to helping his dad train them.

Even at that age I was prone to gambling. The first question out of my mouth was “Are you driving anything tonight and can you win?” His answer was yes and yes. The horse was named The Monarch C. His sire was a horse by the name of Sam Hanover. That was the first time I had heard the name Hanover associated with horses. He did win, paying something like $10 and I bet my hard-earned two bucks on him and I was hooked.

From that point forward my interest in racing increased. Any time I could get to the track I went. I became a reasonably good handicapper. But I often was broke, as well.

To feed my habit, I always worked and often very hard. My first and very toughest job, aside from a paper route, was working for my older brothers Sam and Charlie at Brown Brothers Fur Factory. My job there was soaking muskrat pelts and then stretching them by hand. It might have been the very worst thing I did to earn a buck. It was before air conditioning. Describing it as being hot would be an understatement. The worst part, though, was the fur hairs ever invading all the open orifices of my body. Each day I had muskrat hair in my eyes, my mouth, my ears and my nose — not very pleasant. In addition, I’d also get terrible blisters on my hands from stretching the skins.

From the muskrats I moved up to spending my summer working as a pullman car porter where my job, was to carry all the luggage, make 18 beds and shine 18 pairs of shoes each evening. The train trip from Montreal to Winnipeg, my usual route, took the better part of three days. I was allowed three hours of sleep each night. It wasn’t easy, but far more satisfying than stretching muskrats and better paying, too, although a lot depended on how the tips were. I was usually the only caucasian porter on the train. But I was readily accepted, especially by a man by the name of Reggie Green who was extremely kind to me.

The next summer I worked at supplying food parcels to workers on the DEW line. The job mostly consisted of 97-pound me carrying 50 pound sacks of flour to be loaded.

After the DEW line, I became a bartender, mostly at social events like parties, weddings and Bar Mitzvahs. I loved doing that. I loved mixing drinks and interacting with all the guests.

Throughout the various jobs I maintained my addiction to harness racing and betting on the horses.

I distinctly remember the night when my interest moved from betting on horses to what made them as good (or bad) as they were destined to become.

It was a hot summer’s Saturday night at Richelieu Park. I believe it might have been the first year that George Giguere’s innovation, the Canadian Juvenile Series for fillies was raced. There were two divisions. Each division had an Armstrong Bros-owned filly by Adios in it. Both were trained and driven by the renowned fiddler, Harold McKinley. I believe their names were Rosemary Frost and Vivian’s Adios. They both won.

I asked myself why of 16 fillies in the races, the only two sired by a horse by the name of Adios were the best.
From there on my fixation was on breeding and pedigrees. I subscribed to The Harness Horse, The Canadian Sportsman and Hoof Beats. I devoured every word in them.

Each February I looked forward to receiving the Sires and Dams book from USTA. I read it from cover to cover at least twice each spring.

There was a time when I believe I could identify the sire and dam of at least 90 per cent of the horses racing in North America; guaranteed all of them that were racing in Montreal or New York.

QUESTION OF THE WEEK

This week’s question comes from my good friend Garnet Barnsdale.

He asks: In all your travels, where have you had your five favorite steaks and ice cream, my two favorite foods?

(1) The Wagyu Rib Cap at Gordon Ramsay steak in Vegas. I’ve never had anything else there and never will. This is a cut rarely found at restaurants. It’s not very big, but it’s the tastiest and most tender piece of meat to be found.

(2) The same steak at New York Prime in Boca Raton for the same reasons.

(3) Moishes in Montreal. My first great steak and one of the very best. Everything is great. They also have a very inclusive non-steak menu. Their Monte Carlo potato is very special as is virtually everything they serve. The best sides of any steakhouse that I’ve been to.

(4) House of Chan in Toronto. Toronto’s equivalent to Moishe’s in Montreal. In addition, their Chinese food is good. The only great steakhouse where you can get Won Ton Soup or egg rolls as appetizers.

(5) Smith & Wollensky in New York. There are probably 20 or more steak joints in NYC that are as good, but S & W is the only one where you get Danny Collins the most entertaining waiter in the world to serve you.

You may wonder why Peter Luger’s isn’t included. It’s great, but no greater than 20 or more places that I’ve been to. If you were asking for the best hamburger, theirs, which is served only at lunch, is the best I’ve ever had.

(3) The gelato at a place whose name I forget near the fountains in Rome.

(4) The zero zero pistachio served aboard the Silversea Cruise Line. They claim it has zero calories and zero fat. I don’t believe them. It tastes too good for that to be true.

(5) St Aubin in Montreal. I don’t know if it still exists. It’s the place where I first found one of my all-time favorite flavors: licorice.