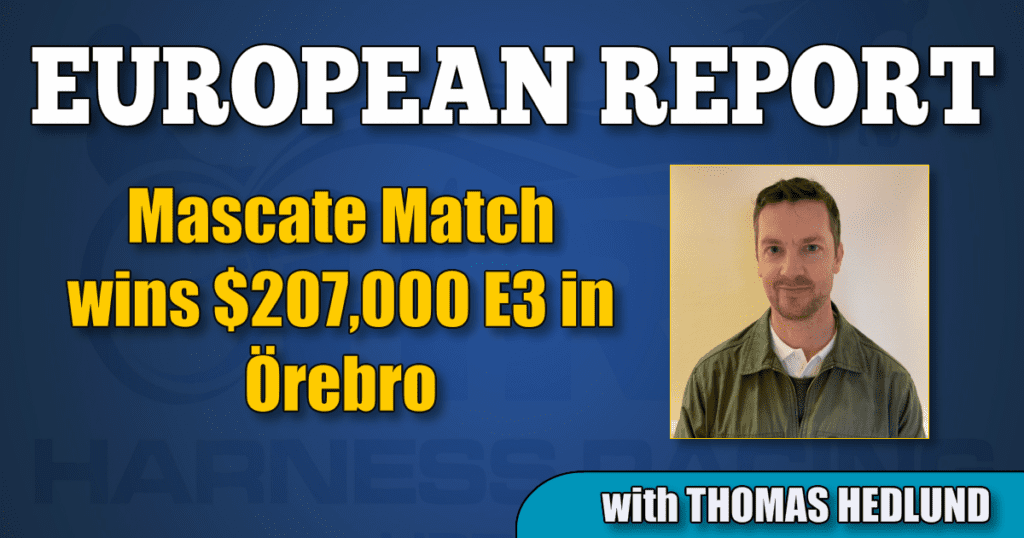 Pekka Korpi steered his Muscle Mass mare Mascate Match to a safe win in the $207,000 E3 for mares over the mile in Örebro, Sweden on Saturday afternoon.

Mascate Match early found the lead and Pekka Korpis was allowed to keep the pace down until the last turn, when first over racing Global Anarchy tried to challenge the leader. Mascate Match was, once more, superior her opponents and she came home in 1:56.2.

“She can be the best horse that I’ve ever trained. She’s very easy to handle in races and it’s always fun to win races like this,” said Korpi after the great victory.

How good is Aetos Kronos?

We will never get the answer, but it’s part of the harness racing business to speculate about and compare horses and how good they are on both sides of the Atlantic ocean.

When the $207,000 E3 final for colts and geldings was held in Örebro, Jerry Riordan’s Aetos Kronos (Bold Eagle) established who’s the best 3-year-old trotter in Sweden, and maybe even in Europe.

Aetos Kronos, partly owned by Jeff Snyder, won the first edition of the E3 earlier this summer and was in first choice position from post 3 behind the gate when the shorter division was scheduled on Saturday afternoon.

“This horse has a heart of gold and it’s rare to drive trotters that fight so much as he does. Among the best 3-year-olds in the world? I’m pretty sure that he belongs in the top of them and he’s absolutely the best 3-year-old I’ve driven,” said Untersteiner.