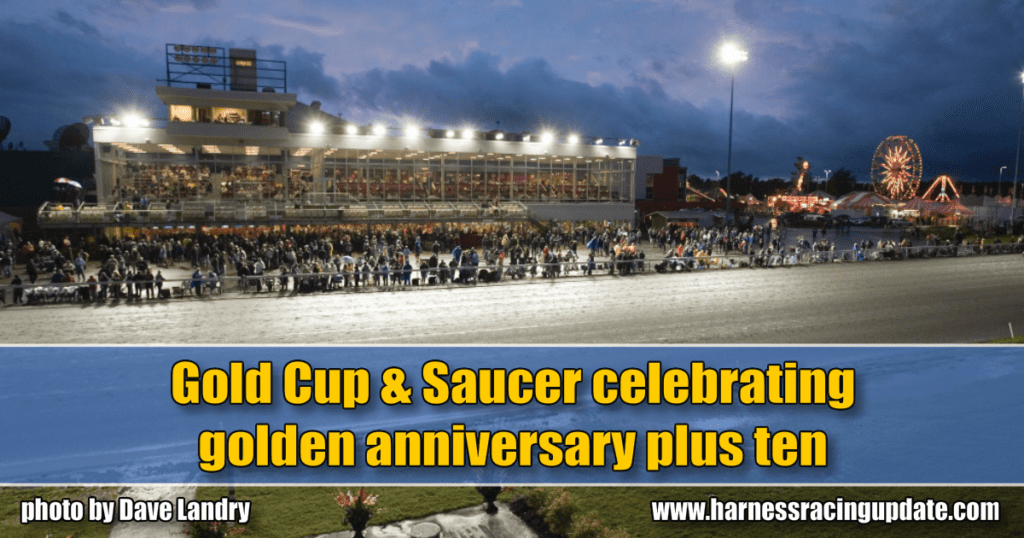 A golden anniversary is technically a 50-year anniversary, but Red Shores Charlottetown Driving Park is celebrating the 60th year of an event that is as rare and resilient as the precious metal. The 2019 Gold Cup and Saucer final is slated for Saturday night (Aug. 17), its diverse field of eight pacers assembled from the top-four finishers in the two Cup Trials.

Last Saturday evening (Aug. 10), #5 Midway Island and driver Travis Cullen battled #1 Doctor Royal (David Dowling) to the :28.1 opening quarter, grabbed the lead, and were instantly under pressure from a first-over #2 Somewhere Fancy (Marc Campbell)—the defending Gold Cup and Saucer champion. Cullen let Campbell’s horse roll to the front and accelerate to the half with a :27.3 second-quarter clocking.

As the top two turned for home, five-plus open lengths ahead of the rest, the 5-2 Midway Island confronted a tiring Somewhere Fancy and opened up by a length and a half for a mild upset. Maine’s Ron Cushing steered Bettors Fire N to an improbable show finish in the 1:52.1h mile, launching the oldest pacer in the field from post #8, ending up parked for half the race, and even surviving interference at the half when second-over behind breaker #7 Make Some Luck (Jody Jamieson). Gilles Barrieau, who was seriously injured in a driving accident at Red Shores Summerside Raceway in July, reined #4 National Debt to a fast-closing fourth-place finish.

Monday night (Aug. 12), Cup Trial #2 saw #1 Rock Diamonds N (Ron Cushing) battle #5 Brave World (Anthony MacDonald) in the early going, the latter horse getting parked out in fourth and eventually fading to last. #2 Dreamfair BJ (Travis Cullen) broke stride on the backside the first time around, just ahead of #4 Sir Pugsley (Jason Hughes), who was able to circle him and close the five-length gap to the early leaders.

Rock Diamonds N appeared in control throughout the mile, seemingly coasting for the wire, when 15-1 Sir Pugsley left the safety of the pylons to close hard from third in the stretch. The perfectly-timed move by Charlottetown’s “Blue Knight” Hughes gave Sir Pugsley the 1:52.4h victory, by a head margin. #3 Bet On Brett — fifth in last year’s Gold Cup and Saucer final — was third for driver Phil Hudon; 26-1 longshot #6 Lisburn (Ken Arsenault) was the last horse to qualify for the $60,000 Cup final.

The Cup Trial winners are both Ontario-owned horses. Sir Pugsley (p, 4,1:49.2f; $293,660) is owned by Robert F. Woodburn of St. Thomas, ON, and trained by Patrick Shepherd, son of PEI trainer Harold Shepherd. The 5-year-old American Ideal—Q And A (by Presidential Ball) stallion has been campaigning at Massachusetts’ Plainridge Park, recording back-to-back victories in 1:51f and 1:51.4f there last month.

Five-year-old Midway Island (p, 5, 1:49.4f; $235,634) arrived fresh off a lifetime-best win at Pocono on July 27. The Somebeachsomewhere—Up Front Gal (by Dragon Again) gelding is co-owned by driver Cullen and trainer Rachel Andrew, who is also Cullen’s partner. The couple live in Dundas, ON. Andrew is the daughter of respected horseman Brian Andrew, who operated Meridian Farm in Milton, PEI until he succumbed to cancer last December.

Last year’s final was contested the Sunday evening after the usual Gold Cup and Saucer date, because of heavy rain. Somewhere Fancy’s 1:50.4h victory for driver Simon Allard was a showy one, the Pennsylvania reinsman famously kicking both legs into the air as his horse maintained focus to the finish. Headlines frequently accompany Red Shores Charlottetown’s premier event, although they are not necessarily speed-related: No pacer has broken the 1:50.1 track record set by Rene Allard’s Ys Lotus and driver Louis-Philippe Roy in the 2016 edition. The mark still stands as a Canadian record for older pacing geldings on a half-mile track, shared with Rockin Ron. Lasix was first approved for use in the Maritimes that year and in 2019, every Gold Cup and Saucer finalist will race on the medication. History could also be made this year if Midway Island, Bettors Fire N, or Rock Diamonds N emerges victorious — no female trainer has yet won the Gold Cup and Saucer.

A trackside “Gold Cup reunion tent” will be part of this year’s Old Home Week festivities, welcoming past participants and fans for a meet-and-greet session complete with vintage photo and poster displays. The celebration of the 60th anniversary of the Gold Cup and Saucer is slated for 6:30 pm tonight (Aug. 16). Those who would diminish the importance of this race on account of its purse or location may want to consider its remarkable longevity, regional-high handle, and consistently-strong (paid admission) attendance. In a sport that mourns public indifference, these Red Shores are golden.