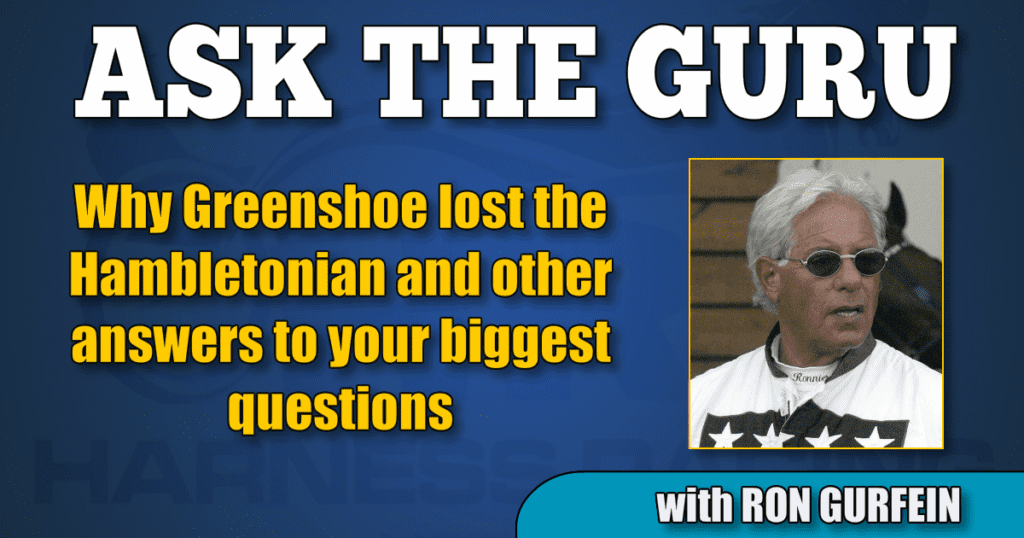 Also, how fast would Lather Up have gone if he had raced a mile, can a small owner win the Holy Grail and how do we stop beards? The Guru knows.

Tidbits: My sincere apologies to Marc Guilfoil and the entire Kentucky Racing Commission for my lack of properly investigating a statement made by George Segal involving the methods in place for insuring the integrity of racing at the Red Mile.

One of the interviews that I conducted at the Hambletonian on Saturday was with George Segal famed owner, breeder of Brittany Farms. Unfortunately due to time constraints it never made the paper. However I did use a quote of his in an anonymous way. He basically said that the reason he wasn’t sure if there would be out of competition testing was that it hadn’t been approved by the commission. I have since been put on notice by Marc Guilfoil that the commission always conducts out of competition testing and has been doing so for the past 10 years. Mr. Guilfoil said, “The KHRC has an out of competition testing regulation in effect for all breeds since 2010. The KHRC routinely performs sampling for other racing commissions when Kentucky-based horses are entered in stakes elsewhere.”

I would like to see harmony between the track and the commission in this highly important area. I personally had a run in with the Kentucky commission and found them to be tough but fair in the long run.

All factors involving drugs or other forms of cheating and all the parameters should be exactly the same from state jurisdiction to state jurisdiction. Until this happens there will constantly be new problems to deal with.

I would also like to apologize to all the people I interviewed that missed the column on Sunday. The races ran so late and I had an 8 pm deadline and to top it all off I can’t type. Therefore trying to keep up with my voice recordings was a serious problem. I promise this will never happen again as I will not ever attempt it. Thank you all for your comments and stories, I wish less had ended up on the cutting room floor.

Harley Kennedy asks: I am sure there are many reasons, but what is your theory as to why Greenshoe lost the Hambletonian? Going in I thought it was an impossibility for him to lose.

That’s why they call it horse racing. I agree with you 100 per cent. I could not fathom the possibility of him losing, myself. However in my pre-Hambletonian column I did point out that I was afraid that the three week layoff that Melander gave him may have been too much time causing him to be a little too fresh going to post. Another thing that hurt him was the detention barn. Colts that high strung don’t need new surroundings for any period of time and the lack of a paddock for all that time can be game changing.

Being too sharp was not the entire problem, $1 million and being too sharp was. Going for that kind of money there are no holes, no kindness whatsoever. The fact that the colt is basically a handful the first quarter and no one was giving him a break Brian Sears found himself in an untenable position throughout the first turn.

The colt was fractious in the first heat, but there was little action in the first turn and although Brian almost lost him twice he had room to maneuver and overcame the troubled start.

In the final, there was too much going on which compromised his position going to the half and eventually cost him the victory. Sears almost lost him a few times before the half and going for all that money I am sure he was happy to put the almost $250,000 in the bank instead of risking a mistake and forfeiting the rewards.

Brian did a miraculous job in both heats. The colt, in this writer’s opinion, is still the fastest trotter I have ever seen and Marcus Melander did a fabulous job bring him back this year after his problematic 2-year-old season.

To all you young trainers out there, there are lessons to be learned from the outcome of this year’s Hambletonian. The only colt in the final with more than a two-week layoff going in was Greenshoe. Also, there is a great piece of equipment called a Norwegian tie down. It pulls a colt’s head down from the top of his head instead of the normal under the chin type. When faced with a horse that throws his head (i.e.: Greenshoe), it is the perfect solution.

Peter McCarthy asks: I was fortunate to attend this year’s Hambletonian and found it exhilarating. I have dabbled in ownership at a much lower level. Is it possible for a small investor to find the holy grail?

I think anything is possible, however this journey seems to become more expensive every year. I certainly do not want to dismay any buyer no matter what the amount of investment is because let’s say you buy a colt for $30,000 and he isn’t capable of winning the Hambletonian, there is a ton of money out there in other venues to recoup your investment and even make a profit.

As for the big dance itself, I will enlighten you with this year’s figures. The big favorite, Greenshoe, was a $330,000 yearling purchase and as of this morning in this writer’s opinion he is worth more than 20 times that amount even in defeat. If he had won I would say most likely 30 times his purchase price or at least $10 million.

The least expensive finalist was Soul Strong at $27,000 and although his performance was exceptional his value is severely modified as he has been gelded.

Roger Weatherby asks: What is your opinion of races like the Sam McKee Memorial at a distance of 1 1⁄8 miles instead of the normal one mile events?

It is my understanding that the added distance increases the wagering handle to a large degree. I assume this is true. To me as a fan I think on many occasions it deprives the sport of records that would have otherwise been exciting. The performance of Lather Up was unreal on Saturday. It may have, arguably, been the premier performance of the day in the opinion of many of the onlookers.

It certainly was of the 1:45.4 type, previously unheard of.

All of us that were privileged to witness this great race will never know what could have been at the mile distance, and our estimates will not be printed in any record book.

To the parties that make these type decisions if you want to increase the handle by using longer distance races to mix it up, try and use less important races to raise the financial gain and have the great ones race at the standard mile.

Ann Churchill asks: After your joking reference to the great rise of Gareth Dowse and the precipitated rage of Josh Marks accusing Ray Schnittker of telling you the story, thus ending the beard relationship, what next?

Unfortunately the series of events were “the perfect storm.” Everything fell in place rather easily. The good news is the criminal activity is suspended. The bad news is as of this writing there have been no arrests, no commission punishments, not even a slap on the hand. Subsequently, I expect a new beard to be in place shortly.

This should not and cannot be permitted to happen.

Starting in 2020, any owner found writing checks to a trainer not listed on the program should be suspended. Any trainer that is observed treating a horse in an illegal manner should be exposed. You are not a rat for cleaning up the sport you are a rat for letting this treacherous activity to continue.

We shouldn’t need a lucky set of circumstances or a tough guy like Ray Schnittker to solve this problem. If you see something say something.

There are still a bunch of trainers batting too high in my estimation. I am not saying they are all guilty, but I have seen some ridiculous results. When track management and or the commissions see this go on there should be 24 hour surveillance, and then maybe we will be headed in the right direction.

Thanks again to all of you for your kind words. You all were all overwhelming at the Hambletonian last Saturday. I appreciate it very much. Please keep your questions coming in. The Dan Patch at Hoosier (with Lather Up) and the Carl Millstein at Northfield (with Bettors Wish) are coming up this weekend as well as the continuing events in the Sires Stakes eliminations at the Red Mile. Have a wonderful week.