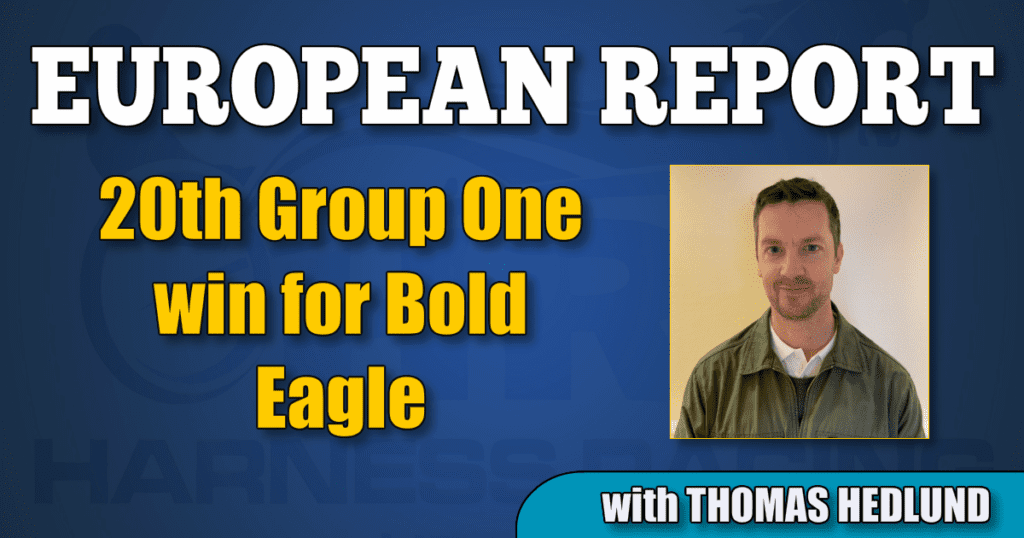 Sébastien Guarato’s 8-year-old Ready Cash son Bold Eagle won the $161,300 Grand Prix de Wallonie in Mons, Belgium on Sunday afternoon. Tony Le Beller was new driver for the great French champion and from post eight behind the car, the duo exploded to the lead, a position that Le Beller gave up after 500 meters. Bold Eagle got out of his pocket trip before the last turn and held on to victory by a neck ahead of great finishers Valokaja Hindö and Billie de Montfort.

The mile rate was 1:54.1 over 1.4 miles and this was Bold Eagle’s 20th victory in a European Group One-race.
An objective in the near future for the French champion will most probably be the $448,110 final of Masters du Trot at Vincennes in September.

Rick Ebbinge from the Netherlands captured the title as the best driver in the world when World Drivers Championship was held in Sweden earlier this summer.

On Sunday afternoon, Ebbinge caught another big trophy since he took a wire-to-wire triumph in the $180,000 German Derby for 3-year-old trotters at Mariendorf in Berlin.

Ebbinges weapon in the Derby was Ganymede son Velten von Flevo, who was sent to the lead early in the race. Italian trainer Alessandro Gocciadoro had the first choice in the race. His Juan Bros joined the leader on the outside 650 meters into the race and when the stretch approached, four horses were basically all potential winners.

Velten von Flevo held on and kept Jean Bros behind him with a nose in mile rate 1:57.2 over 1.2 miles.

The $417,000 Åby Stora Pris over 1.95 miles is scheduled at Åby racetrack on Saturday afternoon and American-bred stars Propulsion and Milligan’s School are in the field of 12 trotters.

In 2018, Åby Stora Pris changed its shape and conditions altered from being a heat race, where eight totters met in two heats over a mile, to a 1.95 miles long race. A more unusual distance for the top trotters in Sweden and Europe.

France will send merited Carat Williams to Åby and among the top contenders Makethemark, Handsome Brad and Pastore Bob are seen.