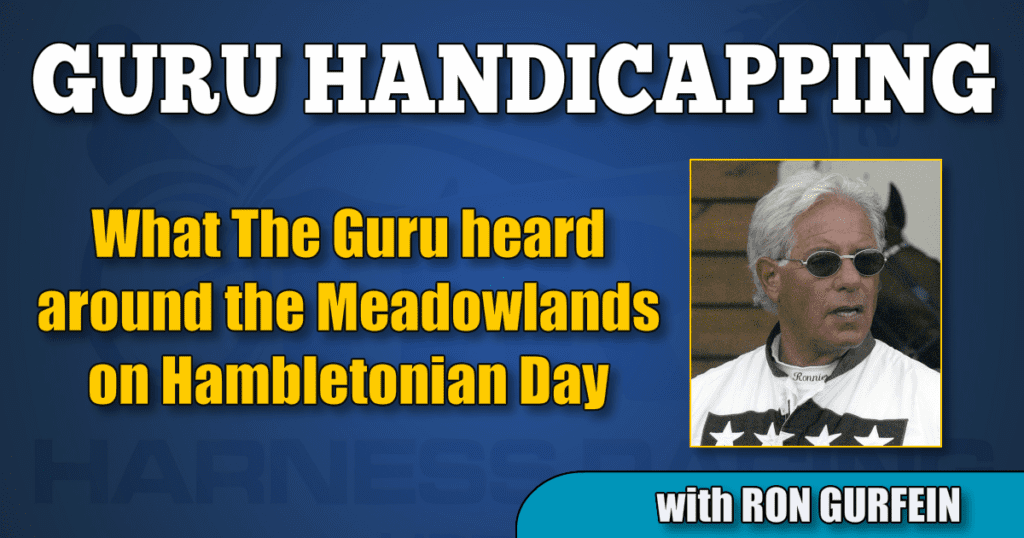 Heard around the Meadowlands on Hambletonian Day

The Hambletonian Day crowd was already filling the stands at 10:15 in the morning when I arrived. The horseman’s parking lot was near capacity. The weather was magnificent and the handle and attendance from this observer was over the top and the racing was beyond great.

I hate to be a Monday morning quarterback but I think Greenshoe was a little more on edge than usual (due to the long layoff) as I suggested previously he was too fresh. Brian Sears gets a round of applause for keeping him trotting in the first heat with a few anxious moments and in the second with many anxious moments.

I don’t want to take anything away from the winner. Luc Blais had his colt Forbidden Trade fit and ready and the Bob McClure drive was picture perfect.

Congratulations goes out to my friends Rene and Simon Allard for having their wonderful filly When Dovescry, who was above and beyond good in the Oaks. I never left the bandwagon and after seeing what turned in to an oddly-raced Hambletonian final, I am not convinced she didn’t have the ability to beat the boys on this given day.
I can’t wait to see the entire group at the Red Mile in September.

Heard around the clubhouse

Ken Jackson of Kentuckiana Farm told me some wonderful news that we are going to race for more money in Kentucky this year than we ever have in his lifetime.

“I am really excited about it, Ron. Obviously, the sires stakes program over the past few years has grown tremendously and we will race for over $5 million this year, with $30,000 eliminations and finals of $250,000 for each of the eight divisions. What really is exciting is when the new harness track opens in western Kentucky, called Oakgrove Gaming. Racing could see as much as $12 million to $15 million of new money added.”

I asked Kentuckiana’s Bob Brady if the format of eligible foals will remain as it is today or will the added money return Kentucky to the old system of indigenous foals only?

“We are actually working on an idea that will try to energize people to move their stallions back to Kentucky,” Brady said.

Can you give us any insight into some of your favorite colts and fillies that will be going to auction?

“We have 11 Muscle Hills, 14, Father Patricks, six by Captaintreacherous and a special colt named Maverick, a full brother to Greenshoe,” Brady said.

“I am positive four years ago there were only 97 horses in the (Kentucky) program,” Jackson added, “and today we have over 1,000. I mistakenly always thought it was the stallion that led the industry but I am learning that it’s the mare.”

I also had the pleasure of speaking with Dr. Bridgette Jablonsky, who was recently promoted to executive vice-president and syndicate manager of the famed Hanover Shoe Farm

How are you handling all your new responsibilities?

“I am enjoying my new role immensely,” she said. “I have always liked stallions and now being involved with the syndications and the syndicate members I find very fulfilling and I am more involved with the purchase of the broodmares. I feel that after 23 years I was ready to do a little less physical work and a little more office work, it was good timing for the transition.”

Who will show me yearlings this year?

“Who showed them to you last year? Nothing changed.”

Any new stallion prospects on the horizon for Hanover?

“We are very interested in a particular stallion, but there has be no deal made, as of yet. We are interested in Greenshoe and the owner knows we are interested in him. He is a very special horse. Sometimes I think he is pacing he goes so fast. The only horse in my lifetime that compares to him is Muscle Hill.

How about pacers, any prospects?

“The only pacer we were interested in, Captain Crunch, has been spoken for already. He will stand at Diamond Creek so the answer now is no.”

In speaking to a few from the Red Mile contingent I was sad to learn that the Kentucky Racing Commission has yet to grant permission for out-of-competition testing. In response to my seeking an understanding of why, Frank “The Elder” Antonacci said, “We own the stadium, we sell the beer, but we don’t call the balls and strikes.”

Joe Thomson, another of the principals of the Red Mile said he thinks John Campbell has been a terrific addition to the Hambletonian society.

“He has his finger on the pulse more than anyone since I have been a member,” Thomson said. “We get through the items at the meetings better and seem to have a better approach to them. I think you will see the Hambletonian Society far more active than it has been in the past. I think we made a step in the right direction going back to the elimination races the week before as it is better for the betting public and especially the European betting market. It also will be less confusing to new players without the sheet coming out after the first heats.”

Myron Bell and I talked about cheating and beards and what the tracks, owners or trainers can do to rid our business of these problems.

“I think Ray Schnittker said it all,” Bell said. “He was the first trainer/driver to speak up. We need 10 more Ray Schnittkers. I sent Ray a nice note and thanked him for his honesty and integrity. Our industry is a great business and we have a great product, if people want to cheat there is no room for them in this industry. The solution to the problems is up to the owners. They control the money, follow the money if they are supporting beards which they know they are then shame on them. I believe if you get quality horses and give them to quality trainers you have the opportunity to enjoy this sport.”

Bell also updated me on his group of 2-year-olds.

“We have a few Captaintreacherous fillies and colts that are trained by Tony Alagne who has done a magnificent job. It’s too early to tell, let’s wait until after Lexington,” he said.

You had a lot of nice 3-year-old pacers in Florida this winter. What is the reason we don’t see any Captains in the Cane Pace today?

“Our best colt training back was a colt called Captain Ahab and he got sick. As a matter of fact, he is qualifying in Lexington this evening. Hopefully he will retain his top form for the remainder of the year. We do have about five other 3-year-old colts that are racing very well at different venues around the country, they are all very good colts but not great colts.”

I sincerely apologize for omitting some of my interviews and sending parts to the cutting room floor. I have never attempted this type of reporting before and didn’t realize how difficult it was to type a recorded interview when you can’t type. Please forgive me, my time constraints were restraining. I will use the others in my Ask the Guru column at a later date. The interviews I omitted were worth saving.