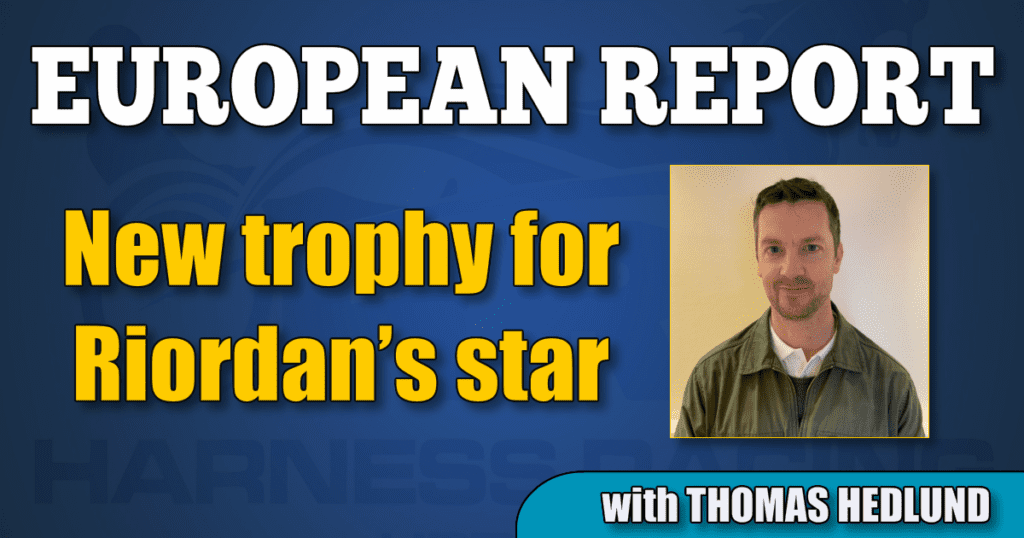 Jerry Riordan’s Ringostarr Treb (Classic Photo) ended his 2018 season with two off stride performances, the last one in International Trot at Yonkers in October.

Now, the 9-year-old Elitloppet winner is back for real and on Tuesday night he won the $333,500 Hugo Åbergs Memorial at Jägersro racetrack in Malmö, Sweden.

Paired with German driver Wim Paal, Ringostarr Treb opened quickly from post one behind the gate and the duo seemed to keep the front position, until Uza Josselyn challenged on the outside in the first turn. Paal had to surrender and Uza Josselyn was in the lead when the first 500 meters was reached in mile rate 1:45.2.

Ringostarr Treb followed in perfect spot behind the French leader, but the tough opening should have made Riordan’s trotter more or less out of the game.

The son of Classic Photo left his position at the back stretch and Paal trusted his horse when Ringostarr Treb had to race without cover during the race’s last 650 meters. In the home stretch, the duo got control of the race and left their opponents with a couple of lengths.

It seemed like Ringostarr Treb would capture this trophy quite easily, but, obviously, his power started to fade from fourth over as Propulsion rapidly accelerated far outside. Propulsion was late on it and could never catch Ringostarr Treb when the wire approached.

Riordan can now look back at three straight years that Ringostarr Treb has won a big stakes race in Sweden. In 2017, he captured the $208,000 Sundsvall Open Trot and in 2018 the Elitloppet went to Riordan and his champion trotter.

“It’s been a while since he won the Elitlopp and he has had his physical problems since then. Last winter the horse was in Italy for breeding business and the owner called me and said that he was ready for training again, and he was right. Ringostarr Treb is a small guy, but acts like a Jack Russell terrier on the track. He doesn’t care about the size of his opponents,” said Riordan.

Ringostarr Treb was supposed to race in Finland in June last year, just after the victory in Elitloppet, but when he arrived in Finland it turned out that the horse was affected by an infection in a joint and he had to rest during the summer. The fact that he now, as a 9-year-old, can make such a comeback at the track is nothing more than spectacular and, in some ways, significant for Swedish harness racing. Big money can be earned even if a horse has been in the game for a long time.

Propulsion, who chased his fourth consecutive win in the race, finished second ahead of Pastore Bob.

The race card at Jägersro contained more diamonds than just the Hugo Åbergs Memorial. In the $125,000 Breeders Course final for 3-year-olds, Alessandro Gocciadoro’s Acciaio (Love You) came to the lead after 500 meters and driver Örjan Kihlström had everything under control when the field of eight horses turned for home. Acciaio sprinted to safe win in 1:54.4 ahead of first over racing Ubiquarian Face and Arden Wise As.

Riordan had one more winner on this night. In the $41,500 Prix Cagnes-sur-Mer for 4-year-olds, American-bred Classichap (Chapter Seven) flew to the front for driver Thomas Uhrberg and when five out of nine contenders disappeared by going off stride, the victory was quite safe in 1:53.1.

This was the first victory for Classichap since he came to Sweden. Last year, the 4-year-old son of Chapter Seven finished 7th in the final of Hambletonian for trainer Trond Smedshammer.

In the $41,500 Stoeliten for mares, Donato Hanover mare Double Exposure scored, what seemed to be a penalty kick from three meters, from the lead and Daniel Redén’s 6-year-old came home in 1:54.2.