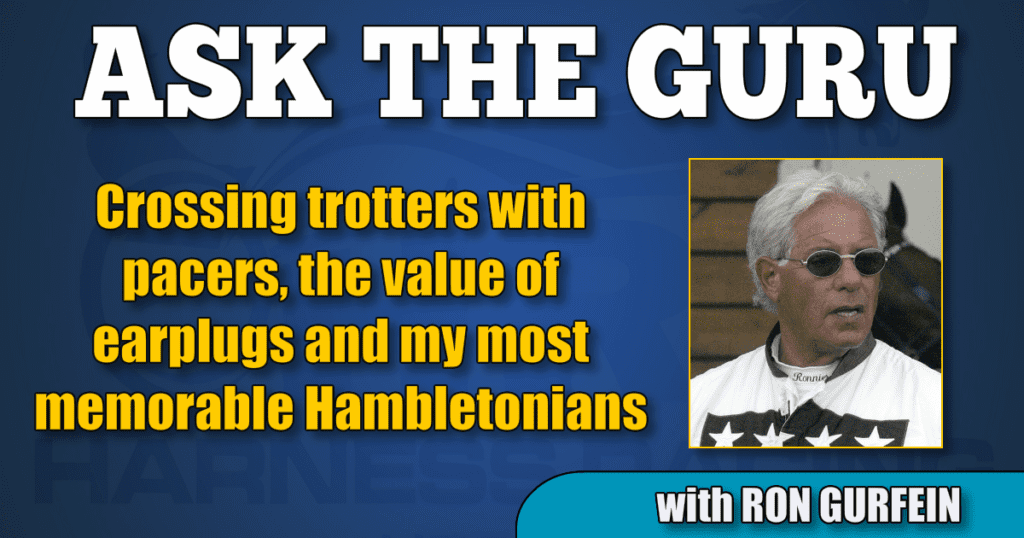 Crossing trotters with pacers, the value of earplugs and my most memorable Hambletonians

Tidbits: This weekend makes it all worthwhile. Usually a prohibitive favorite in the Hambletonian makes for less excitement and a shorter field. Neither of which seems to be the case this year. I have received so many emails in regards to what — till he proves otherwise — I will nickname “the Wonderhorse of my era.” People were not concerned as to the outcome of the race as to the performance of Greenshoe. However, with just a week to go, the Green Hornet (Yannick Gingras), who I was certain would be Melander’s choice to drive his undefeated Gimpanzee, went a miracle mile in the Reynolds with Team Johansson’s Don’t Let’Em stopping the teletimer in 1:50.2 after being parked the entire mile and winning by five lengths.

I have had the pleasure of sitting behind some of the greatest horses that ever lived and had many head scratchers but none compare to the ups and downs of this colt.

Looking back to my 12 editions of the Guru’s Road To The Hambletonian it seems that every week I was saying what a great job Nancy Johansson did turning this colt around only to reverse myself the following week and declare Nancy has to go back to the drawing board. If the obviously very talented colt can repeat that effort in his next two races he could well make the race a whole lot more interesting than I thought 10 days ago.

Do I think Don’t Let’Em has a chance to beat Greenshoe? Absolutely NOT…..

His high speed could create a scenario that would cause Greenshoe to trash the Hambletonian record with a sub-1:50 effort.

If you look elsewhere in this issue you will find my in depth handicapping of both the Hambletonian and the Oaks. GOOD LUCK!!!!

How’s this for a Harness Racing Update? Since the timely demise of team Josh Marks/Gareth Dowse, Thanks in part to my friend Ray Schnittker, the horses have been dispersed to a variety of new trainers. I have taken note that some of these horses have actually improved in their new surroundings. Change of scenery must be the only logical answer. Stay tuned, this could get interesting.

Congratulations to my friend Steve Starr announcing his retirement after almost half a century as racing secretary at Yonkers Raceway. In all my years racing there I always knew how I would be received when I walked through the doors of your office. You truly made life easier for many horseman. Enjoy your new life.

Andreas Jonsson (from Sweden) asks: How big a success has it been to cross trotting/pacing mares with trotting/pacing stallions. I know about Googoo Gaaga. But how difficult is it to succeed with this cross?

Today, it would be like being hit by lightning, not because it couldn’t work but the speed of today’s competitive trotter is derived from expensive blood. The champions all come from sires with high price tags, therefore it would be unusual to find a breeder that would experiment with a pacing mare on a big ticket stallion.

Back in “the day” it wasn’t an everyday happening, but it was far more evident. I remember John Patterson Sr. had an Overtrick mare named Trickery, she had some nice trotters. Keystone Sandal had Sandy Bowl. Glad Rags (Greentree Adios) had the great Swedish stallion Zoot Suit. In the reverse direction, La Pomme Soufflé was a Nevele Pride that had the good pacer French Chef. Doe Hanover had pacer Egyptian Pride and trotter Egyptian Candor. Sir Dalrae was a top pacer by the trotting sire Porterhouse. One of the foundation mares The Old Maid could throw either gait.

Speed is definitely the answer as to why this phenomenon no longer exists. In the time that these crosses existed, pacers were going in 1:57and trotters 2:00. It was easier then.

I trained a Tar Heel filly out of Sara Black for Lew Williams one winter till she had been around 2:07 and finally put the hopples on her.

My thanks to Bob Marks. Without his expertise I never would have tackled this question.

Frank Black asks: I asked the USTA to look into a particular race where the driver looked like he was kicking the horse. I was told that the driver was pulling the earplugs can you explain?

Earplugs are used to keep a horse calm in the post parade and going to the gate. When they are pulled the outside noise returns and supposedly give the horse a green light to go on. The plugs are either cotton or sponge and are attached to a string. The string is threaded through the harness and back to the driver where it is attached to either the handhold or the bike, a driver’s preference. Most prefer the bike where they can lift their foot out of the stirrup and pull the plugs without using their hands. There is a big difference in the foot action of kicking and pulling the plugs. When a driver pulls the plugs his foot goes straight up in the air not pointed in any way toward the horse. When a driver kicks a horse it is much less evident as he will drop a leg and kick a hock (hind knee) or some part lower down as to not be seen by the judges. With the plethora of fines being handed out the amount of kicking has diminished a lot in recent times.

Paul George asks: You have been in the sport for a very long time. What are the most memorable Hambletonians you have seen?

I have seen almost every Hambletonian since Nevele Pride and to me they were all memorable. Being a part of the race history myself I am a bit prejudiced. I loved the dominant performances of Muscle Hill and Self Possessed, and the dead heat of Park Avenue Joe and Probe was truly exciting. Being petrified as Victory Dream went behind the gate in 1994, and going on to win my first Hambletonian was truly memorable.

However, the one that tops them all, not just in my mind but in the minds of most of the onlookers that hot August afternoon in 1996, was the stretch drive of Continentalvictory and Lindy Lane. The two best horses and two top drivers (Michel Lachance, and Bill O’Donnell) head and head, toe to toe the entire length of the long, long, long, Meadowlands stretch was a heart stopper. How my heart didn’t give out is a question I ask myself often. People always ask me if I thought I was going to win at the top of the stretch and my answer was surely no. But as they got closer to the finish line my hopes became stronger with every stride as the filly was holding firm. Could she sustain it to the finish with her beautiful black tail in the air almost waving at the crowd going by? Yes she did, and to my amazement I survived that hundred and twelve seconds to talk about it.

Thanks to all of you for your kind words. You encouraging notes are what keeps me going. Please don’t take the Meadowlands intermission in racing to think everything stops. The Grand Circuit moves west and south. The Red Mile meet is already under way and a visit to Lexington, I promise will serve you well. Please keep the questions coming in because without them I am out of work. Enjoy the big weekend of racing and have a wonderful week.