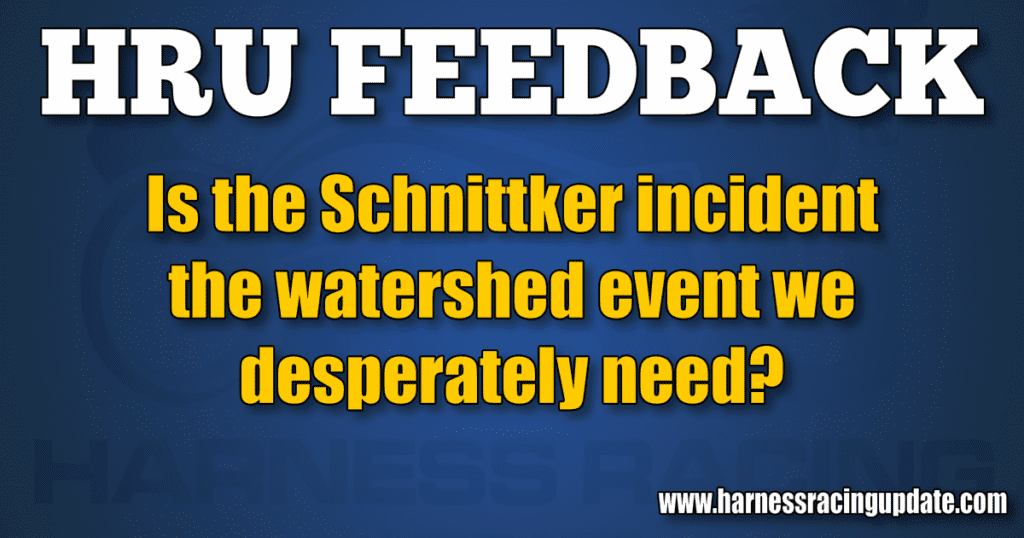 Is the Schnittker incident the watershed event we desperately need?

Is “The Pocono Downs Incident” the watershed event we so desperately require or as Yogi said, “Déjà Vu all over again?”

For the few that have not read or heard about “The Pocono Downs Incident” it occurred on July 8 (full story here). Ray Schnittker won the 12th race and upon entering the winners circle was the target of an unwarranted and vile reproach from an individual in the grandstand, a former trainer whose license was revoked in 2011. Security was called to address the matter. This unlicensed trainer has participated for years naming licensed individuals as trainer of record to circumvent his license revocation. Harness racing needs this event to be a turning point that motivates us to institute policies to address our integrity issues.

There have been thousands of miles traveled and as many words spoken at hundreds of meetings, conferences, ad-hock committees and in the media, all dealing with our major concern… the serious lack of progress our regulators have made in addressing racing’s enduring integrity issues. The Association of Racing Commissioners International (ARCI) has a noble yet arduous challenge to establish one set of rules for universal application. The association does indeed formulate rules that in many instances the commissioners are unable to implement when they return to their own jurisdictions. The fractious nature of our business makes it near impossible to reach a consensus on any issue. Our conflicting individual agendas and our inability to formulate a unified effort especially regarding integrity will ensure our demise.

In 1953, one of the first pari-mutuel racing regulatory commissions was established not to regulate horsemen but to address political corruption at the state’s harness tracks. Elected officials had major ownership shares in the racetracks before the pari-mutuel licenses were issued. The value of these ownership interests subsequently increased generating windfalls for the politicians. The scandal was the motivating factor in the Governor initiating an investigation/commission as the politicians scrambled to hide ownership interest.

Today, the jurisdictional bureaucratic staffing/appointment process in many instances create ineffective racing commissions by appointing for the most part unqualified individuals. These individuals that regulate our livelihoods have little interest in proactively addressing racings issues but merely taking a reactive approach hoping that the matter will rear its head, attract little media attention and go away. This attitude in many instances flows downhill to the judges and stewards who cannot consistently count on the support of their commissioners and executive directors. The tentative nature of their employment has been evident in recent years. Hence, at present, I do not believe you will find any judges that will concur. This has become more of a concern in the last 15 years. Racetrack owners indicate many of today’s judges responsible for establishing an atmosphere of integrity no longer call horsemen to address potential issues during a race. Many do not post inquiries unless there is an objection. This laissez faire approach contributes greatly to out poor public perception.

This inherent regulatory dysfunction is the key reason major integrity issues such as beard trainers has never been resolved. I was asked at a meeting two years ago, to comment on some of the major issues facing harness racing… noted was allowing repeat offenders serving lengthy suspensions for serious integrity violations to falsely list a beard trainer or employee on their entries. The penalized trainer never misses a day, it`s business as usual and you can be sure that the specific integrity violation has been replaced by another. An additional concern is how the integrity of the actual race is potentially compromised.

With commission support there are ways for presiding judges to monitor the trainers. The most direct being requesting stable accounts and invoices — follow the money. Additionally, work with the race secretary, who is calling in the entries, call the owner listed on the purse check, question the trainer calling in the driver assignments as well as the drivers and talk to the individuals shipping the horses. All effective deterrents not possible without commission support. Legitimate trainers burn when horses are shipped in on trailers with the suspended trainers name painted on the side and his employees caring for them. When these horses win or a trainer with multiple beard trainers has two or three in the same race the trainers and owners are one step closer to leaving the business. Unfortunately, many have.

Two ways to address this problem in the short term… in recent weeks several prominent owners removed their horses from this fraudulent trainer’s barn.

Horse owners seeking out these suspended trainers exacerbate the problem. They themselves are compromising the integrity of racing when utilizing these miscreant individuals. It would be a major step forward if these owners many of whom are known moved their stock to legitimate barns.

An alternative is for the racetrack owners to utilize their court tested authority to exclude in writing any individual whose participation is deemed not in the best interest of the facility. Presently, these fraudulent trainers and their minions have no reason to fear the racing commissions. An integrity policy based on this premise was instituted at Tioga and Vernon. The policy requirement was included in the racing and stall applications. There were several trainers denied when after due diligence it was determined that they were not responsible for the care and welfare of the horses on their application. A very important factor in implementing this policy is to absolutely ensure consistent, equitable and fair treatment of all horsemen. A group of experienced, trusted industry executives could provide background information on an individual basis upon request for the racetrack owners consideration.

I stated in Blood Horse and Harness Racing Update articles in 2006 and 2016 that if all racetrack owners decided to utilize their rights of application review and exclusion on January 1 our public perception rating and level of integrity would move into positive territory. January 1, 2020 is our new target date. This effort will require deliberation, an unprecedented unified effort, tough decisions and the fortitude to follow through if we are reverse our course.

Will “The Pocono Downs Incident” be a watershed event that leads to commissions enforcing the rules along with track management instituting new policies to rectify our integrity issues or will “Déjà Vu all over again” persist?

Brett Sturman has a lot of intelligent things to say, but his article in the July 19 HRU edition on disqualifications (full story here) was not among them.

Yes, we can all agree that judging horse racing is difficult and subjective. So is judging gymnastics, figure skating and Miss America. But saying that interference DQs should be eliminated is not only ill-advised, it would invite recklessness at a time when equine safety is coming under intense scrutiny. Fines and suspensions should be additionally levied but are no substitute for DQs.

I also strongly disagree with Sturman’s opinion that Custom Cantab did not cause interference in the Hambletonian Maturity (race 7, 13-Jul, Big M). Custom Cantab, driven by David Miller, bulled out and practically trotted sideways in the stretch, causing a chain reaction of interference to several other horses. Sturman asserts that Brian Sears, driver of Phaetosive, was actually to blame, when all Sears did was steer away from a possible collision.

Sturman goes on to say that 58-1 longshot Phaetosive’s “race was done already” at the point of interference. Firstly, the fact that he was 58-1 is completely irrelevant. Second, maybe Phaetosive was in fact toast, but can we fault him for veering away from another horse swerving into his path at high speed? And finally, asking judges to make the determination as to when a horse’s race is “done already” places an impossible burden on an already difficult job.

Every week through publications and social media, there are plenty of problems with harness racing addressed. However, one of the biggest issues holding back the industry is rarely touched and that is the stranglehold that Roberts Communications has on this sport.

Roberts Communications is the company who holds a monopoly on the distribution of racing signals in this country. Our sport long ago made a deal with the devil to pay every year for their signal distribution service and it has completely screwed us in so many ways.

Recently, Roberts Communications forced the widely popular and not for profit Harness Racing Replays page on Facebook to remove all the replays they had been sharing for the good of the sport. This page did nothing besides help keep our sport constantly in the Facebook news feed which is good for all parties involved including Roberts Comms. This is not the first time they have done this. A man from the Netherlands used to have a YouTube page with every stake and open class for several years able to be searched and shared. He did this as a fan of the sport and received nothing in terms of financial gain. Roberts took down all of his videos simply because they insist upon shielding all of the video feeds they own behind a paywall which simply adds to the several factors shrinking the reach of this sport.

Roberts is the reason the USTA cannot share replays on their website every day of significant races. They are unwilling to work out a deal to allow something so vital for the sport.

At the next USTA directors meeting, the number one issue that should be addressed is setting a plan in place to either break away from this company who has no desire to promote or innovate the broadcast of this sport whatsoever or to at least be firm in negotiating a deal with them to allow the sharing of replays across the Internet.

I implore anyone in a position of power to take a stand against Roberts and their insistence on stopping harness racing from moving forward in terms of social media and broadcast innovation. They are quietly choking away this sport’s ability to reach a wider audience while other sports bend over backwards to get video content on all platforms every day.