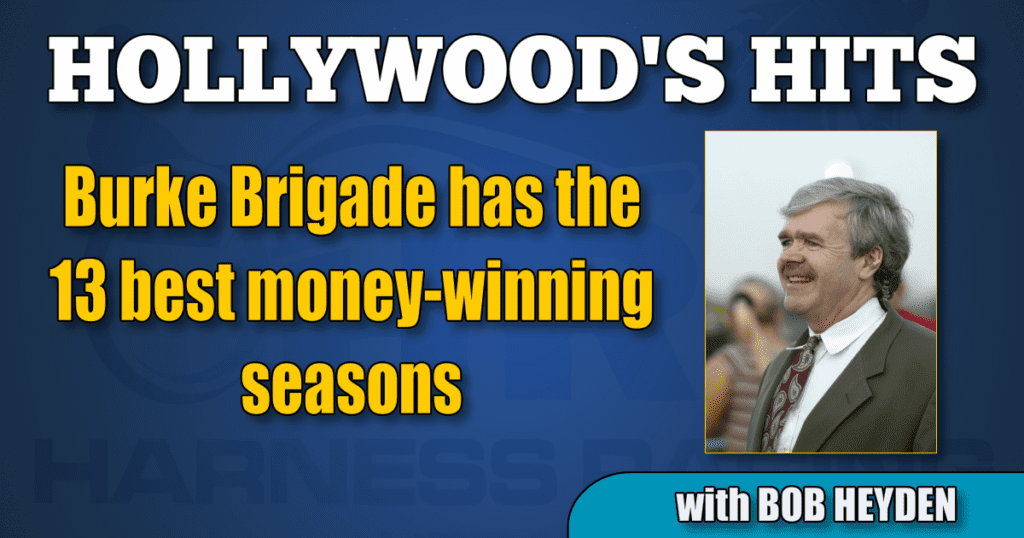 Now that Ron Burke has reached 10,000 career training wins, his next milestone is reaching $10 million on the year, which may come on Hambletonian Day.

The 13 biggest money-winning seasons of all-time (USTA) are from a Burke — 11 from Ron and 2 from Mickey, Sr.

Jumping off an undefeated colt?

There’s a possibility that a driver will take OFF an undefeated, Breeders Crown-winning divisional winner (Gimpanzee) for another colt. This reminds us of 2000-2001-when the outstanding Spellbound Hanover — winning at near 80 per cent — saw John Campbell switch from her to Syrinx Hanover, who just so happened to go undefeated in 2001 (12-for-12) and was the Horse of the Year runnerup.

Four Hambletonian winners still at it

For those new to the sport, here’s a look back — and for some a refresher course — on some of the standouts that were trained and driven by new Hall Of Famer nominee Bill Popfinger.

He was the winner of the 1978 Little Brown Jug with Happy Escort — and remember that HOY Abercrombie was in there.

He was the driver of Happy Motoring— a top colt who sired, from his first crop, On The Road Again.

He also drove a solid performer named Good To See You.

His richest trotting filly was Spellbound Hanover, who won just under $1 million for owner Bill Mulligan-and had the misfortune of being born the same year as Syrinx Hanover. She is the dam of the richest Triple Crown winner of all time in standardbred history — Marion Marauder.