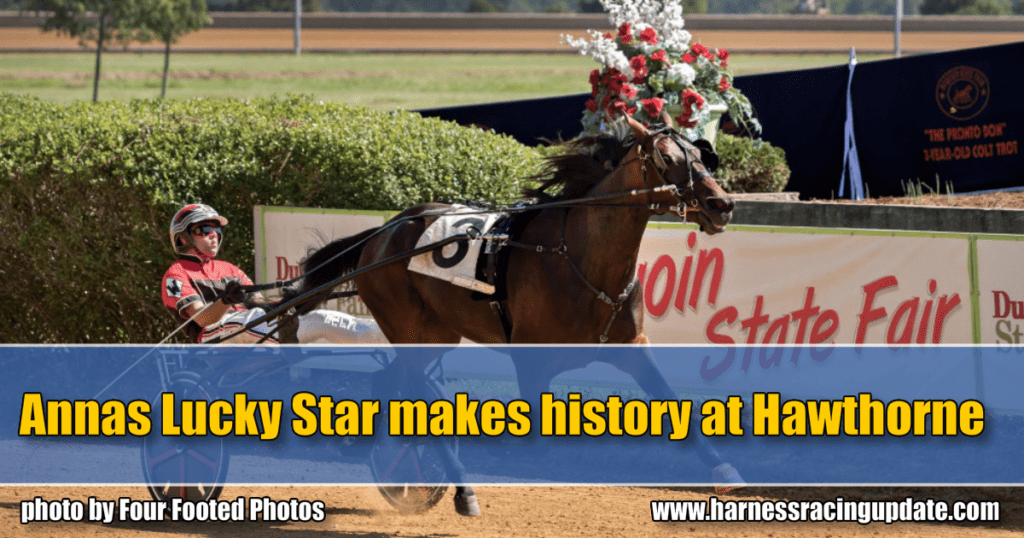 Annas Lucky Star etched her name into the Hawthorne history books on July 14 when she set the track record for older trotting mares with a 1:53.4 victory versus the boys for 75-year-old trainer Nelson Willis.

Hawthorne Race Course opened on May 20, 1891, making it the fifth oldest thoroughbred track in North America, but it wasn’t until April 14, 1970 that the sulkies made their first appearance, making it the sixth harness track operating in the Chicago metropolitan area.

A few times over the years Hawthorne discontinued harness racing, but the sport returned in 2016 when it became the only standardbred venue in the metropolitan area following the closing of Maywood Park and Balmoral Park.

A 5-year-old mare named Annas Lucky Star trotted into the 128-year-old track’s history books on July 14 when she took sole possession of the track record for an older trotting mare by making a powerful move in the stretch to catch Pine Dream at the wire and win the $12,000 open race by a nose in 1:53.4.

The old record of 1:54.1 was set by Spiralcrunznsarah in 2002 and equaled by Annas Lucky Star on May 25 when she bested the 7-year-old gelding Pine Dream by three quarters of a length.

Competing in open company races against male opponents has become the norm for the Illinois-bred Annas Lucky Star, who got the best of six of the boys when she broke the record.

The race in which she broke the track record was her fourth in eight starts victory this year and the 28th of a 50-race career in which she has finished worse than third only nine times.

“I started racing her against the boys when she was a 4-year-old and around here she’s very competitive,” trainer Nelson Willis said of the daughter of Cassis and Queen Jamie, who is owned by his nephew, Danny Graham. “She has won at Hawthorne (multiple times) and she has won at the State Fairs at Springfield and DuQuoin.”

Last year, Annas Lucky Star won at Springfield in a career best 1:53.1, and the trainer who will turn 76 on Aug. 22 has high hopes she can better that mark by a couple ticks when she returns for the four-day State Fair meeting that will begin Aug. 9 and end Aug. 15.

“For breeding purposes, Danny would like to see her go better than 1:53,” he said. “I think she can do that at Springfield if somebody will do a little bit of work for us on the front end.”

Although Annas Lucky Star has been excelling in coming from off the pace the past two years, her driver, Kyle Wilfong, pointed out “as a 2-year-old and 3-year-old she raced on the front end pretty consistently” in winning all six of her races in her first year on the track and nine of 15 in her second.

“As a 2-year-old, she stood out,” Willis said. “When you’ve got one that good you might as well be on the front end so the others are out of the way. As they get older and are no longer in with Illinois-breds and the horses are closer together you’ve got to change your strategy.”

“As she has gotten older she has been relaxing more,” said Wilfong, who has been in the bike behind Annas Lucky Star throughout her career. “She wants to pass horses. I think she can sprint (down the stretch) with hobble pacers. Her last quarters are in :26 and change pretty consistently.

“Since Day 1 we knew she was going to be special. Nelson has done an amazing job with her. She has never disappointed me.”

Willis considers Annas Lucky Star to be the best of the 23 horses—“some Indiana-breds, some Illinois-breds”—that he has at Sawgrass Farms Training Center near the site of now-defunct Balmoral.

Going into the start of the racing week on Thursday he and Mike Brink were tied for second place in the Hawthorne trainer standings with 18 victories apiece, while defending champion Terry Leonard, had a wide lead with 36. However, Leonard had 132 starters and Brink had 127 whereas Willis had 98.

Willis won multiple training titles during the final 10 years of racing at Balmoral, including the championship at the 2015 meeting that brought down the curtain.

Success followed him to Hawthorne where he won the 2016 title when racing resumed there.

Although Nelson Willis isn’t well-known nationally he has long been considered one of the foremost trainers in Illinois. In 2006 Nelson was inducted into the Illinois Harness Horsemen’s Hall of Fame, joining his older brother, Connel Willis, a 1987 inductee.

Now retired at age 85, Connel was considered a virtuoso in the fine art of training trotters. The most noteworthy of Connel’s horses were two Illinois Harness Horsemen’s Hall of Fame inductees: Gumcorner Lad, a trotting sensation in the 1990s, and Taurus Bomber, a pacer who excelled in the 1970s.

“Connel had a lot of good trotters,” Nelson said. “I haven’t had that many. This one (Annas Lucky Star) is one of my best.”

Like his older brother, Nelson got his start as a driver/trainer on the Illinois county fair circuit.

“I’ve been messing around horses since I was 15 and I started racing at the fairs when I was 18,” he said. “I won my first pari-mutuel race at Sportsman’s Park (when it was one of North America’s foremost harness tracks).

Older brother Connel continued driving into his 70s and figured in a race that turned out to be one for the books in the summer of 2006 at the county fair in Albion, IL. The victorious Winsome Wyoming had 91-year-old Leon Burns in the sulky and 72-year-old Connel was at the reins of second place finisher Gumcorner Flo.

Although there was no betting on the race in Illinois racing lore it is hailed as “the 163-year-old exacta.”