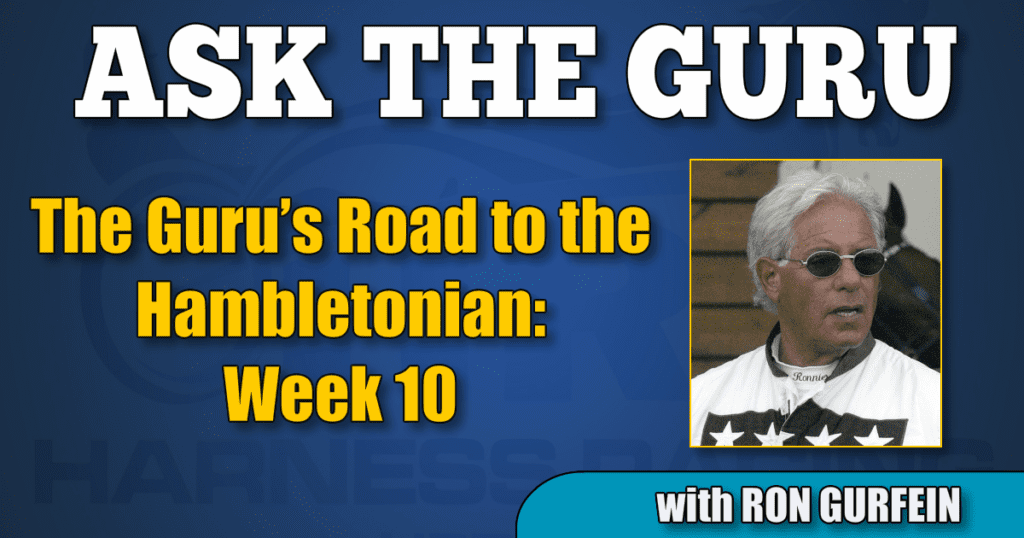 The Guru’s Road to the Hambletonian – Week 10

In what may have been his most impressive race yet, he was beaten by Marseille after a cagey drive by Ake Svanstedt in the final of the Beal. Was loaded with trot coming from an impossible spot. Remains the choice of this writer by a large margin. Had the week off in preparation for next week’s Stanley Dancer eliminations. Had last week off. If there were any non-believer out there I doubt there are any tody. Greenshoe absolutely crushed the competition in a 1:50.1 romp in his Dancer elimination last night. Truly amazing colt.

Moved up off a stunning win in the Goodtimes final at Woodbine Mohawk. Qualified at the Meadowlands in what I expect was a prep for next week’s Stanley Dancer eliminations, and what should be a showdown with the top pick and his stablemates. The qualifier could not have been better (1:51.3). He is ready for the Green Team. Raced well in defeat to Greenshoe but was NO MATCH.

Lost no points in my book after a fine third-place finish in the Beal, also coming from an impossible place. I would think the week off before the Dancer was a smart decision.

Did not race this week as Melander kept him out of the Dancer most likely for a Sires Stakes event next Friday at Tioga Downs.

He crushed a field of open 3-year-olds Friday at Mohawk in a pedestrian 1:54. Colt was a very creditable second to Pilot Discretion in the Goodtimes Final at Mohawk. Won a Ontario Sires Stake for $80k Monday in 1:53 last quarter in a quick :26.3.

Wins his first race outside the state of Indiana with a very impressive win over Green Manalishi coming first up in the Stanley Dancer first division. That’s the good news. Unfortunately, it was a case of first-time Lasix, which was a brilliant addition to a colt that had difficulty finishing his miles all season. The use of Lasix is not permitted in the rules for the Hambletonian so I would question first if he would even be an entry and then would he be competitive without the drug? One thing is for certain, it’s good Ronnie solved the puzzle as this colt was a very expensive purchase.

Raced in a NW7 at the Meadowlands and looked fabulous destroying the overnight field in 1:51.3. It looks to this writer that Nancy has found the keys and this guy is well on the comeback trail. The colt put in a wonderful qualifier finishing a very fast closing second to Pilot Discretion at the Meadowlands in 1:51.3 last week. Sat a perfect trip last night in his elimination of the Dancer and made a break trying to keep up. It’s been a bumpy road for this talented colt.

Look fabulous in her first appearance of 2019 running away from a group in a Pocono qualifier. Still has a lot of catching up to do. She is in to go tonight in a NW 7 event at Pocono.

Undefeated very talented lass has won all three starts this year. The final of the New Jersey Sires Stakes was a whopper. Raced last week off a 36-day lay-off at the Meadowlands in a division of the Reynolds. She won a division of the Delvin Miller last night handily in 1:52.3. The chart makes it look closer than it was as Tim Tetrick and Cloud Nine Fashion made a furious charge to go head and head and appeared to take the lead, but off pedestrian fractions. The end result was never in doubt.

Upset winner of the Beal last weekend. Ake likes to win big races with horses no one can figure. This colt has won the most money of any 3-year-old this year. Do I think he is as fast as the top picks? Certainly not, but as I said I have seen Ake miracles before and right now the colt deserves a spot on the list. He is not eligible to the Dancer which means he will need another start somewhere before the big dance.