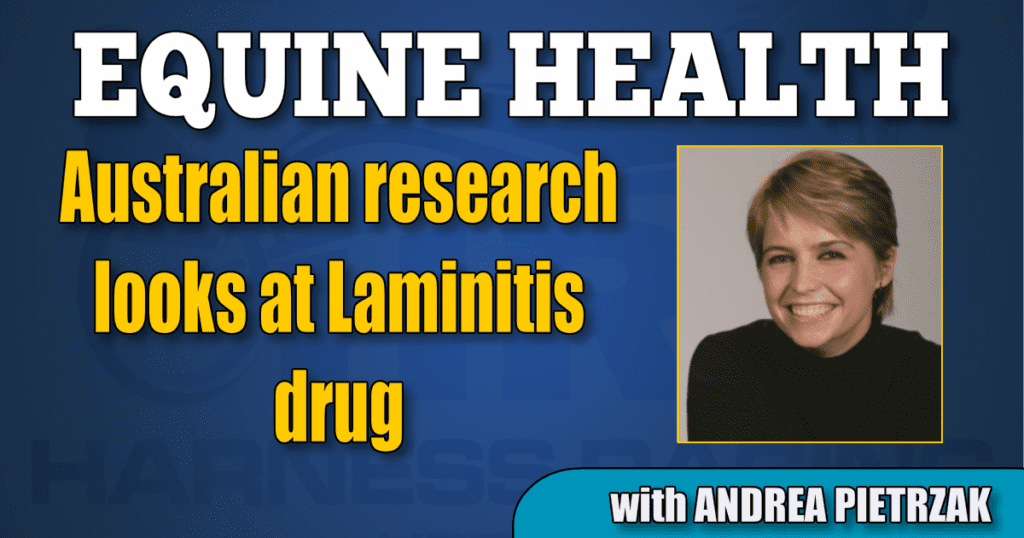 Laminitis isn’t usually associated with athletic racehorses in their prime.

Often laminitis hits geriatrics — old campaigners with swayed backs, pot bellies and thick winter coats that take forever to shed suddenly come up dead lame and rocked back off their front feet. Their immobility and severe pain usually spell a quick end to a long life.

Or else it’s a problem for pampered ponies. The rotund fuzz-balls, knee deep in pasture and plied with so many sweet treats that their stomachs can only be spanned by a horse-sized girth, seem to have recurring foot-soreness and ridged hoof growth, but carry on for months or years before crippling and life-ending lameness sets in.

However, research has shown that racing horses are also at risk of developing laminitis due to the high-energy rations needed to achieve optimum performance. So too, are broodmares and stallions that consume rich pastures or high levels of grain in order to maintain breeding weight.

Although the elderly and obese are more prone to the condition, performance horses in their prime can also be affected, making laminitis the second biggest killer of domesticated horses of all breeds and ages.

Laminitis is a painful condition characterized by feet that are hot to the touch, muscle stiffness, a reluctance to move, and a ‘saw horse’ stance where the front and hind limbs are extended outward past the line of body.

There are actually two types laminitis which result in differences of onset and severity.

Inflammatory laminitis is the result of an organ inflammation such as colitis (intestinal inflammation) or metritis (uterine inflammation). This type of laminitis is sudden and acute. Onset usually presents with severe pain, and a definite increase in the pulse in the digital artery above the hoof. There is also a noticeable spike in temperature in the affected feet.

Within a short period of time, changes to the foot will develop with the outer hoof wall becoming uneven or ringed. The sole of the foot will flatten or become convex, and the outer layer of the hoof will separate from the inner white line – creating a noticeable cavity or trench along the underside of the toe and lateral sides of the foot.

Internally, the inflammation and irritation of the vessels and tissues of the foot allows the coffin bone to rotate away from the hoof wall. This rotation is irreversible and will lead to the coffin bone dropping through the sole of the foot.

Endocrinopathic, or endocrine-related laminitis is connected with a hormonal disease like equine metabolic syndrome or Cushing’s disease (PPID). Cushing is the disease commonly associate with geriatric symptoms like delayed coat shedding, a pot belly, increased urination and sometimes blindness. With endocrinopathic laminitis the symptoms are identical to those of inflammatory laminitis but develop gradually and consist of many mini-episodes of some pain and lameness before becoming acute.

Regardless of type, laminitis can result in permanent lameness or euthanasia.

Along with observable pain, lameness and a saw-horse stance, the typical diagnostic tool for laminitis is tongs or hoof-testers that can induce a pain reaction to pincer-pressure when blood vessel and tissue inflammation is present in the foot. Newer technology, like Doppler ultrasound can also be used to assess levels of blood flow within specific vessels of the foot.

However, since laminitis is related to systemic inflammation or endocrine problems, assessing hormone levels, insulin production and measuring levels of circulating concentrations of lipids and ‘blood sugar’ have now been added to the roster of diagnostic tools.

Grain overloading, lush pasture consumption and obesity remain significant risk factors for laminitis, and there is some evidence that repeated concussion on hard ground can cause laminitis-like changes to the blood vessels and tissues of the hooves.

However, since research over the past 10 years indicates that gastrointestinal disease, endotaxaemia and endocrine disorders can lead to laminitis, overall metabolism and organ health are crucial factors.

Endotaxaemia refers to the presence of endotoxins in the blood generally due to certain types of bacteria from the gut that have breached the gut and entered the blood stream. Causes can range from colic and respiratory disease (such as pneumonia) to retained placenta in mares after foaling.

Endocrine disorders involve all types of hormone related diseases like Cushing’s Syndrome, and can involve functions of the adrenal glands, the pituitary glands, the pancreas, the thyroid, as well as the ovaries or testes.

In other words, the potential for developing laminitis likely lies in the health, operation and genetics of the gut or glands but requires an ‘ingredient’ such as an infectious disease, advancing age, or an excessively high-protein diet, to actually occur.

It is important to note that not all infections, extreme physical exhaustion or extra grain rations result in laminitis even in horses with underlying endocrine disorders or gastrointestinal problems. Other factors must at work and insulin is thought to be one of them.

The Importance of Insulin

Just as it is in humans, insulin in horses is secreted by the pancreas to move glucose (sugar from digestion of food) into tissues. Glucose, or blood sugar, is a simple sugar the body uses for energy. It is believed that abnormalities with insulin metabolism – that is the over-production, underproduction or inability to produce or absorb insulin – is last and direct trigger of laminitis.

The exact causal connection, or the mechanisms by which insulin causes laminitis, have yet to be determined, but new clinical research in Australia has opened one potential avenue for laminitis treatment.

The study followed 49 ponies with high insulin levels over a period of 39 days. For 18 days, researchers fed the ponies ‘rich rations’ of sweet feeds with plenty of grain and molasse. Each day the ponies were blood tested to determine glucose and insulin levels and were watched for signs of laminitis.

A dozen ponies received velagliflozin throughout the experiment. Velagliflozin is a sodium-glucose inhibitor that decreases blood glucose and insulin concentrations. The remaining 37 ponies were left untreated. Of the 37 untreated ponies, 14 developed laminitis. None of the treated ponies showed any sign of the condition.

Even with these promising results, researchers involved in the study point out that as effective as velagliflozin was in preventing laminitis despite exposure to high-protein diets, proper dietary management would have also prevented all 14 cases of laminitis.

Dietary management continues to be the best solution available at the moment which puts a tremendous onus on caregivers to prevent laminitis by managing and monitoring feeding regimes according individual horse’s age, activities, energy requirements and metabolic health.