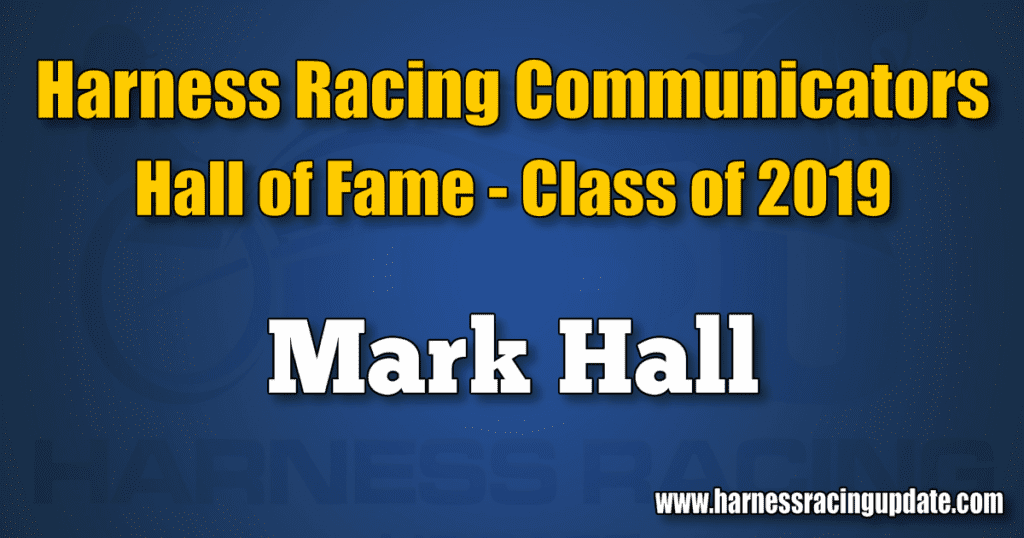 Photographer Mark Hall said his favorite image came as something of a tribute to his late mentor George Smallsreed.

“The first year of the George Smallsreed Award (for harness racing photographic excellence), I entered a picture and it was similar to what George used to take. I was also using his old lens after he died,” said Hall who joins Dave Little as the 2019 inductees to the Communicators Hall of Fame. “I was shooting up the stretch and the horses were coming right at me and you could just see heads. You always tried to get them without showing the drivers heads, only because when you send it to a different track to use for a program cover, you don’t want to see a driver that maybe races at another track… They were coming down the track single file, but it looked like there were six or seven heads straight across, and the first year of the Smallsreed I won with that shot.”

Smallsreed and then Hoof Beats editor Dean Hoffman — both Communicators Hall of Famers in their own right — had a profound impact on Hall’s early career.

“(Hoffman) didn’t like that standard shot. He would always say, ‘Go get something different!’ Then George would always say, ‘Go where they ain’t.’ That was his quotation. Back then, you didn’t need the finish line shot, you wanted good action of the horse and he had his little trademark of horses coming around the turn. He would shoot with a 600 lens real tight.”

Hall, a much loved and respected native of Columbus, OH, said his route to the Communicators Hall of Fame was also forged early on by his brother, Marshall, and late sister-in-law, Dee. Mark was first introduced to the sport by the couple, who campaigned a small fair circuit stable together in Ohio.

“Both he and his wife worked the eight-to-five (jobs) and then came home and got ready to go to the county fair. They’d get home at 10 or 11 and then get up and go to work again,” Mark said. “Nothing on the Grand Circuit, but it would be the county fair circuit in Ohio. Back then, in the ‘80s, there would be maybe 70 to 80 county fairs here in Ohio that had harness racing.”

Dee worked in the blood department at the USTA at the time and was the one that let Mark know about a job opening at the USTA in the photo department.

“I had graduated from Ohio State and I was just freelancing and I worked at a studio for a while. I just needed a change and this came along, so I applied and got it,” Mark said. “I started in August of ’82 and I’ve been here ever since.”

A record six-time Smallsreed Award winner, Mark, the photo editor at the USTA, said he was also blessed to work at the USTA with photographer Ed Keys, who is also in the Communicators Hall of Fame.

“I’ve always been on the other side of the camera seeing people get awards and it seems strange getting texts and emails, congratulations… that’s a little overwhelming,” Mark said. “I’ve seen other people win and I never thought about it, even with George and Ed going in there, I just thought, ‘That’s great for them,’ but I never really thought about it for myself. I’ve just been working and shooting, but now it’s kind of setting in a little bit. It’s hard to describe. It’s overwhelming and very humbling.

“When I was first nominated, I just went and looked at the names and to be considered, let alone nominated, is something else. Those were the people that made the sport.”

Though Mark is a 36-year veteran of the USTA, he said he’s never stopped trying to learn from other photographers.

“When I was doing UPI (United Press International) stuff back in the ‘80s we always would get a faxed copy of every picture that came across (the wire). I would love looking at the photos,” Mark said. “Even to this day, in the newsroom, looking at the (harness) pictures coming from all the other photographers in the sport, I don’t look at them to criticize, but more to learn… When I’m at the track shooting, I’m looking to see where everybody is because they may have a better angle than I do. What are they seeing that I don’t see. I give credit to all the track photographers and everybody else out there shooting because I’m still learning and trying to