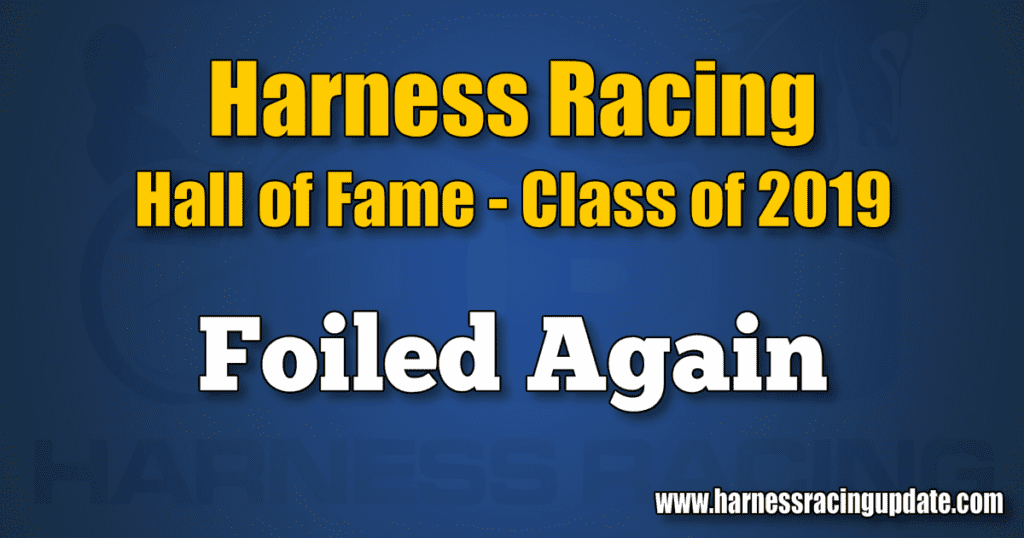 Statistically speaking, Foiled Again was a shoe-in Hall of Famer. He notched 109 career wins, banked more than $7.6 million in earnings and in the 2013 Franklin, Foiled Again set a world record of 1:48 for all-age pacing geldings on a 5/8-mile track, in a year that saw the Dragon Again bay, at 9-years-old, become the oldest horse to win a Breeders Crown.

But, for trainer and co-owner Ron Burke, who has won nearly 10,000 races in a storied career and campaigned the legend since his 4-year-old season, Foiled Again’s legacy is far more personal than just numbers.

“Because of him, I learned to love horses again,” said Burke. “I think I’d gotten to the point where I’d become so business like that it had become a job, and he reminded me how much I do love horses.”

In his ‘victory lap’ season, Foiled Again won 11 of his 28 starts, while traveling across the continent on a retirement tour that brought thousands of fans to the track.

“I made an effort to get to every one of those appearances — and I missed the Hambo last year — but I realized we were coming to the end of his career and I better embrace it and enjoy it because he wasn’t going to be there forever,” said Burke.

Burke said Foiled Again’s personal legacy extends beyond the connections to the fans themselves.

And Foiled Again rarely disappointed in a career that spanned from an October 2006 qualifier at Freehold to his final appearance on New Year’s Eve at The Meadows.

“Every year there was a new rival and then they’d be gone and he’d still be going,” said Burke. “That run through 7 to 9, he was the best aged pacer in the world. He separated himself and made himself special.”

There are too many superlatives to highlight in a single sitting, but Burke said the second-half of Foiled Again’s career is his strongest.

“The latter half. Without question. From seven to nine, the years he put together there were incredible,” said Burke. “And, the last year was just magic meeting all the fans. From the beginning to the end it was so much fun.”

When asked to pick out his top three Foiled Again moments, Burke had to ask for one extra spot to seal the pacer’s prolific output.

“For sure, the top moment is the Canadian Pacing Derby (in 2012) when he became the richest horse of all time, when he won at 14-1,” said Burke.

Sitting well off the pack in the Canadian Pacing Derby, the favored Betterthancheddar and Bettor Sweet had the jump on Foiled Again but the savvy veteran spilt rivals and notched a neck score, in the process surpassing Gallo Blue Chip as the world’s richest pacer.

“This has changed after thinking about it, but, I was in the grandstand for that and when they put his number up the whole grandstand cheered,” said Burke. “I remember thinking, ‘Wait, only four of us own him, but people were already that much invested into him.’”

Burke’s third moment came on July 8, 2018 when Foiled Again reached the century mark in victories at Harrah’s Philadelphia. In rein to Yannick Gingras, Foiled Again took the lead and never looked back.

“The hundredth win was special because people had started to doubt him and when he won it was the last milestone,” said Burke.

The final moment is yet another personal one for Burke and his co-owners Weaver Bruscemi LLC and JJK Stables.

“When he won his last stakes race in Buffalo, all of the owners were at Lexington watching on TV and when he won everybody was crying,” said Burke. “That’s a stoic group of people and none of us could stop crying. This horse is special. He’s done things nobody else would have done.”
Foiled Again is enjoying retirement splitting time between Burke’s training center and his parent’s farm in Fredericktown, PA where he has a custom-built barn in a roomy paddock.

But, fans haven’t seen the last of the ‘Iron Horse’ just yet. Foiled Again has a number of appearances scheduled for 2019.

“We put him back in training right now because I didn’t want him showing up to these appearances and not looking like the ‘Foiled’ they’re used to seeing, and he just enjoys it. You can tell he’s thrilled to be back,” said Burke. “He loves it out there just bucking and playing.”

Burke said the upcoming tours will be good for the sport of racing.

“I think because of the tours — and that people were able to go up and see him and touch him — that he will always be remembered fondly,” said Burke. “You remember the things you touch and see and that’s what we wanted with this. He wasn’t always a horse that loved attention, but at the end he absolutely lived and thrived on it.”

Now enshrined in the Hall of Fame, Foiled Again’s story will live on.

“People know the story and what a good horse he is and I hope they know how much we appreciate it,” said Burke. “All the owners, every groom that ever took care of him, all the drivers who sat behind him, we all really appreciate what a great horse he was.”