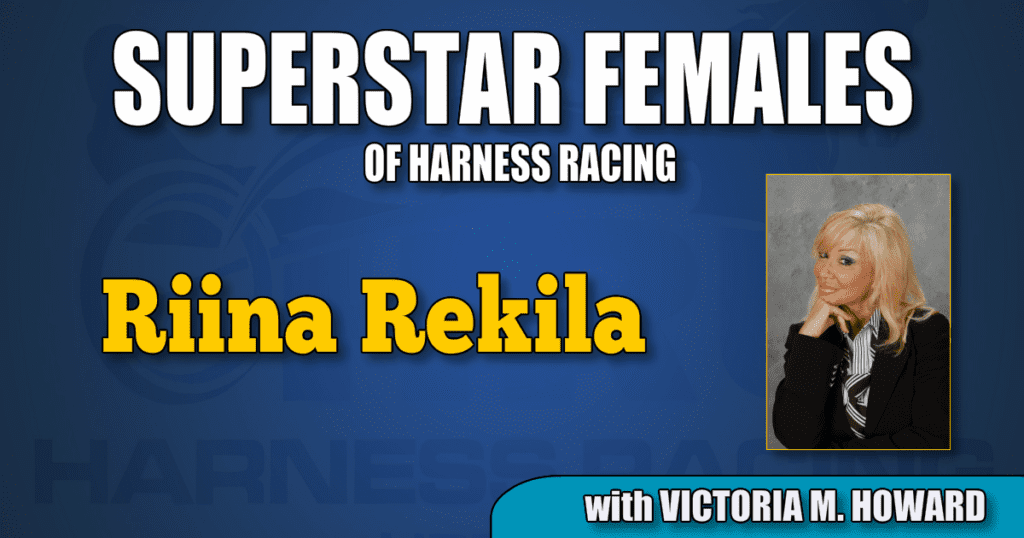 8,000 miles away in Hameenkyro, Finland lives a trainer who can rightfully take the credit for breaking/training and driving one of harness racing’s up-and-coming trotting stallions. Her name is Riina Rekila and his name is E L Titan.

The son of the great Muscle Hill out of Courtney Hall was a multiple stakes winner at ages two and three and earned $726,344 before starting his new career as a stallion.

As a 2-year-old, E L Titan was victorious at Red Mile in Lexington, KY winning in 1:53.4, holding off future Hambletonian winner Trixton. He got his lifetime mark of 1:51.2 at Pocono Downs as a 4-year-old, beating out Resolve.

Horse trainers have their own different methods of breaking and conditioning yearlings and E L Titan’s trainer has hers. Perhaps the colt’s success was because she was a woman who had the patience of a Saint and took her time in developing him. Her method of training was riding him under saddle or on the sand track at the farm.

“He wasn’t ornery, hard to handle or a studdy colt, but he certainly was the boss of the farm,” she said, laughing.

E L Titan, a homebred owned by Erkki Laakkonen, had all the confidence in Rekila and she didn’t let him down.

“E L Titan came to me as a yearling,” Rekila said. “When I picked him up from Cane Run Farm and saw him for the first time, I was thinking, ‘This is the horse I have always been dreaming about.’ He was well-made, well-muscled, smart, athletic, elegant, and looked more like a thoroughbred than a standardbred. I can say I had high hopes right from the beginning and when I started driving him I knew he was a very special horse.

“E L Titan was easy to work with. He had speed, strength, a lot of heart and enjoyed doing his work. My best memories are winning with him as a 2-year-old at Red Mile — beating the great Trixton. As a 3-year-old, he beat Father Patrick at Hoosier and the week before won The Maywood Gait Trot.”

At 13, Rekila learned to shoe horses and age 16 started working at a racing stable in Sweden where she worked four summers then began racing competitively for several prominent stables.

After Rekila graduated, she worked in one of the best veterinary clinics in Finland, but soon realized training and driving was her true calling at that time in her life.

In 2007, Rekila and her ex-husband Esa Lahtinen decided to make a move. After researching different tracks, they chose to go to Ontario, as the purses were attractive and Canada had a strong Grassroots program.

It didn’t take long before the blond-haired, blue-eyed woman proved she was not just another pretty face. The Finnish-born beauty showed she could train and drive racehorses with the big boys — and win.

Although she likes both, Riina admits she has always preferred training to driving.

“If you want to drive well, you have to drive a lot. I am now working full time as an equine veterinarian, so I don’t have that much time for driving.”

Today, the 37-year-old lives on a 135-acre farm that houses broodmares and yearlings. A special one to her is a horse named Random Destiny — another great horse Riina drove and trained.

Random Destiny was not only a great trotting mare, but is the dam of Walner.

“Random Destiny was the 2010 O’Brien Award Winner and Canada’s top three-year-old trotting filly. She earned almost $500,000 as a 2- and 3-year-old, won a few Gold finals, The Super Final, and The Canadian Breeders. I realized she was a very strong horse from day one and took very good care of herself. Unfortunately, she got hurt when she was turning 4 so we bred her. She was a tough mare who never got tired and ended her career with four straight wins.”

But Random Destiny’s legacy didn’t end there for it would continue with her son, Walner, who was the Two-Year-Old Colt Trotter in 2016. Unfortunately, the horse stepped in a hole causing an injury that ended his short racing career. He retired as a world champion with a record of 9 wins in 10 starts, earnings of $567,652 and took a mark of 1:50.2.

In fact, it was Random Destiny who put Rekila on the map. The mare won 11 races, banking $691,000 (CAD) and was victorious in the OSS Super Final.

“Another great mare I had was Christina Hanover. She won many stake races, The Moni Maker Trot and set a track record at Pocono Downs. She also was victorious in the Currier and Ives — which happened to be my very first win in the United States.”

Now living back in her country, Rekila is training and working as a veterinarian.

“Presently, I am training six horses: four 2-year-olds, one 3-year-old, and one 4-year-old. I still like to turn my horses out in the paddock for extended periods of time. In Canada, I had shelter and a paddock for each horse. I follow the same system in Finland where the horses have their own paddocks with run-in sheds and heated automatic waterers.”

The Finnish trainer has an incomparable work ethic and has made quite a name for herself in the business — rising to the top of the game. As pretty as she is, she is just as humble.