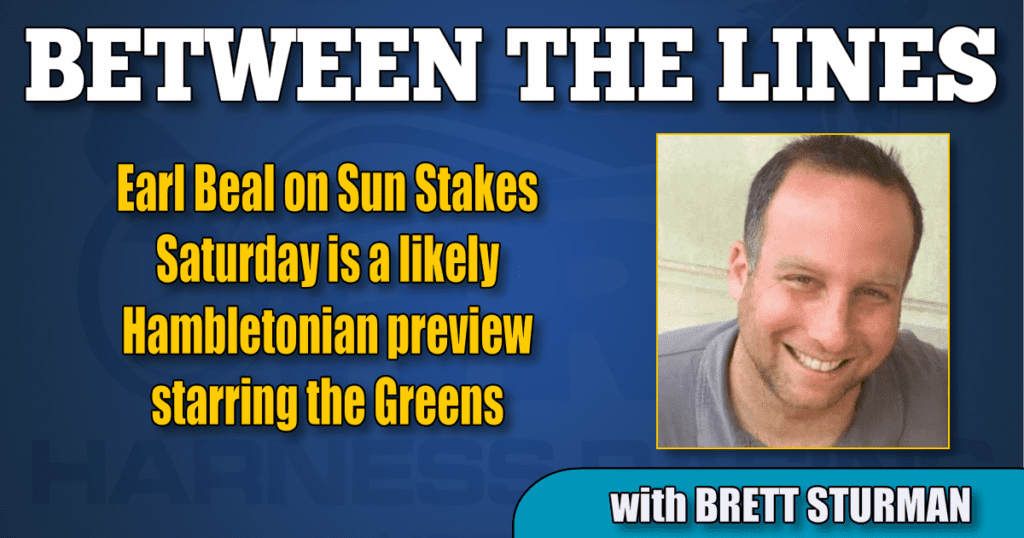 The $500,000 Earl Beal final is the anchor leg of $1.8 million in purses for four consecutive stakes races Saturday at The Downs at Mohegan Sun Pocono loaded with dynamic stars across the board. For 3-year-old colt trotters, it’s almost certain that the winner will be one of the ‘green’ horses – Greenshoe or Green Manalishi S – and it also serves as a completely realistic Hambletonian preview. Both trained by Marcus Melander, they appear at #’s 1 and 4, respectively, in this week’s Meadowlands’ Road to the Hambletonian update and first and third, respectively, in The Guru’s Road to the Hambletonian.

With the big two having drawn posts 1 and 2, the race is likely to shape up in the betting markets somewhere around Greenshoe at 2-5, Green Manalishi S at 7-5 and all others in double digits. Greenshoe has returned as a 3-year-old with a vengeance. He was vicious last year the couple of times he was able to stay flat, and this year’s he’s been able to combine that same speed with further maturity. The lone Father Patrick entrant in the Beal final (to oppose four Muscle Hills), he won his elimination last week with a stroll-in-the-park :54 and change back-half after brushing first-over. His race prior was 1:50.2 at the Meadowlands when he repeated as NJSS champ and it’s to be seen how much of a scare his barn mate can put into him.

It’s always easy to say it after the fact, but it’s really hard to believe that Green Manalishi S was dismissed as the third choice in the wagering last week in his elimination. Granted it was his first start of the year, but he proved ready at first asking and was able to outsprint a nice colt that had first run and establish a new career mark of 1:52.1 in the process. Seemingly has to be first or second throughout and will have every chance to take top honors if good enough.

By now there may have been exception taken to the Hambletonian discussion between the top Beal horses and no mention of Gimpanzee. One of the more fascinating subplots that includes these horses is what does driver Brian Sears do if Greenshoe wins the Beal, continues to remain dominant but Gimpanzee also stays unbeaten? Sears is the regular driver for both those horses and remarkably Melander trains Gimpanzee, too. It seems hard to think that any driver would opt off an unbeaten Breeders Crown and reigning divisional champion, but if Greenshoe continues to go the way that he is, I think it’s more likely than not Sears ends on him.

Immediately preceding the Beal is the $500,000 Ben Franklin final free-for-all and what a race this shapes up to be. If there had been in-race wagering in last week’s elimination, eventual race winner Lather Up would have been about 100-1 around the final turn. Seemingly having had things all his own way, something seemed to briefly go amiss as driver Montrell Teague tried to gather him up and, in the process, he was passed by at least a full length by McWicked. Somehow though, Lather Up came back again once on the straightaway and got back up. I don’t think I’ve ever guessed right on this horse ever, but I still think he remains too unreliable to back – this despite winning 4 of 6 on the year all against the best FFA types.

McWicked owns a history of shining at this track and I think he can be excused last week after having the unenviable task of going first over into a :56:1 half. It looks as though he’s still rounding into seasonal form making only his fourth start back and I’d expect Coleman to have him ready for a top effort when he’s handed over to Sears. Western Fame zipped around the Pocono oval last week to win in 1:48.1, a new lifetime mark for the 6-year-old and this year’s Levy series winner. It was a big bounce back from when he came up short when last seen in May. The Allard trainee is likely to be taken near the front by Dube. Fellow Allard trainee Springsteen had the best late pace of anyone last week in that elimination won by Lather Up. After saving ground throughout, he exploded late onto the scene to close in :26 in just his first start back on the year – could certainly be more coming now.

In the $500,000 Max Hempt, there are a couple of 3-year-olds in here that appear on many of the Meadowlands Pace contender lists. The Brian Brown-trained Proof is one of those, and he’ll likely play the role of favorite having crushed in his elimination last week and landing a big post edge on his main rivals for the final. In fact, the only horse inside of him is Lyons Night Hawk, who set a pretty quick clip last week on the front end but had no answers when pressed by Proof.

Captain Victorious was another 1:48-and-change elimination winner last week, and it came when he debuted on Lasix for trainer Ron Burke. Driver Yannick Gingras liked this one’s chances as a longshot two back in the North America Cup and he was somewhat validated with that open-length win last week. He has to leave to have any way into it and the only question is how hard he’ll be used early to gain position. Air Force Hanover couldn’t gain through the stretch in his elimination against front-end winner Shake That House, but he was used through a hot early pace and I wouldn’t discount his chances entirely. Hurrikane Emperor has a ton of speed, but so do many others in here and I’d rate him now as more of a longshot.

World champion filly Warrawee Ubeaut returned last week to the scene of her Breeders Crown triumph from last fall and she didn’t disappoint. She was able to rebound after going down in defeat by the slimmest of margins in the Fan Hanover and in the process turn the table on her emerging rival Treacherous Reign. Kind of like McWicked last week, Treacherous Reign had to go first over into unreasonably slow fractions and it looked for a moment in the stretch that she might not even hold on for the finals, though she did. Rubber match coming now, with Warrawee Ubeaut having the rail advantage. Odds On St Lucie rates a 20-1 morning line despite owning the fastest elimination win time and being 2 for 2 on the year for Tony Alagna – seems a bit high, doesn’t it? Even working out the pocket trip, it was impressive how she rallied up the inside and she picks up a new driver in Callahan and Dexter Dunn opts to Treacherous Reign as expected. Zero Tolerance was probably a little over-bet last week though she was still used fairly hard through a :54.2 half and 1:22.1 three-quarters time; will offer a good price for those willing to come back with her. Tall Drink Hanover is obviously talented but it would be tough to see her overcoming post 9.