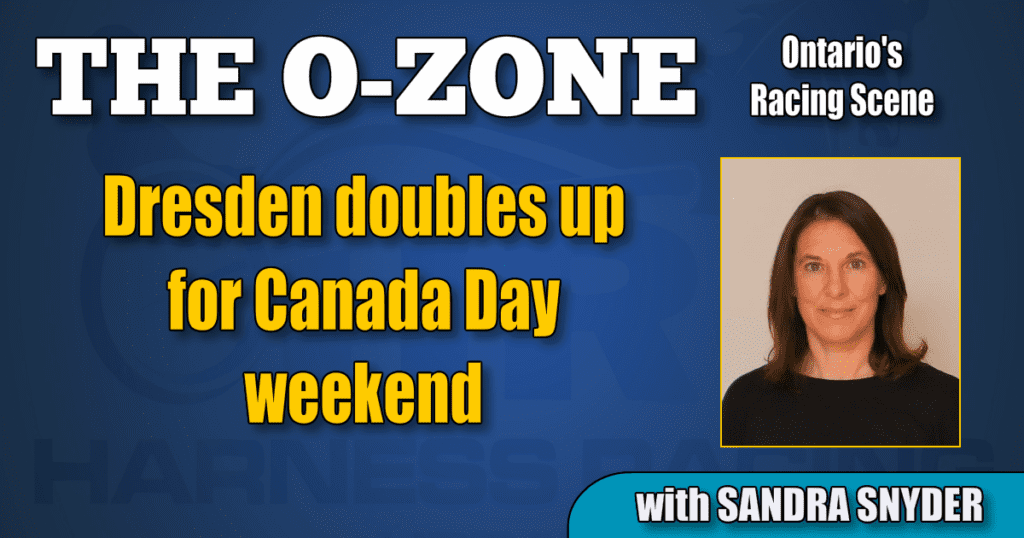 Malcolm MacPhail, the track’s biggest protector and fan, will be there as he has been for nearly 50 years.

Always a centrepiece of its racing season, this year’s Canada Day events at Dresden Raceway promise to be double the fun as the half-mile oval plays host to back-to-back cards on Sunday and Monday afternoon.

“Our Sunday card, because we were rained out a couple weeks ago, we asked for an extra date and they gave it to us,” said Dresden’s Gary Patterson, noting that post time for both cards is 1:30 pm. “So the first 150 people to come on Sunday and the first 150 people to come on Monday get Canada Day pins and Canada Day flags. And then on Canada Day itself we’re going to have cupcakes — we’ve got 500 cupcakes we’re giving away to celebrate Canada Day. Also, Ontario Sires Stakes 3-year-old trotting fillies are in the mix and the second leg of the Mark Austin Pacing Series is on Monday, too. So we’re looking for two solid days of racing.”

In addition to the added Canada Day festivities on Monday, Patterson said fans can also expect the usual wide variety of giveaways from local sponsors during both cards and noted that the Chase The Ace draw, new this year, should be up to almost $800 on the weekend.

“You know what, there’s a vibe around the track this year, it’s exciting,” said Patterson. “We have a brand new roof on the grandstand, so now we can get some painting done and some work done inside. We’ve just got, it’s a buzz, we’ve got lots of new people coming out, it’s reminiscent of older time racing. A lot people are having a lot of fun and they’re really enjoying it.”

Malcolm MacPhail, a fixture in both the grandstand and stable area of the Dresden oval since he acquired his first horse in 1972, is expecting good cards and good crowds on both Sunday and Monday.

“They should have a good do, with Sunday and Monday both,” said MacPhail. “(Monday) they’ll probably have about four divisions of sires stakes and maybe three divisions of the Mark Austin Pace.”

MacPhail’s 3-year-old pacing filly Origami Seelster (Sunshine Beach–Outofthefryingpan) was third in the opening leg of the Mark Austin Pacing Series, well back of winner Toxic Hanover, but MacPhail said she will be back for the second leg of the series that honors the memory of his long-time friend and former trainer Mark Austin.

“Mark Austin used to train for me all the time. We went down the road together him and I,” reflected MacPhail.

It was a long ago trip down the road to Bert Madill’s farm that saw MacPhail acquire his first standardbred. The life-long farmer arrived with a load of hay and left with a share in a racehorse.

“I bought a bunch of hay one time,” he said with a chuckle, “and I was going to sell it around the country and I sold a bunch to Bert Madill and I ended up buying a share of a horse from him. And then I bought another one and give it to Levi McFadden and then I just got into it.

Through nearly five decades, MacPhail has trained his own horses at Dresden Raceway, sent horses to other trainers and housed a small broodmare band at his Dover Centre farm. At present he has three horses, Origami Seelster and 5-year-old Shadow Play–Fade To Black mare Fading Shadow, both trained at Dresden Raceway by Mike Carther, and 2-year-old Angus Hall–Torch filly Torches Hotty, who is in the care of Owen Sound resident Paul Walker.

He is still a hands-on owner, recently shipping Fading Shadow up to Grand River Raceway for a June 17 race, but said those days are rapidly coming to an end.

“If she doesn’t get into Dresden on Sunday I’m going to ship her up to Grand River to somebody up there to race. I can’t fool around with this trucking. I’m 86 years old now and that trucking up and down the 401 is for the birds,” he said. “We went last Monday with her and we were 35 minutes at an accident on the way and we were 40 minutes coming back in construction so it took about three and a half hours each way to go to Grand River. That’s no good for me.

“(I’m) kind of low key anymore. I have them on television every night and watch them and I keep track of them. That’s what happens as you get old, you just settle down.”
While he may be opting for the comforts of home on most occasions, Patterson said that MacPhail and his wife Joanne and brother Bob are fixtures in the grandstand on race days, rarely missing a card.

“I’ve been there for almost 30 years and you know what, I don’t remember a time Malcolm was not sitting out in the grandstand in pretty much the same spot,” said Patterson, adding that MacPhail — who served for many years as the area director for the Ontario Harness Horse Association, including two terms as the organization’s president — has been much more than a spectator through those years.

“Back in the late ‘80s, early ‘90s we were really struggling at Dresden, there were lots of issues, and what happened is that Malcolm got together a group of guys and they formed a committee and a board and they were really the savior of Dresden Raceway, because they sorted things out and got things kind of back on track where they should be,” Patterson said. “Malcolm was just always common sense and a voice of reason, but he’s also got the wisdom behind it too, to know what’s going on in the game. He was just put in the Dresden Sports Hall of Fame this year for his contributions to Dresden Raceway, so that’s pretty awesome.”

The first inductee into Dresden Raceway’s own Hall of Fame in 2014, MacPhail was surprised and flattered to join the Dresden Sports Hall of Fame in the Legend category this past April. Among the accomplishments included in his induction night biography was his campaign to prevent Winrac Development, Windsor Raceway’s parent company, from closing the stables at Dresden Raceway in 2013.

“I didn’t take no guff from Windsor Raceway, in fact I was instrumental in bringing Windsor Raceway in there, so when they tried cutting things out I kind of stood up to them a bit you know,” said MacPhail. “I told them, in the contract when Tom Joy took it over he had no intention of ever closing the backstretch or anything like that, and I told them that they’d have to bring the sheriff in and put me and my horses out because I wasn’t moving. They changed their mind and we’re still there, so that’s what counts.

“Sometimes you’ve got to stand up for what you think. I’ve always done what I thought was right. Sometimes it works out, sometimes it doesn’t.”

The Gateway Casinos Dresden location will close on July 14 in preparation for the July 16 grand opening of the Cascades Casino Chatham, thirty kilometres to the south.

“You know what, as I tell everybody, we were here 150 years before the casino was here and we’re going to be here 150 years after they’ve gone I hope,” said Patterson. “Sure, without a doubt having the slots there brought in people and people would maybe come over, but I’m still a firm believer in that you’ve got players who love their casino and love the slots, and you’ve got players who love the horses.

“And I think that Ian Fleming does a tremendous job, week in and week out, giving us a great card of racing on and the horsepeople at the track, all the way from the owners, trainers and grooms, drivers, they put a great product on the track and I think that speaks for itself.”
T

he local owners, trainers, drivers, caretakers and fans will be out in full force this weekend, supporting Dresden’s back-to-back Canada Day weekend cards. Post time on both Sunday, June 30 and Canada Day Monday, July 1 is 1:30 pm.

Handicapping selections for Dresden Raceway’s Canada Day weekend cards, along with selections by Garnet Barnsdale, Michael Bozich and Michael Carter for other Ontario racetracks are available on the Ontario Racing website.