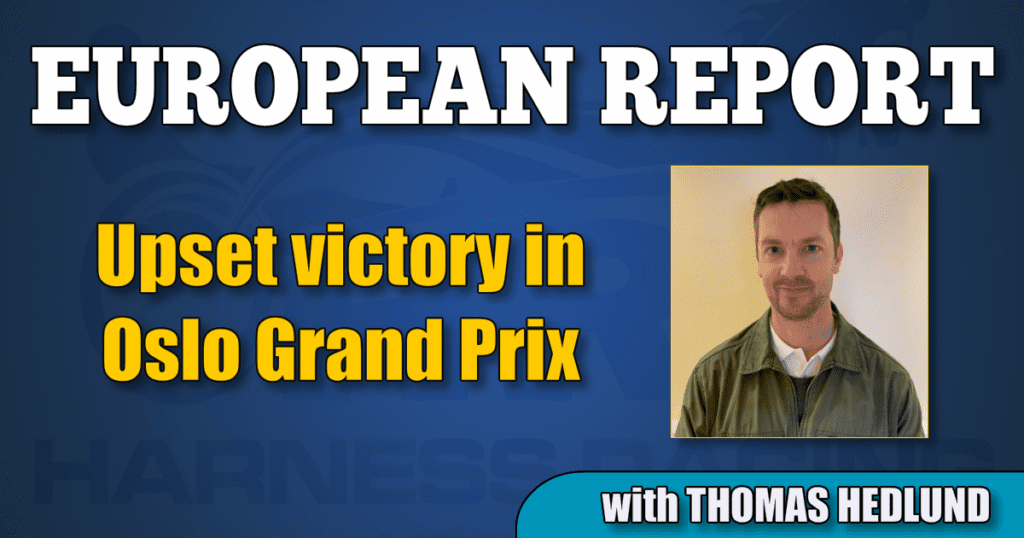 The $347,000 Oslo Grand Prix over 1.3 miles was held at Bjerke racetrack in the capital of Norway last Sunday.

A strong field with trotters such as Ringostarr Treb, Nadal Broline and Perfect Spirit made the race interesting, but when the story was told, another great horse stole the limelight.

Perfect Spirit disappeared at an early stage. The son of Andover Hall made a break in the first turn and his chances were gone, while Ringostarr Treb and driver Wim Paal had to do the heavy job outside the leader Slide So Easy the whole race. Wim Paal was not happy with Slide So Easy’s driver, Flemming Jensen’s tactical choice.

“For me, this is like driving without a brain! I have nothing more to say,” said the German pilot after the race. His Ringostarr Treb was pushed to the lead with 500 meters to go, but the heavy trip cost a lot and the Classic Photo son was beaten when he went off stride in the beginning of the home stretch.

Nadal Broline was served the perfect trip in second over for Björn Goop, but the 9-year-old Yankee Glide gelding was not at his best mood this day and finished many lengths behind the field.

So, obviously, an upset horse crossed the wire as winner in this year’s edition of Oslo Grand Prix.

Jorma Kontio was entrusted behind Alessandro Gocciadoro’s Vitruvio (Adrian Chip) and the Finnish top driver found a spot behind Nadal Broline from post nine behind the gate. With 500 meters to go, Vitruvio got a little bit too close to Nadal Broline and touched one of Björn Goop’s wheels with a leg. Vitruvio lost a couple of lengths and it seemed like his chances of winning the race totally disappeared, but the horses in front of him when the home stretch began were all marked by the pace and their respective trips, so Vitruvio’s strength was enough to pass a very brave Bahia Quesnot shortly before the wire.

The mile rate for the winner was 1:55.1 and Bahia Quesnot finished second ahead of Valokaja Hindö.