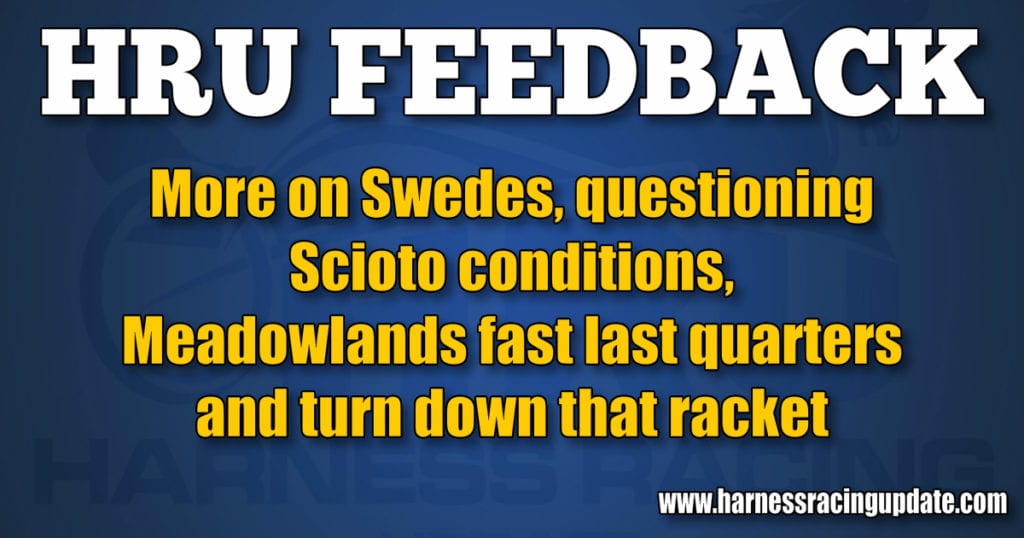 We can learn a lot from the Swedes

Thank you for the excellent update from Sweden. It should also serve as a wake-up call for the U.S. harness racing world.

I watched the exceptional high definition feed on Twitch.tv — thank you for the link!!! Would have never known about it otherwise.

If anyone watched the live Twitch feed of the Elitlopp on Sunday they would understand why the Swedes and the French can draw 50,000+ fans to their racetracks.

The feeds from the track, the camera and drone coverage of horses warming up, racing, and replays were ultra-high quality (high definition) and astounding. Not like the meager and disoriented feeds we get in the U.S. Our tracks appear to be annoyed that they have to send feeds to bettors and non-betting fans.

Drivers had both hands in the handholds, no slashing and whipping. No arrogance and disdain from the drivers. It was very unlike the thuggishness I can sense in many U.S. drivers, especially as they pound on horses through the stretch on so many occasions. No acrobatic driver leaning straight back in the sulky to string out the field.

The crowds appeared enthusiastic and truly sympathetic… not a whole lot of cigar chomping degenerate gamblers talking out of the side of their mouths.

The horses were beautifully turned out. Not one horse was lathered, washed out, or looked in distress unlike the many I see in post parades here daily. Could this possibly be because of the medication regulations in Europe? That was a rhetorical question.

No radical tongue ties, and many horses with NO HEAD CHECKS! If I see one more horse bleeding through its tongue tie at a U.S. track I’m not sure I won’t call the local humane society.

MANY horses with no boots. And NO TROTTING HOBBLES. When did the sport degenerate in the U.S. that almost every horse in a trotting event is hobbled?

If we could only get it right here our sport would, for certain, outlast thoroughbred racing, which is in imminent danger of becoming obsolete or outlawed.

We ignore the superb examples of our European counterparts at our own peril.

Thanks again for the coverage.

At some point in time a committee with questionable skill agreed to let the race office at Scioto Downs make decisions hurting horsemen. The cheapest condition races NW2000 and NW4000 last 4 have been overrun with big dollar horses stealing a cheap race. Every harness track in the USA except Scioto caps these races to prevent this.

I recently emailed Bill Crawford the executive director of the Ohio Racing Commission asking why Scioto Downs did not protect cheaper races.

“It is my understanding Scioto Downs has never had caps – and this was decided by the horsemen’s reps and OHHA’s reps. They have a two-class drop rule and that is subject to how the horse raced and where he raced. I would suggest talking to your horsemen representative.”

It’s that “how the horse raced” that is being ignored. In example, and there are many more:

Thank you for the forum.

Please turn down the music

During the interviews in your Twos in Training (videos) I find that the background audio is distracting.

It prevents the listener from hearing exactly what is being said from both the interviewer and the guest.

It would better to cut it out of the mix.

I went back a few weeks and checked the charts. This phenomenon is consistent across the board.

I started going to the Meadowlands when the track first opened.

Last quarters were quick back on the early years. Now, in winter the prevailing wind direction is out of the north or northwest. This is with the horses as they traveled in the OLD homestretch. Typically, the second quarter was the slowest of the 4. The last being the fastest.

Now that the homestretch is the east side of the track, the prevailing wind direction is up the stretch. That would mean the last quarters would not necessarily be timed faster. In this link, find the last three days’ hourly weather readings for Teterboro airport, located about 3 miles north of the race track.

Reading the wind column, you’ll note that on May 31, the prevailing wind during the evening hours was out of the west, avg velocity about 6 mph. Negligible effect. On June 1, the wind was out of the north. That’s into the horses as they travel the home stretch. One would presume this would create slower last quarters. Such is not the case. As of this writing, eight races have been contested. In each one, the last quarter was the fastest.

In my view, the last quarter issue is a matter of how each race is contested. Drivers are backing down the pace on the backstretch. The traditional “quarter move” is a rarity. Now, the horses are ‘walking’ to the half mile pole.