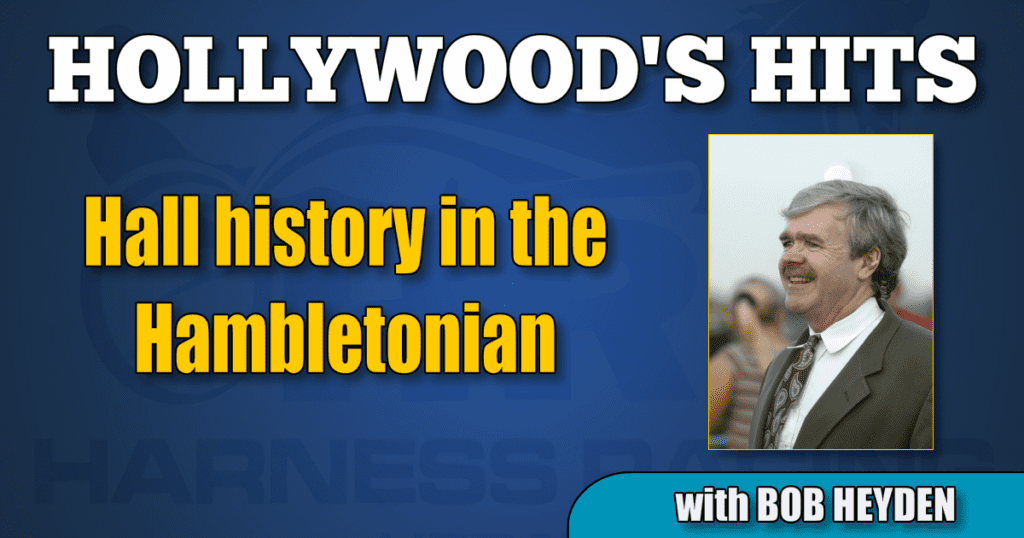 Hall history in the Hambletonian

Nineteen times a “Hall”-name horse has competed in the Hambletonian, even though there were 65 years from the first to the second “Hall” finalist (1933, 1998). Only two “Halls” have won an elimination and one a final.

In 1998, Conway Hall was fourth in elim and final.

In 2000, Monte Hall was eighth in the final. That same year, Heathen Hall was fifth in the elims, but did not make the final.

In 2001, Banker Hall was second in his elim as the 1-2 favorite (to Cigar Bar) and third in the final to Scarlet Knight and Pegasus Spur.

In 2002, Andover Hall was second in his elim, broke and finished last in the final as the 1-2 choice (He later sired 2007 winner Donato Hanover and the Oaks winner Danae from his very first crop).

In 2003, Amigo Hall paid $57 to win and was the only “Hall” to take down first prize in the Hambletonian. That same year, Ocala Hall was eighth in his elim and did not make it forward, neither did Caramba Hall, who was fourth.

In 2004, “Halls”: were second and third — Cantab Hall and Cash Hall, respectively — and Justice Hall got the final check. It was the only time that three “Halls” got money in the same Hambletonian. That same year, the Trotting Triple Crown drought ended with a “Hall” (Conway Hall) siring the winner Windsongs Legacy.

In 2006, Capetown Hall was ninth in the final after qualifying fourth and Algiers Hall was fifth at 56-1 for John Stark, Jr., the trainer/driver behind 2001 Horse of the Year Bunny Lake.

In 2008, Ace High Hall was fourth but didn’t advance to the final and Atomic Hall was ninth in the final. It was the second time that three “Halls” made it to the Hambletonian elims, with two out of three making the final. Velocity Hall was sixth at 75-1 as the longest shot in the field for David Miller.

In 2018, Mets Hall was second at 29-1 in the final. Team Miller hit the board for the third straight year — Sutton, Devious Man and now Mets Hall.

Note: There is no Broadway Hall on this list. He was undefeated in nine starts at two in 2002, but was unable to return at age three. Yet, that didn’t stop him from siring the 2011 winner Broad Bahn.

29 unforgettable days in the life of J L Cruze

In this one-month span, J L Cruze — driven by John Campbell for trainer Eric Ell and owners Wood, Iaquinto and Dittmar, Jr. — had as memorable a four-race streak as any trotter has ever had. You decide.

He won $434,150 in this streak that was completed entirely at the Meadowlands.

On July 11 in the $250,000 Graduate Final, Campbell drove the first sub-1:50 trotting mile in Meadowlands history. The 1:49.4 victory came over Shake It Cerry by a diminishing nose.

J L Cruze won the four races by less than a combined length. He won the four races over four different stars, Including a female Trotter of the Year. Father Patrick was a divisional champ, Sebastian K would own the world race record of 1:49 upon retirement, Shake It Cerry was the Trotter of the Year and missed a scant nose of becoming the first female sub-1:50 winner and Resolve would go on to win the Yonkers International for $1 million.